Use of spent bleaching earth for economic and environmental benefit

Since the advent of using clay to adsorb color pigments and impurities from edible oil, processors have been confronted with the problem of spent earth disposal. Typically, spent bleaching earth contains entrained oil in the range of 30 to 50% by weight. The entrained oil is in the form of a thin film spread over the immense surface area provided by the clay particles. Upon exposure to air, rapid oxidation of the oil film occurs and sufficient heat is generated to cause spontaneous combustion. Consequently, the most common method of spent earth disposal is to haul and bury it at a solid waste disposal site. Handling and disposing of spent earth is a fire risk, an operating expense, and a source of environmental regulatory concerns. In addition, the value of the oil that is lost is a significant cost.

For more than 100 years, ideas about practical uses for spent bleaching earth have been originated and tried without much success. Integrated oilseed processors and edible oil refiners have had limited success in adding some spent bleaching earth to meal by taking advantage of the allowable use of clay as a flow aid. Due to problems involving safe handling and uniform blending, the addition-to-meal practice is limited. There is some adding of spent bleaching earth to livestock feed in several countries, but the risk of spontaneous combustion is typically a barrier.

A new solution with positive feedback

In 2011, the author originated the idea that salt could be added and mixed with spent bleaching earth to eliminate the spontaneous combustion problem and provide a high-demand salt-lick product for livestock. A provisional patent was filed to protect the idea and to provide the time for validation. During the summer of 2012, experimental work was conducted to verify that the hydroscopic properties of salt, together with the dilution effect, would eliminate the spontaneous combustion problem with spent bleaching earth. The experimental work was carried out over a week using spent bleaching earth that came directly from an edible oil processing plant (Fig. 1). It was found that salt content as low as 35% would eliminate spontaneous combustion. To provide an additional safety factor, 45% salt addition was established as the minimum. 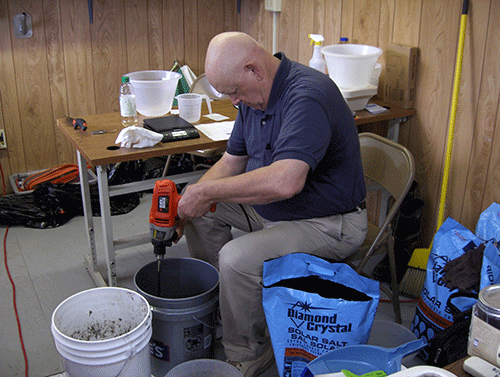 After the experimental work was completed, filing was initiated for a regular patent under the protocol of the international patent agreement. Following successful review of the patent application by the international board, applications have subsequently been filed in most of the livestock-producing countries of the world.

In June 2014, salt-lick products in block and granular form were produced for trial by five cattle producers in the US States of Colorado, Missouri, and Louisiana (Figs. 2 and 3). The feedback from these trials was universally positive. The inventor had no doubt about the expected outcome given his experience: 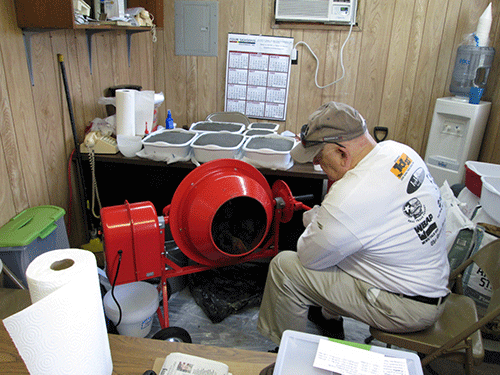 Fig. 2. The author mixes the products produced for the trial. 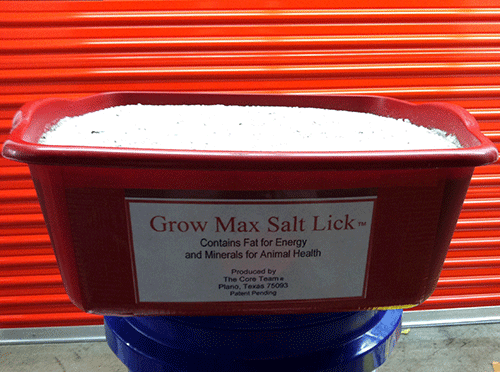 Fig. 3. The trial product was formulated to meet each user’s specifications with respect to the inclusion of minerals and/or protein meal.

For livestock, salt is supplied in solid blocks, pellets, and fine particles. From the perspective of supply, it would be desirable to supply the spent bleaching earth and salt mixture for livestock-lick products in all three forms. A literature search was made to determine what bonding agents have been commonly used to make solid blocks for livestock feed. It was found that Type I/II Portland cement has been used for that purpose in making a variety of livestock feed blocks in several countries. Given that Type I/II Portland cement contains about 75% calcium minerals, it is beneficial for livestock ingestion. For the solid block and pellet product, Portland cement was added at levels of 5, 10, and 15%. For the fine particle or granular product, a mixture of spent bleaching earth and salt is acceptable. However, adding 5% Portland cement as a desiccant and mineral agent prevents lumping during long-term storage.

Grass-fed (late spring, summer, and early fall periods) and hay-fed (late fall, winter, and early spring periods) livestock typically receive low levels of metabolizable energy (fat) in their diet. As a consequence, animals have to metabolize some muscle mass to provide sufficient energy to survive. Thus, during the grass- and hay-feeding periods, there is no significant weight gain. By providing salt-lick products that contain metabolizable energy, less to no muscle mass will be metabolized for energy, and the growth rate for livestock will be improved.

While there is no nutritional or mineral benefit, the adsorptive property of the clay does have value. Livestock feeding on grass and hay have the possibility of ingesting some heavy metals. The clay adsorbs these heavy metals and is discharged as waste.

Considering cattle alone, if all of the spent bleaching produced per year in the United States was used to make salt-lick products, it would satisfy only about 10% of the demand for salt based on 20 pounds of salt per animal. Taking into account the salt needs of cattle, sheep, goats, hogs, and horses worldwide, the available market overwhelms the potential supply.

On a global basis, the conservative numbers are:

For the United States, the conservative numbers are:

These numbers are deliberately conservative.

Those interested in exploiting this opportunity are advised to make their own calculations based on local conditions.

The scheme for producing an array of salt-lick products from spent bleaching earth is quite simple and involves standard equipment used in the livestock feed industry. Diagramed in Fig. 4, the batch production process involves the following sequence for adding ingredients to the product mixer:

Selection of the mixer type should be based on achieving product homogeneity and eliminating any ingredient lumps. On the initial production run to make product for livestock trial, a simple concrete mixer was used with acceptable results. The type, mixing time, size, and material of construction of the mixer should be determined on the basis of economics and the capacity needed. 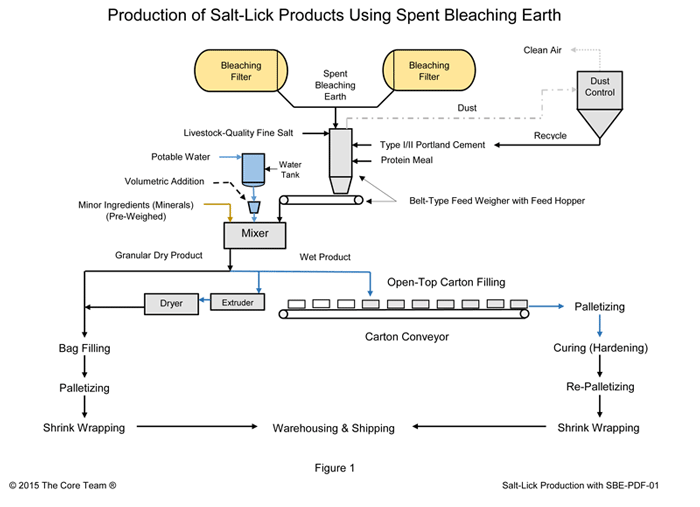 To make the lick blocks, product is discharged from the mixer into open-top containers (either milk carton-like paper board or plastic) positioned on a conveyor. Product is received and distributed by placing a multiple-container funneling device over the open-container tops before filling them.

Maximum use of gravity transport and lowest-cost production can be achieved by including the capability to make salt lick products in the design and construction of future edible oil processing facilities. At existing edible oil refineries, space is unlikely to be available for incorporating salt-lick product making at the bleaching process location. In this situation, the closest possible production site should be selected to minimize transportation costs and enable use of the existing infrastructure.

Given that using spent bleaching earth to make salt-lick products is a new business venture possibility, production-facility-location decisions can be made based on the lowest total cost. Cost considerations include transportation of ingredients to the production site, economy of scale for production, and transportation of finished products to distribution system locations. For enterprises with multiple edible oil refineries, this method would likely be advantageous. A business enterprise with no edible oil refineries would likely employ a similar approach.

Because exposure to air increases the risk of spontaneous combustion, US Department of Transportation (DOT) regulations require spent bleaching earth to be hauled within 24 hours after discharge from a bleaching system. However, mixing the spent bleaching earth with the prescribed quantity of fine stock salt at the edible oil refinery site eliminates this risk, and the restriction on haul time is negated.

Salt-lick products can be readily incorporated into large, vertically integrated agriproducts enterprises that produce livestock feed products. In this case, production can be launched at one production site and expanded as market demand develops.

Smaller enterprises with only one refinery would need to develop a market. This could be accomplished by negotiating agreements with livestock feed retailers, such as Tractor Supply Company, and promoting the product aggressively with independent livestock feed stores, farmer cooperatives, and cattlemen’s associations in the region of the production site.

Environmental implications and current use status

Aside from the economic benefits gained from product sales and eliminating the expense for waste disposal, producing salt-lick products could be a solution for companies that are seeking a more environmentally sustainable method for the disposition of spent bleaching earth.  Since the publication of the patent application, the inventory has received inquiries from potential users who are particularly concerned about their environmental vulnerability with the present disposal methods.

The inventor has applied for the registered trademark “Grow Max Salt Lick” for use with salt-like products containing spent bleaching earth. This trademark provides a brand name that is functionally descriptive. The trademark could be available for use by enterprises that obtain the right to exploit the patent.

To date, inquiries have been received from edible oil processors, livestock feed and mineral suppliers, and other interested enterprises. Discussions are ongoing. To date, no commitments have been made by the inventor to authorize use. Viable options will be identified and fully explored before any decisions are made.

Norman J. Smallwood is owner of The Core Team ®. He can be contacted at thecoreteam@verizon.net.