The other vitamin E

Many people have turned to personal care products or nutritional supplements that contain vitamin E in hopes that the celebrated antioxidant will prevent wrinkles, minimize scars, or protect against diseases such as cancer and atherosclerosis. The labels of most such products list “alpha-tocopherol (vitamin E)” as an ingredient. Yet alpha-tocopherol is only one of several chemical forms of vitamin E and, as recent research suggests, perhaps not the most beneficial one.

Alpha-tocopherol is the prevalent form of vitamin E in common dietary oils such as sunflower, peanut, sesame, and olive oils and is also the form best absorbed by the body. In the 1940s, reports began to surface that alpha-tocopherol’s ability to scavenge harmful free radicals could treat or prevent a host of health conditions.

As alpha-tocopherol gained popularity among researchers and health enthusiasts, the other members of the vitamin E family remained in the shadows. “For years there was a prejudice that alpha-tocopherol was the only form of vitamin E that mattered,” says Paul Sylvester, professor of pharmacology at the University of Louisiana at Monroe (USA).

But in recent years, scientists have discovered that a class of vitamin E known as the tocotrienols are better antioxidants and confer greater health benefits than tocopherols, although they are poorly absorbed into the bloodstream from dietary sources such as palm oil and cereal grains. As a result, researchers are now attempting to improve the bioavailability—the fraction of the ingested vitamin that reaches the target tissues—of tocotrienols. Meanwhile, the reputation of alpha-tocopherol has been tarnished by clinical trials that found no benefit and, in some cases, harm from alpha-tocopherol supplementation for diseases such as diabetes, stroke, and prostate cancer.

Although the eight members of the vitamin E family differ only slightly in structure, these differences translate to striking variations in activity and bioavailability. The two major classes of vitamin E are the tocopherols and the tocotrienols. These molecules share a phenolic OH group crucial for antioxidant activity, a chromane ring with variable methylation patterns, and a lipophilic tail that can embed into biological membranes (Fig. 1). Whereas the lipophilic tail of tocopherols is completely saturated, tocotrienols have double bonds at the 3ʹ, 7ʹ, and 11ʹ positions. The pattern of methyl groups on the chromane ring determines whether the chemical is alpha-, beta-, delta-, or gamma-tocopherol or tocotrienol. 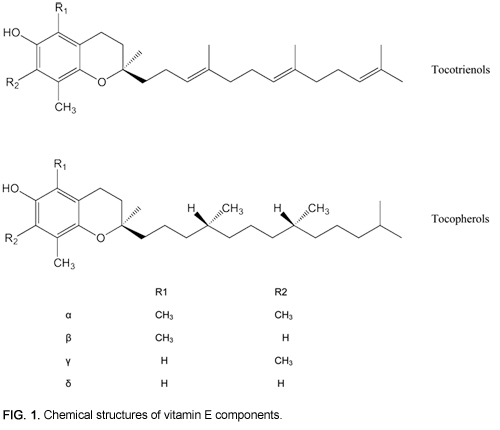 As a post-doctoral student in the 1980s, Sylvester developed an interest in tocotrienols after some surprising data emerged from studies in rats. “We knew that high-fat diets would stimulate the formation of mammary tumors in rats, but we wondered if the kind of fat matters,” he says. So Sylvester fed the rats different types of dietary fats such as corn oil, animal fat, and palm oil. All of the fats stimulated tumors, with the exception of palm oil. “We were trying to figure out what’s so great about palm oil,” recalls Sylvester. “Then we realized that the vitamin E in palm oil is about 80% tocotrienols. When we removed the tocotrienols from the palm oil, the protective effect disappeared, and the rats got tumors” (Sylvester, et al., 1986).

In addition to their anticancer effects, tocotrienols have been shown to lower blood cholesterol and blood pressure, reverse atherosclerosis, minimize brain damage after a stroke, regrow hair, and prevent skin aging from the sun (Table 1). Some of these benefits can be ascribed to tocotrienols’ antioxidant effect, whereas others arise from broader actions of the vitamin on cellular proteins and signaling pathways. 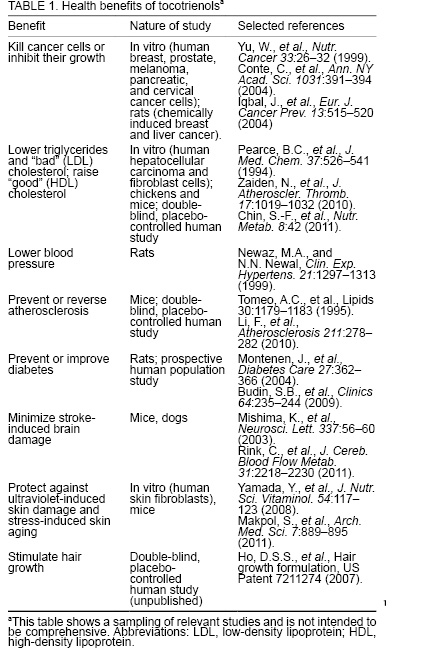 Other cosmetics companies are also investigating the incorporation of tocotrienols in their products, says Sharon Ling, vice president of scientific affairs in the United Kingdom for Carotech, the world’s largest supplier of tocotrienols. According to Ling, alpha-tocotrienol is 40–60 times more potent as an antioxidant than alpha-tocopherol and, when applied topically, penetrates the skin better than tocopherol.

Carotech, with headquarters in Perak, Malaysia, supplies mixed tocotrienols and other phytonutrients for use in dietary supplements, foods and drinks, and personal care products. In 1990, Malaysian businessman David Ho founded Carotech to extract phytonutrients such as mixed carotene and tocopherols from Malaysia’s abundant supply of red palm oil. When scientists began to recognize the unique health benefits of tocotrienols, Ho developed a molecular distillation process to extract a tocotrienol-rich fraction from red palm oil, the richest natural source of tocotrienols. The resulting Tocomin® series of products contains alpha-, beta-, delta-, and gamma-tocotrienols, as well as tocopherols, plant squalene, phytosterols, co-enzyme Q10, and mixed carotenoids.

Further, most published studies that show beneficial effects of tocotrienols have used cell culture or animal models. “The human trials on tocotrienols that have been published are, to be honest, pretty disappointing,” says Sylvester. “I think it all relates to the poor bioavailability of tocotrienols.” 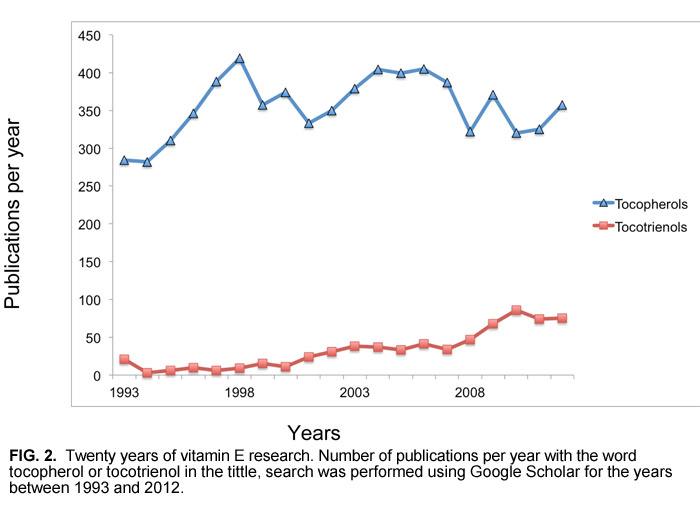 However, by formulating the tocotrienols in an efficient delivery system, researchers can increase their solubility so that they bypass the carrier proteins and passively diffuse through membrane channels from the small intestine into the bloodstream, like other water-soluble nutrients. Sylvester and other researchers have used drug delivery systems such as microemulsions or nanoparticles to enhance the intestinal permeability of tocotrienols (Abuasal et al., 2012). Sylvester notes that tocotrienols for cancer chemotherapy could be encapsulated in nanoparticles and injected into the bloodstream or directly into a tumor, thereby avoiding the problem of intestinal absorption completely.

According to Ling, Tocomin SupraBio® is the only tocotrienol product on the market that has human tissue distribution data (Patel et al., 2012). “This study proved that the tocotrienols in Tocomin SupraBio® are well absorbed and transported to vital human organs,” she notes.

Another approach to increasing the solubility of tocotrienols is to chemically modify their structures. For example, Sylvester and his collaborators at the University of Louisiana at Monroe have obtained a patent for carbamate ester derivatives of tocotrienols (Sylvester et al., 2012). The derivatives show improved absorption and resistance to breakdown compared with natural forms of the vitamins.

Increasing the absorption of tocotrienols is only half the problem, says Cesar Compadre, professor of pharmaceutical sciences at the University of Arkansas for Medical Sciences, in Little Rock (USA). “One hurdle is getting tocotrienols into the body; the other is keeping them in,” he says. Compared with tocopherols, tocotrienols have a very short elimination half-life, that is, the time required for half of the tocotrienol that enters the bloodstream to be eliminated (Table 2). For example, the elimination half-life of alpha-tocopherol (44 h) is 10 times that of alpha-tocotrienol (4.4 h).

The reason for the comparatively short half-lives of tocotrienols in blood has to do with a liver protein called alpha-tocopherol transporter protein (ATTP). Vitamin E circulating in the bloodstream is taken up by the liver. ATTP preferentially takes alpha-tocopherol out of the liver and secretes it back into the bloodstream. Because tocotrienols have a lower affinity for ATTP than tocopherols, they remain in the liver longer, increasing the chances they will be metabolized or excreted.

The X-ray crystal structure of ATTP reveals why tocotrienols bind poorly to this transfer protein. When ATTP binds alpha-tocopherol, it closes around the vitamin, causing alpha-tocopherol to fold deeper into the binding pocket of the transporter (Fig. 3A). In contrast, the more rigid, unsaturated tail of gamma-tocotrienol resists this close embrace, ruling out efficient binding. 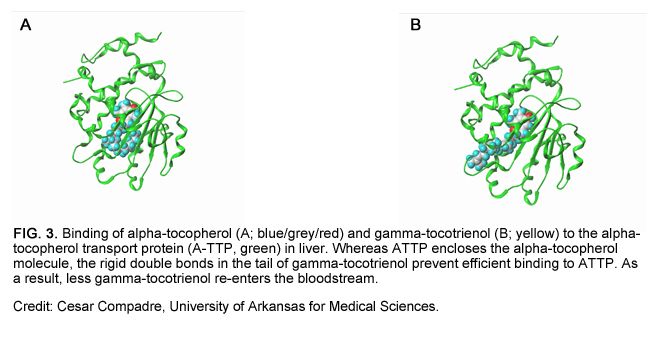 Philip Breen, associate professor of pharmaceutical sciences at the University of Arkansas for Medical Sciences, in Little Rock, notes that the literature accompanying many tocotrienol supplements advises taking one pill per day. “Let’s say you take it at 8 in the morning; by noon it’s mostly gone,” he says. “The other 20 hours of the day, all of the processes that cause oxidative damage, such as sunlight exposure and eating fatty foods, are still going on, and you’re not protected.”

Compadre adds that people would have to take a tocotrienol pill every four hours to get adequate antioxidant protection, which would be not only inconvenient but also expensive. “It’s great that commercial products are beginning to incorporate tocotrienols, but because they get eliminated so quickly, they’re practically ineffective,” he says.

In hopes of improving tocotrienols’ bioavailability, Compadre and Breen designed a class of synthetic tocotrienols that they call “tocoflexols.” Tocoflexols have one or two double bonds in their lipophilic tail, rather than the three double bonds of natural tocotrienols (Fig. 4). As a result, the tails are much more flexible and able to fold up for efficient ATTP binding. Breen and Compadre used computer simulations to screen hundreds of thousands of tocoflexol conformations for the ones that bind ATTP with the highest affinity.

So far, the researchers have shown in cell culture studies that tocoflexols protect cells from oxidative damage as well as tocotrienols, and get into the cells about seven times faster than tocopherols (unpublished results). Compadre and Breen are now planning to test the compounds in animal models. The University of Arkansas has filed for patent protection for the tocoflexols (WO/2011/153353 and PCT/US2013/30862), and Breen and Compadre founded a company called Tocol Pharmaceuticals to develop and commercialize the compounds.

To help support their tocotrienol research, Breen, Compadre, and their colleagues received funding from the US Department of Defense’s Defense Threat Reduction Agency (DTRA). The DTRA is interested in tocotrienols because experiments in mice have shown that the compounds protect bone marrow cells from radiation damage (Kulkarni, S., et al., 2010). Therefore, if tocotrienols can be made more bioavailable, they may prove effective radiation countermeasures.

“If, God forbid, there was ever a radiation accident in the United States like the one in Japan during the tsunami, people would have something to do,” says Compadre. “Imagine if everybody had a bottle of tocoflexol in their medicine cabinet. They could have it on hand in case anything nasty happens.”

But before tocotrienols become trusted staples of the medicine cabinet and the clinic, more research, especially human studies, needs to be conducted on the promising compounds. Further improvements to tocotrienol bioavailability are also needed before these long-neglected members of the vitamin E family can at last realize their full potential.

Laura Cassiday is a freelance science writer and editor based in Hudson, Colorado, USA. She has a Ph.D. in biochemistry from the Mayo Graduate School and can be contacted at lauracassiday@yahoo.com.