Hempseed oil in a nutshell

Industrial hemp is as a class of non-drug Cannabis sativa varieties, and hempseed is technically an achene, or nut. Both the seed and hemp's tall stalk provide significant carbohydrate feedstocks for a wide variety of industrial purposes in several countries. The oil pressed from hempseed, in particular, is a rich source of polyunsaturated omega-3 and omega-6 fatty acids, which are essential for human health. These same fatty acids in hempseed oil make it a fine drying oil that is used in the production of paints, varnishes, and other coating materials. Plastic flooring such as linoleum and similar materials have been made from hempseed oil, and other non-food uses of hempseed oil are similar to those of linseed oil (flaxseed oil). Flax, of course, also has a long history as a companion species that parallels hemp in the founding of our civilizations.

Unfortunately, when one reads the Latin words Cannabis sativa these days, the first thoughts that come to mind may not be of hemp, or its nutritious seed, or useful oil products, or even the durable outer bast (stem) fiber or the cellulose core from the stalk of this old-world plant. These lesser-known features of Cannabis were certainly well known to Carl Linneaus when he assigned its name in 1753. The words "canvas" and "cannabis," for example, both derive from similar-sounding words in Greek, Latin, and Arabic for the fabric and the plant from which it is made. The second part of the Linnean binomial, sativa, comes from the Latin word sativus, which means "sown" or "cultivated." Cannabis sativa is one of the oldest cultivated crops, and no other plants can provide such easily available food, oil, fiber, and even medicine. The largest obstacle that currently prevents hemp from fully participating in modern industrial agriculture is its botanical association with the drug cannabis. In fact, the production of THC (tetrahydrocannabinol) and other cannabinoids is under genetic control, so it would take an ambitious breeding project to convert a hemp variety into a drug variety, much like converting a dachshund into a Doberman pinscher. In other words, it would be much easier just to start with drug Cannabis seeds, if that were the objective.

Our historic foundations were built on the fibers of hemp

Ancient Asian mariners and more recent trans-Atlantic voyagers made good use of sturdy canvas sails made from hemp fiber. Fine linens were once made from both flax and hemp, as the fibers from the male hemp plants were well known to produce the finest linens. The oldest known paper from China was made from hemp, and many historical documents have been written and printed on paper made from hemp fibers. Even today, hemp fibers are found in such common products as tea bags, cigarette papers, and other specialty papers as well as paper currency.

The connection between Cannabis and its misuse as a drug gained official traction when the US Congress passed the Marihuana Tax Act on June 14, 1937; the Act included no practical exemption for hemp production. By that time, the United States was already importing most of its hempseed and fiber from countries with cheaper labor, and the timber and paper industries in the United States were completely invested in the Kraft process for making newsprint. In 1937, commercial wild bird feed was primarily made from hempseed, and hempseed was also pressed for oil used in the manufacture of paints, varnishes, and other coatings. Industrial-scale hemp production mostly continued in the USSR (Union of Soviet Socialist Republics) and China until modern petroleum products slowly began to replace products previously made from hempseed oil and hemp fiber. At least in the days of the USSR, hempseed oil for human consumption was called "black oil," because of its high chlorophyll content, which was especially used by those who were too poor to afford butter. Hempseed appears as an ingredient in many spices and ethnic foods from Eastern Europe, India, and most parts of Asia. A fine tofu can be easily made from just hempseed, water, and heat.

The Marihuana Tax Act of 1937 had very little impact on the use of marijuana as a narcotic in the United States, if for no other reason than the Act did not penalize the possession or use of hemp, cannabis, or marijuana. It did, though, penalize persons dealing commercially in these products. Thus, the Act effectively brought all industrial hemp production in the United States to a grinding halt by the next year. Subsequently, the United States re-introduced hemp production in 1942 for the war effort, after the Japanese had cut off hemp supplies from the Philippines and East India. (After the war, US hemp production was shut down yet again.) Petroleum-based polymers quickly replaced hemp and other natural fibers in many common products such as sacks, tarps, and ropes. In just a short time, a carbohydrate culture based on agriculture quickly shifted into a culture dependent on petroleum-derived hydrocarbons. Since then, hempseed and hemp fiber production have been excluded from the technological developments enjoyed by other industrial crops. Nor have there been any advances in nutritional research pertaining to hempseed oil. This prohibition on hemp cultivation continues to this day in the United States, even as remarkable advances are being made with medical marijuana. The irony deepens when one realizes that the main psychoactive component of drug Cannabis, THC, has been available as a synthetic pharmaceutical in the United States as Marinol® (dronabinol) since 1972.

In Canada marijuana is already available to registered patients for medical purposes. After years of prohibition, hemp cultivation was cautiously restarted there under heavy licensing in 1998. With eager markets in both Canada and the United States, hempseed oil and other hempseed food products remain in high demand, and the area devoted to oilseed hemp cultivation in Canada has continued to expand accordingly during this time. The Finola oilseed variety of hemp continues to form the cornerstone of the Canadian hempseed production because of its short stature (average plant height: 1.5 m), which allows for mechanical harvesting by a grain combine, and because of its exceptionally high seed yield (over 2000 kg per hectare, under irrigation).

Hempseed as an exceptional food and oil SOURCE 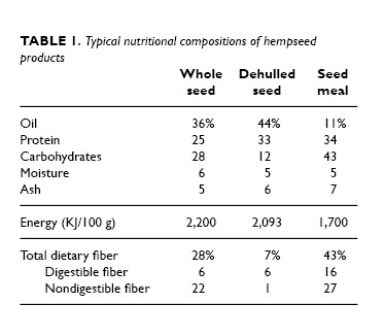 Aside from being extremely low in saturated fats, hempseed oil is interesting in other ways. For example, hempseed oil has a higher content of polyunsaturated fatty acids (PUFA) than most other industrial food oils (Table 2). This has been known for quite a long time, as the essential omega-6 linoleic acid (18:2n-6) was first identified in hempseed oil as "sativic acid" by German chemists in 1887. More recently, presence of omega-3 stearidonic acid (SDA, 18:4n-3) has been detected in hempseed oil (Callaway et al., 1997).

Good amounts of the other essential fatty acid (EFA), α-linolenic acid (18:3n-3), and omega-6 γ-linolenic acid (GLA, 18:4n-6) are also found in this oil. Not only are both of the essential fatty acids (EFA) well represented in hempseed oil, but their direct human metabolic products, GLA and SDA, are too; the latter are not found in any other industrial oilseed crop. This is significant because both dietary EFA must compete for the enzymatic activity of ∆6 desaturase to produce GLA and SDA. As these two fatty acids are already in the oil, this enzymatic step can be bypassed, so they contribute more directly to the downstream production of other omega-6 and omega-3 metabolites.

Perhaps the really good news for consumers is that good-quality cold-pressed hempseed oil has an excellent taste that resembles walnuts and sunflower seeds. When the seeds are toasted, a savory umami flavor develops somewhere between that of bacon and fried prawns.Moreover, the balance of EFA in hempseed is considerably more nearly optimal than in most other industrial food oils, in terms of having a relatively low omega-6 to omega-3 ratio. In this regard, hempseed oil is more like rapeseed oil (also known as canola oil), yet it is still much higher in polyunsaturates. Taken together, these factors at least partly explain a remarkable number of anecdotal benefits from consuming daily hempseed oil, for example, especially marked improvements in skin, hair, and nail quality, as these fatty acids are integral in cell membrane formation and functions at the molecular level. Studies at the University of Kuopio, Finland, have investigated some of the properties, and particularly the improvements in skin quality for patients that suffer from atopic dermatitis (i.e., eczema). Improvements in strength of both hair and nail thickness are also attributed to daily use of dietary hempseed oil.

The high level of PUFA in hempseed oil is certainly a plus for health, but a considerable drawback for deep frying, not only because there is an increased risk of peroxide and trans fat formation, but also because hempseed oil has a relatively low flash point and will burn well once it is ignited. Also, the shelf life of hempseed oil tends to be rather short, because this high level of unsaturation provides more opportunity for oxidation with atmospheric oxygen. Ideally, as a food, hempseed oil is cold pressed from fresh, clean, good-quality seed and then stored in a cool, dark place before, during, and after processing. Unfortunately, much of the hempseed oil that is currently available in North America is distributed in plastic containers to reduce the costs of both production and shipping of this niche crop. Oil purchased in plastic is more susceptible to degradation with time. With a small amount of effort, the interested buyer will typically find hempseed oil in glass bottles on the European markets.

To this day, the US government continues to define hemp as the stalks and fiber of the marijuana plant, and has decided not to recognize any of the varieties that are extremely low in drug content. An analogous situation exists for poppy seed, which is legal in the United States; the seed always contains some measurable amount of morphine, but these amounts are not of sufficient concentration for drug purposes.

Due to the burden of Cannabis prohibition, there has been very little development or innovation in hemp or hempseed production during the last 70 years, and almost no research on hempseed nutrition since its incorporation into Chinese medicine thousands of years ago. It is, in essence, an orphan crop when we consider the present situation of food production in Europe and North America. While this situation began to change with the reintroduction of hemp to Canadian agriculture in 1998, the subsidy scheme for hemp in the European Union continues to favor the production of hemp fiber and not hempseed. What few results we now have from hempseed research tend to contradict the politically narrow horizon that the United States has offered the world. Fortunately, hempseed oil and other hempseed food products are legally available in the United States, either from the shelves of some natural food stores or when ordered directly online from Canada. Viable hempseed, however, remains illegal in the United States.

Leaving political rhetoric aside, there is plenty of convincing scientific evidence to show that hempseed is one of the most nutritious products that can be produced by modern industrial agriculture. As a grain, it fits into the mechanized infrastructure without retooling. Apparently, the only remaining change that needs to be made is to convince US policymakers that hemp is not dangerous.

For more information about hempseed oil, see the "Hempseed Oil" chapter by J.C. Callaway and David W. Pate in the Gourmet and Health-Promoting Specialty Oils monograph, published by AOCS Press. Edited by Robert A. Moreau and Afaf Kamal-Eldin, Gourmet and Health-Promoting Specialty Oils is the third volume in the AOCS Monograph Series on Oilseeds. Learn more at http://tinyurl.com/gourmet-oils-aocs . See a review of the book on page 164.