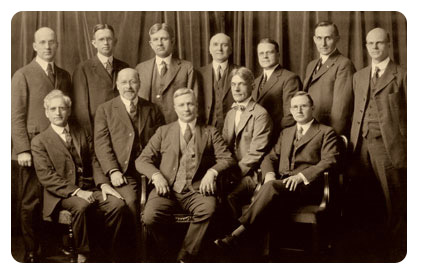 Our history is one of success built on the contributions of hundreds of volunteers over the past ten decades. At the start, there were nine dedicated individuals who created the Society of Cotton Products Analysts, as AOCS was first known. These nine charter members sought to offer proven methods for analysis of cottonseed products, the need for which still forms the basic foundation of AOCS.

Read a Full History of AOCS
As presented by George Willhite in his INFORM magazine series.

1909 • Chemistry, especially oil and fat chemistry, was in its infancy in the first part of the century. The AOCS is formed (originally named the Society of Cotton Products Analysts) in May 1909.

1910-1919 • Nine years after this revolutionary society was formed, its first book, Official Methods and Recommended Practices of the AOCS, is published in 1918.

1921 • "There were so few trained chemists among the probable membership that it was decided to adopt the name of Cotton Products Analysts. As the industry grew, it came to depend on chemistry more and more. Many of the leading chemists of the country joined the Society and its name changed in 1921 to the American Oil Chemists' Society." David Wesson at the mid-year meeting of the society, October 28, 1927.

1930-1939 • "Cottonseed Oil Leads in the Margarine Production. This is the first time on record that cottonseed oil has taken first place in the margarine production and  is the first time since 1919 that coconut oil has not held the lead. The year's consumption of cottonseed oil by the margarine industry totaled 137 million pounds, or 43 percent of all oils used..." From Oil & Soap magazine, October 1937.

1970-1979 • In 1972, the first AOCS monograph is published: Tumor Lipids: Biochemistry and Metabolism by Randall Wood. AOCS hosts the first World Conference on Oilseed and Vegetable Oils Processing Technologies in Amsterdam in 1976.

1990-1999 • In 1990, INFORM is launched and JAOCS becomes strictly a peer-reviewed journal. In the same year, the concept of topical divisions within AOCS is first identified. Eight of the current 12 divisions are organized the following year. By 1995, AOCS membership surpasses 5,000 members. In 1998, the AOCS Soap and Detergents Division launches the Journal of Surfactants and Detergents (JSD).

2000-2010 • Online versions of two AOCS press journals, JAOCS and Lipids, debut in 2001 while INFORM becomes available online to all AOCS members in 2002.  Internet expansion continues when the AOCS begins posting podcasts with authors on its Web site in 2006.