FIG. 1. Pumpkin oil has an intense nutty taste and is rich in polyunsaturated fatty acids. High-temperature roasting improves its aromatic quality, but cooking destroys its essential fatty acids. Consequently, it is primarily used as a salad dressing.

Artisanal-style food claims are all the rage among consumers. Words like raw, natural, or cold-pressed on packaging have been shown to increase sales (http://www.foodnavigator.com). Such terms convey that a minor amount of processing has occurred, and when processing did take place it was not too harsh to strip the food of important nutrients. In 2018, the Global Nutrition Report justified shoppers’ beliefs with data showing that industrially manufactured foods are often higher in sugar, salt, and saturated and trans-fats, while being lower in protein, fiber, and nutritionally valuable micronutrients, like vitamins and antioxidants. (http://globalnutritionreport.org).

The food industry trend toward minimizing processing and getting back to basics has now expanded to fats and oils. Lard, butter, and coconut oil, once shunned for their high saturated fat content, are touted by celebrity chiefs as the unindustrialized fats our ancestors used. Likewise, the market for organic and cold-pressed oils is growing. According to a report produced by Business Wire, cold-pressed oils represented $24.62 billion of the North American market in 2018, and they are expected to experience a 5% growth over the next eight years (Fig. 2).

“We see that there is a growing trend with these minimally processed oils, the cold-pressed oils, the organic oils,” says Marc Kellens, global technical director for the oils, fats, and oleochemicals division at Desmet Ballestra in Brussels, Belgium (http://www.desmetballestra.com/oils-fats). “Their market share will continue to grow and affect that of industrially processed oils. The only question is: How quickly?” 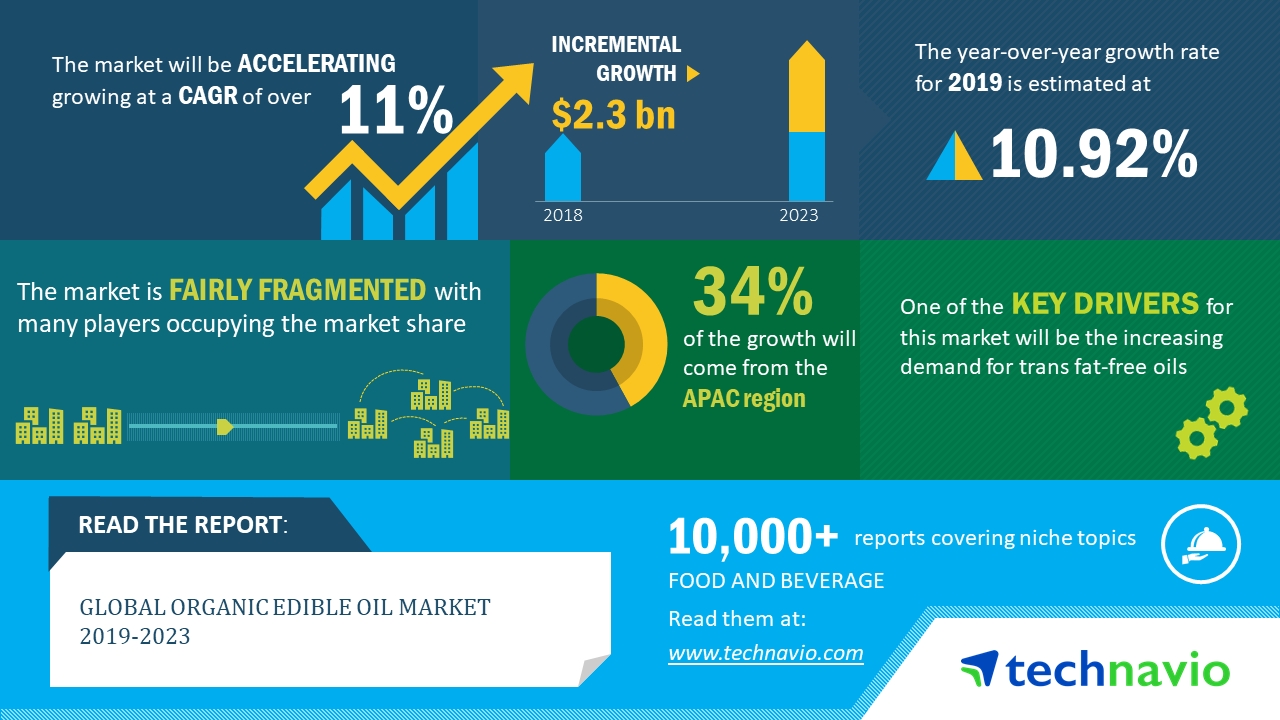 Food processing started out as a means of long-term storage and transport. Smoked or cured foods kept better than raw. Pasteurization and other heat treatments later increased food safety, reducing spoilage and killing pathogens. For the past 50 years, the food industry has expanded this technology to provide its customers with convenience and taste. Now those consumers are concerned that convenience is coming at the cost of good health. Obesity and diabetes rates have risen steadily for decades, and more research is connecting processed foods with weight gain and depression (https://doi.org/10.1016/j.cmet.2019.05.020).

Vegetable oils are sourced from plants for use in frying, baking, confectionary, salad dressings, and for making margarines and spreads. Isolating purified triglycerides from plant material requires heavy processing. Diliara Iassonova, a food service development leader at Cargill in Minneapolis, Minnesota, USA, says that vegetable oils have a public relations problem (https://www.cargill.com/food-beverage/na/edible-oils). “The public doesn't have information about how oil is processed,” she says. “When they hear how many steps a vegetable oil has to go through, it terrifies them.”

These processes are familiar to Inform readers, so this article will not cover every detail. In general, vegetable oilseeds are mechanically crushed as the first step in producing an edible oil. Sometimes the seeds are thermally treated to increase the release of oil during pressing. If no heat it used, the oil is referred to as cold-pressed. Depending on the plant source, the seed may still retain more than half its oil content after pressing. Washing the seed cake in hexane extracts almost all that remains. This crude oil is then filtered to remove particulates, refined and bleached to remove colorants and oxidative compounds, and deodorized to remove odor and taste. The result is what is known as an RBD oil, a refined, bleached, and deodorized oil consisting of mostly triglycerides.

In addition to concern over so many manufacturing steps, a public mistrust may have grown out of the processes used to modify the properties of oils once refined. Partial hydrogenation, once used to increase hardness and stabilize fats, results in the formation of trans fatty acids, now banned in most countries for their link to health problems.

All these factors have led some consumers to associate unprocessed oil or fat with better health. Even market reports on such oils reference them as being better-for-you foods as evidence of their future sales potential (http://www.businesswire.com). “Cold-pressed oils are safer than hot-pressed oils and avoids adverse effects caused by high temperature,” states the Business Wire. “Moreover, these oils have better nutritive properties than refined oils.”

According to Kellens, less processing addresses another consumer concern: the health of livestock. Edible oil refining produces fats- and oils-containing byproducts like soapstock, gums, spent earth, and distillates that are sold for animal feed. “Consumers believe that what you feed to the animal today, you eat tomorrow,” Kellens says. Across Europe and the United States, he sees a shift in the philosophy of animal feed millers. Where they once formulated with secondary or waste oils left over from refining, they prefer to directly receive seed cake with a higher natural fat content. Kellen says that means in Europe, processors who previously extracted rapeseed with solvent are considering going for full-pressed rapeseed. They do not view leaving 4–6% residual oil behind in the cake as wasteful, because they can sell it as higher-quality livestock feed and get more money. “We have several customers who are planning to replace their solvent extraction plant with a full pressing plant,” says Kellens.

Farm to fryer to fuel

One of the most organized efforts to produce full-pressed, small-batch edible oils in the United States came out of the sustainable agriculture movement. The closed-loop potential of growing the seed, using it to cook food, and then turning the spent oil into biodiesel for farm equipment, fulfilled one of the pillars of the movement: an efficient use of resources and natural biological cycles. The reality was that producing edible oils sustainably turned out to be more of a challenge than expected.

In 2013, through a grant from the Northeast Sustainable Agriculture Research and Education (NESARE), researchers at Pennsylvania State University, University Park, and the University of Vermont, Burlington, set out to decentralize US edible oil production (https://www.northeastsare.org). They studied how to grow canola, sunflower, safflower, flax, and other oilseed crops in the northeast and educated farmers on post-harvest processing of the oils.

“This was one of the foods that had not really been produced locally,” says Heather Darby, an adjunct assistant professor for the University of Vermont Extension. She and the NESARE team produced fact sheets on small-scale edible oil production and small-scale, post-harvest processing. Then they attempted to make their locally produced oils deep-fat-fryer compatible and realized more processing would be needed. “There are a lot of impurities in it, and it causes everything to smoke,” says Darby. The scientists tried to come up with new ways to bleach and deodorize without resorting to industrial processes, but they eventually questioned the value of their efforts.

An initiative in North Carolina met a similar fate. In 2013, a collaboration formed between farmers, restaurant owners, and a biodiesel manufacturer who hoped to produce locally grown oil seed to process for regional buyers. Seven years later the project was discontinued (http://blueridgebiofuels.com/cookingoil).

Although some customers were fans, the oils never developed enough of a market to support the farmer’s production costs, Darby says. “Every farm in Vermont that was selling oil is no longer selling it,” she says. “They are still in business as farms, but they have stopped selling the oil.” She speculates that they might have been ahead of the minimally processed oils trend, but there is also a deeply engrained cultural norm to overcome.

Because unrefined oils are not bleached or deodorized, they have a flavor and aroma that can be unappealing to US consumers. Conventional oil processing removes the nutty flavor of crude canola oil, for example, or the distinct flavor of sunflower seeds from its oil. So far, olive oil is the only cold-pressed oil flavor to be universally accepted by consumers. “People don't want their French fries to taste like mustard or sunflower,” says Darby.

“The processes in the food industry provide a clean, standard-flavored oil that will deliver on its intended function,” says Iassonova. “They deliver mouth feel, they deliver heat transfer, but if you work with pressed oils you have strong flavor.”

Beyond flavor compounds, crude oils can include phosphatides, trace metals, pigments, waxes, polycyclic aromatic hydrocarbons, and pesticide residues. These impurities limit the use of the oils to low-heat applications, like dressings. “Most applications cannot use just expeller-pressed oil,” says Iassonova. “Frying requires refined oils. RBD processing leads to mostly triglycerides with minimal mono- and di- and minimal free fatty acids that lower the smoke point. The result is a non-polar substance with a high smoke point for frying.”

However, not all the minor compounds in fats and oils are undesirable. Retaining nutritional and protective compounds like phytosterols and tocopherols requires an in-depth understanding of the technology behind refining processes. “If the deodorization process is set up correctly, theoretically you can keep close to 85% of the tocopherols. Theoretically you can preserve almost everything,” says Iassonova. She says the stability and freshness of the final oil depend on the refining, and processors want to get it right.

Though Cargill’s main focus is refined oils, to align with consumer demand they offer a range of organic and non-GMO oils for their North American market. In addition, Iassonova says they are producing expeller pressed refined oils Though, demand for these oils is significantly lower compared to the billion pounds of refined oils they produce per year. Cargill is keeping an eye on the market to determine when or if they should expand expeller production. And, she says Cargill is investing research dollars to optimize clean processes that satisfy the current consumer demand for fewer industrial interventions to their food.

Aside from the challenge of getting customers in some regions to accept new flavors, the issue of affordability remains. Depending on the oil and the extent of processing, the cost can be two to three times what the consumer is used to paying for current commodity oils. “It is difficult to say how big the market for these oils will grow, because it all boils down to economics,” says Kellens. “Is the consumer ready to pay extra for these oils?”

Kellens predicts that growth will come from developed countries in North America and Europe, where more consumers have knowledge of the product and disposable income to take a chance on a new oil. Then it could slowly grow in other regions.

“There is a reason why oil is refined,” says Iassonova. “They [refined oils] offer convenience, predictability, and consistency.” Adjusting to new consumer expectations may be the biggest hurdle of all for minimally processed oils.