Lipid co-oxidation of proteins: One size does not fit all

In foods, proteins are key targets of lipid co-oxidation. Studies in model systems have documented that all stages of lipid oxidation—radicals, hydroperoxides, epoxides, and carbonyl products—damage proteins extensively. Results are formation of protein radicals that lead to oxidation of amino acid side chains, lipid adducts, scissions, aggregation and crosslinking, loss of solubility, denaturation and changes in conformation, modification of surface residues that increase surface hydrophobicity and alter protein functionality, and loss of nutritional value.

Theoretically, one size does not fit all in protein co-oxidations, that is, the exact pattern of damage should vary with protein conformation and amino acid content, with lipid/protein ratios, and with reaction environment. However, there is relatively little validation of this expectation since protein co-oxidation is rarely tracked in intact materials. The importance of co-oxidation is rarely recognized, it is difficult to separate damage induced by processing (e,g., hear and shear), and the analytical challenges of determining detailed protein changes and the lipid oxidation products responsible are significant. To begin building a database of protein co-oxidation, we have investigated protein modifications in a number of different foods. Results in two systems—baked vs. fried tortilla chips, and peanut butter—demonstrate clearly that protein co-oxidation varies with the protein, system composition, and system environment.

Co-oxidation of proteins in tortilla chips

Tortilla chips were selected as a test system because the composition and treatment of the corn base are the same, including the heating temperature, except frying leads to adsorption of significant amounts of oil that oxidizes and mediates co-oxidations. Thus, baked tortilla chips provide a control of processing effects while fried tortilla chips reflect added changes from oxidizing lipids. Zeins and glutelins, the major proteins in the corn base, are characterized by very high hydrophobicity and by notable sulfur amino acid content that makes them particularly susceptible to disulfide crosslinking. Commercial tortilla chips from the same manufacturer were purchased from a local grocery store and incubated at 40°C and 60°C for up to eight weeks. Proteins were then extracted with and without reducing agents and analyzed for change by chemical analyses, antibody reactions, and polyacrylamide gel electrophoresis (PAGE).

The details of chemical changes in maize proteins are still under investigation, but current data suggest that in fried tortilla chips oxidizing lipids crosslink zeins and glutelins by reversible S–S bonds and permanent radical links to form loosely associated masses too large to enter the PAGE stacking gel but open enough for accessibility to dyes in solution. These polymeric masses are likely responsible for the observed texture hardening. Lipid radicals and/or hydroperoxides appear to be the most active inducers of crosslinking; other oxidation products may be involved in modification of amino acid side chains (Fig. 2). 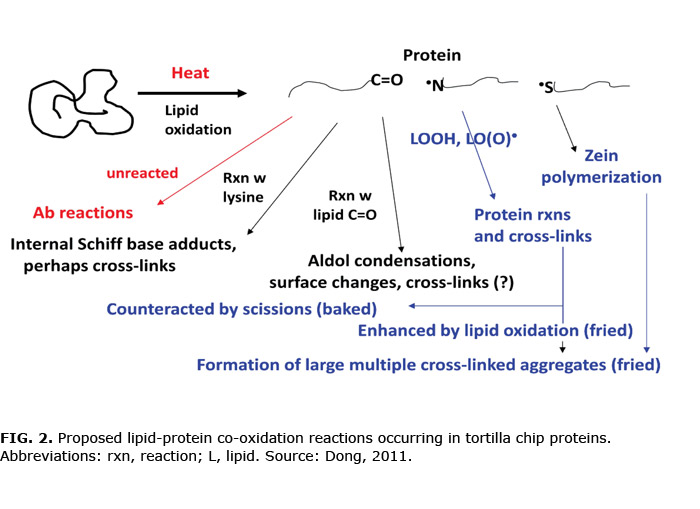 Tortilla chips have a dry, porous protein matrix with relatively low lipid concentrations. Peanut butter, in contrast, is high fat (45–50%) and has a protein matrix dispersed in a definite lipid phase. Thus, the contacts between lipid and protein in peanut butter are very different from in tortilla chips. In addition, the lipid oxidation products available for co-oxidation are likely to differ from those formed on the surface of tortilla chips, so the same damage patterns should not be expected. Most importantly, peanut proteins are unique structurally in having non-homogeneous distribution of acidic and basic amino acid residues among peptide fractions.

Co-oxidation of proteins in peanut butter

Peanut butter in military MRE (meals ready to eat) laminate packages stored at 25°, 40°, and 60°C was monitored for lipid oxidation and associated changes in protein and physical properties for up to 12 weeks. Hardness of the peanut butter increased significantly (p < 0.05) with incubation time and temperature. At the same time, the peanut butter lost its cohesiveness (did not hold together well) but became increasingly sticky, rubbery, and chewy. Moisture content did not change, so this texture deterioration most likely resulted from oxidation of lipids and proteins. The peanut butter also darkened significantly over time, particularly at 60°C.

Lipid oxidation products (conjugated dienes, hydroperoxides, carbonyls) remained low throughout the incubation and tended to decrease rather than increase over time, even while peanut butter quality was obviously deteriorating. Parallel to this, protein solubility progressively decreased and protein modification increased, providing a cogent example of how co-oxidation moves system oxidation away from lipids to other molecules.

Unexpectedly, Coomassie blue and silver staining revealed very different peptide patterns in peanut proteins, whereas they usually detect proteins identically. Since silver binds to acidic amino acids and Coomassie blue binds to basic amino acids, this differential staining indicates that binding amino acids in peanut proteins are selectively concentrated in specific peptides, rather than being generally distributed as in most proteins. This difference turns out to be important in directing co-oxidation modifications.

In marked contrast to changes in maize proteins in tortillas, peanut proteins showed little crosslinking, but there was notable fragmentation or dissociation of arachins. Rather, the dominant changes were surface modifications and reorganization of arachin and conarachin sub-units (Fig. 3). Coomassie blue dye binding decreased in all fractions. Basic protein fractions (mostly albumins) showed a progressive decrease in molecular weight, while acidic globulins rearranged, fragmented, and aggregated. Peptides from both albumins and globulins became more hydrophobic due to surface or configuration changes, decarboxylation, deamination, some aldehyde reactions,and moved to the SDS (sodium dodecyl sulfate)-soluble fraction. In fresh peanut butter, the SDS-soluble fraction had little material, but by the end of incubation, this was the dominant fraction containing a large proportion of the modified peptides (Fig. 3).

Surface modifications resulted primarily from extensive protein oxidation, especially in the SDS-soluble fraction, along with low levels of carbonyl–amine reactions (Schiff base or Michael addition) and some decarboxylation of acidic residues. Protein modifications followed the same cycling pattern as lipid oxidation, suggesting that lipid oxidation products did not accumulate because lipid radicals, hydroperoxides, and to a lesser extent aldehydes reacted preferentially with proteins, broadcasting oxidation to these non-lipid molecules. Hardening of the peanut butter appears to be directly related to surface modifications and structural reorganization of the proteins mediated by oxidized lipids. 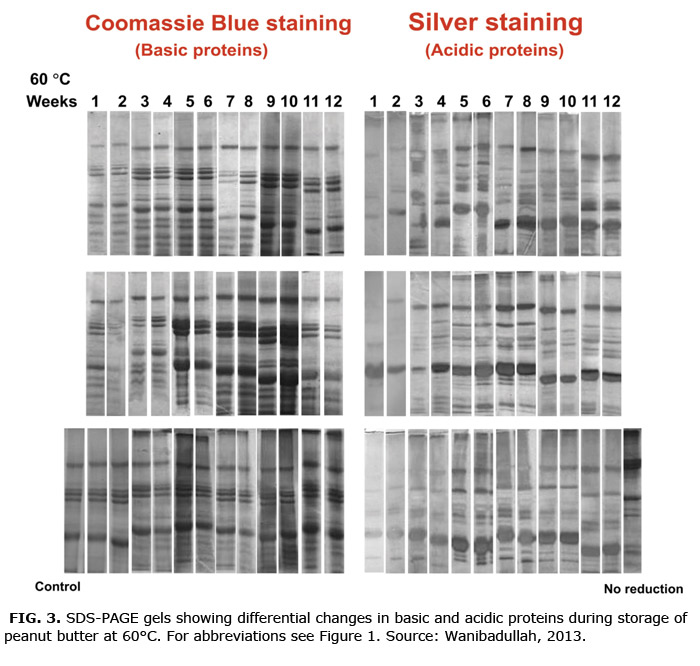 Both of these studies established a direct correlation between lipid oxidation and protein degradation and demonstrated quite clearly how measuring only lipid oxidation can grossly underestimate oxidation in complex systems. Evidence suggests that lipid free radicals and hydroperoxides are the most active species damaging proteins during the first few months of shelf life in foods, but the results in the tortilla chips and peanut butter are quite different—peptide crosslinking leading to very large molecular complexes of maize proteins in dry fried tortilla chips vs. marked surface modifications, structural reorganization and disassociation of protein subunits, and protein fragmentation in the emulsions of peanut butter. In both cases, a major consequence of protein co-oxidation was deterioration of food textures, though certainly not by the same mechanisms. Results demonstrate clearly that “one size does not fit all” in protein co-oxidations and that measuring protein changes along with lipid oxidation is critical for accurately assessing the extent of oxidative deterioration in foods.

K.M. Schaich is an associate professor in the Department of Food Science at Rutgers University in New Jersey, USA. She can be contacted at schaich@AESOP.Rutgers.edu.

Want more on this topic?

Author Karen Schaich also contributed two chapters in the AOCS Press title, Lipid Oxidation: Challenges in Food Systems. Learn more about this title by reading the book review by Laurence Eyres, a consultant with Food Inc. in Aukland, New Zealand, available via this issue’s supplement (digital and mobile editions only).