High-oleic canola oils are among the major healthful oils replacing trans fat in food processing and foodservices in North America. Through breeding, levels of linolenic and linoleic acids can be selectively reduced to increase oil oxidative stability and deliver preferred sensory profiles. A desirable frying oil, for instance, should be low in linolenic acid and adequate in linoleic acid for high stability and high intensity of fried flavors. A desirable ingredient oil, however, should be low in both linolenic and linoleic acids to prevent rancidity in storage, resulting in shelf-stable food products. The newest generation of high-oleic canola oil contains as much as 80% oleic acid and delivers the highest oxidative stability and lowest saturated fat content on the market. Its extraordinarily high stability can maintain preferred flavors in storage, extend shelf life, reduce packaging, and enable new applications.

Canola is rapeseed that was bred by Canadian scientists in the 1950s to reduce the plant’s erucic acid content. Since then, its oil has been mainly used for cooking, sautéing, and saucing. With 7–10% linolenic acid, canola oil is not stable enough for commercial frying and manufacturing of shelf-stable food. Instead, partially hydrogenated soybean oil had been the preferred working oil for many decades owing to its high stability contributed mainly by trans fat. During the past two decades, concerns about the health implications of trans fat and the need to improve the oxidative stability of commodity oils prompted industry, government, and research institutions to develop oils having naturally high stability. Because linolenic and linoleic acids are higher in oxidation rate than oleic acid, research and development have focused on reducing the level of the former through plant breeding or bioengineering. The reduction of polyunsaturated fatty acid content in plants has been scientifically managed to increase oleic acid accordingly to produce high-oleic oils. Oxidation of linolenic acid produces off-flavors in foods to which humans are sensitive. These have been described as painty, grassy, and fishy. Similarly, oxidation of linoleic acid at high concentrations produces beany and rancid odors. Within a certain range, however, linoleic acid enables high-quality frying with desirable fried food flavors.

After decades of efforts, the edible oil industry has commercialized high-oleic sunflower, high-oleic canola, and high-oleic safflower oils and is now testing two different high-oleic soybean oils. Nevertheless, high-oleic canola is the most widely used high-stability oil and dominates the high-oleic oil market due to its clean flavor, lowest saturated fat content, sustainable supply chain, and large crop production scale in North America. With implementation of a regulatory requirement for labeling trans fat on packaged foods in the United States in 2006, the demand for high-oleic canola oils has been steadily growing and is expected to reach 1.3 billion pounds (590,000 metric tons) in 2012. 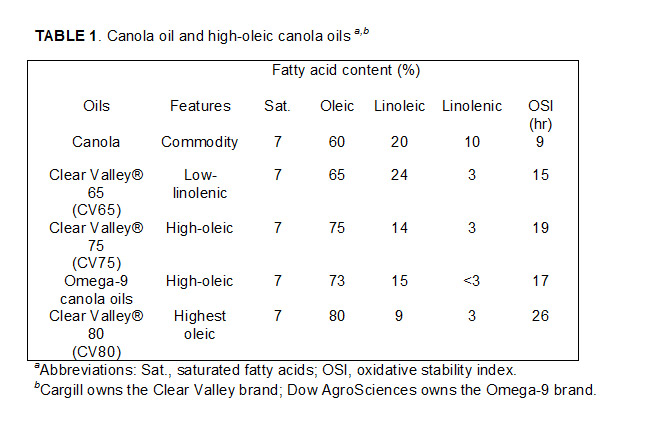 As shown, reduction of linolenic acid alone, from 10% in canola oil to 3% in Clear Valley® 65 (CV65), results in a significant increase of OSI from 9 to 15 hours. It is interesting to note that linoleic acid increases from 20 to 24% at the same time. The reduction in linolenic acid improves oil stability while the increased level of linoleic acid provides for an ideal frying oil. A series of studies conducted in the US Department of Agriculture laboratory in Peoria, Illinois, by Warner et al. (1997) showed that high-oleic oils with ideal linoleic acid range—that is, 23 to 37%--produced better flavor stability than those oils with either higher or lower levels of linoleic acid. Further reduction in linoleic acid through breeding can increase oleic acid effectively to over 70% and reduce linoleic acid to below 20%. As shown in Table 1, CV75 and Omega-9 contain about 75% oleic and can have OSI values of 17–19 hours. Clear Valley® 80 (CV80) is the highest in oleic acid and can have OSI values up to 26 hours. High-oleic oils with less than 20% linoleic acid are typically not recommend for frying because of their bland taste and flavor. They are better suited as ingredient oils for manufacturing shelf-stable foods for high stability. 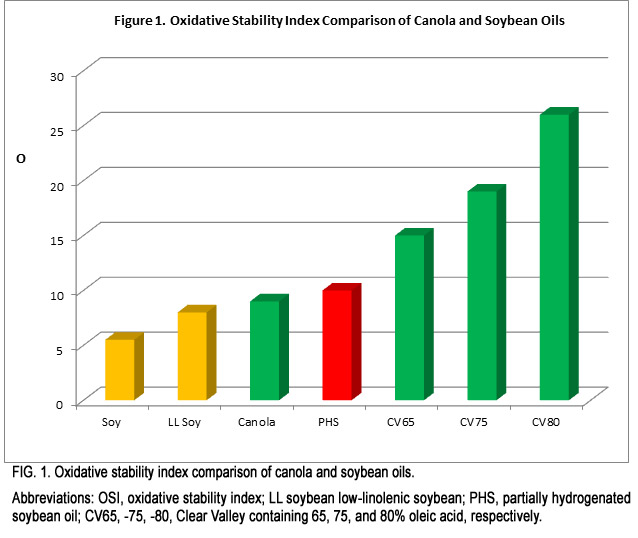 PHS has an OSI value of 10 hours, which is the minimum requirement for flavor stability in frying and food manufacturing. As shown, all high-oleic canola oils have OSI values greater than 10 hours and are able to replace trans fat in those food applications. In comparison, soybean, canola, and low-linolenic soybean (LL Soy) oils have relatively lower OSI values than PHS and have more limited market acceptance as trans replacements. While OSI is a common stability measure, the true test of stability is obtained from sensory analysis of the food products. 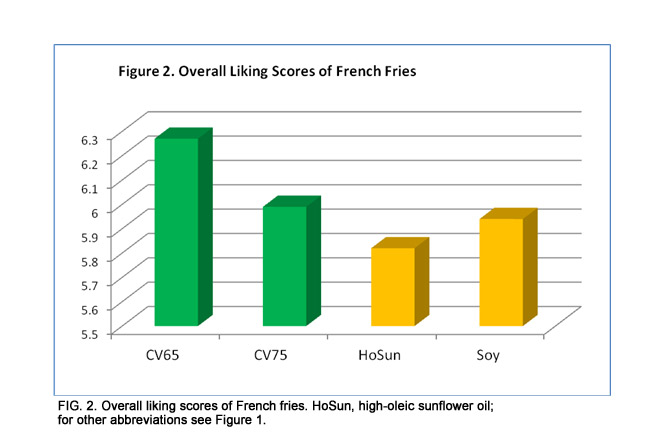 The OSI of high-oleic canola oils is linearly correlated with the oleic acid content as shown by Figure 3. 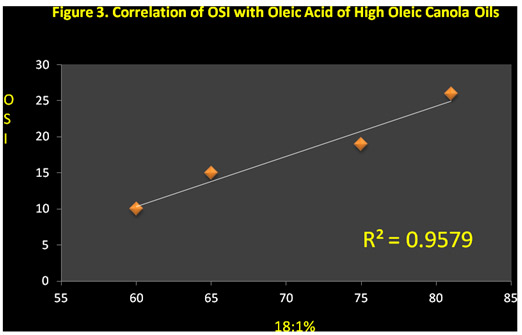 CV80, having the highest oleic acid content, is particularly useful for shelf-stable product formulation to deliver long shelf life, and it enables packaging cost reduction. Figure 4 shows the results from a shelf-life study for cereals containing CV80 and soybean oil packed in high- or low-oxygen barrier bags. Cereals were aged at 60°C for 12 days and their oils were extracted for peroxide value (PV) analysis. It is clear that soybean oil has no stability in either high- or low-oxygen barrier bags although the high-oxygen barrier may delay oxidation initially. In contrast, CV80 had almost no PV increase in 12 days of aging at 60°C under both packaging materials, which demonstrated its robust stability. This result suggests that CV80 may reduce packaging cost while providing flavor stability and long product shelf life.

Like other trait-enhanced products, high-oleic canola oils are specialty agricultural products produced under identity preservation. For that reason, large customers of high-oleic canola oils have to contract crop production for reliable oil supply. Therefore, suppliers must be carefully screened for their capabilities in managing risk, controlling the supply chain, and ensuring quality and consistency. Cargill has a fully integrated closed loop production system, from trait development and plant breeding through to oil production and formulation technology, to ensure product quality and supply. High-oleic canola oil can be further formulated into reduced saturate shortenings, extending the applications in broad food formulation such as bakery goods where extended shelf life is desired.

High-oleic canola oils are being widely used in North America to replace trans fat in frying and food manufacturing mainly due to their functionalities and supply scale. CV65 is optimal for frying owing to its low linolenic acid content for oxidative stability and to its ideal linoleic acid level for fried flavor. Actually, CV65 has been the dominant high-oleic canola oil in foodservice for the past 20 years. CV80 is typically used as an ingredient oil for shelf-stable food formulation, and its highest oxidative stability can potentially reduce packaging cost for the food industry. Table 3 summarizes features and preferred applications of canola and high-oleic canola oils.

Linsen Liu received his Ph.D. in food science and technology from Iowa State University (Ames, USA), and a B.S. in engineering in oil processing and engineering and an M.S. in lipid chemistry from Zhengzhou Grain College (now the Zhengzhou Institute of Technology, China). He has worked extensively in food oil industries and academics both in China and the United States. He currently is a technical manager at Cargill in Fort Collins, Colorado, USA. He may be contacted at linsen_liu@cargill.com.

Diliara Iassonova received her Ph.D. and M.S. in food science and technology from Iowa State University and a medical degree in pediatrics from Kazan State Medical UniversityKFC switches to high-oleic canola oil in Australia

The fast-food chain Kentucky Fried Chicken (KFC) announced in May 2012 that its Australian restaurants had switched from imported palm oil to high-oleic canola oil. KFC tested the high-oleic canola oil, which is entirely sourced from Australian farmers, for almost two years in its Tasmanian stores before making the switch. The company has since partnered with reputable canola suppliers such as Cargill, Integro Foods, and MSM Milling to supply the oil nationally.