Cannabis testing: a review of the current landscape

In 1996, the legalization of Cannabis sativa for medical use in the state of California (USA) initiated what has become an ever-growing need for testing of the plant for potency concentration as well as for contaminants such as pesticides and microbiologicals. Since then, 20 states in the United States as well as the District of Columbia have added legislation allowing for the medicinal use of cannabis, and Colorado and Washington became the first two states to legalize the use of cannabis for adults 21 and over. Worldwide, Uruguay is the only country with legalized sale and production of cannabis. The Netherlands allows for its use by residents, and Portugal has decriminalized all drugs (further information). Of these locations, only the states of Colorado, Washington, Illinois, Massachusetts, Connecticut, and Oregon require testing.

The rules for testing currently vary from state to state, but as time goes by and more states begin to add legislation allowing for medicinal and adult use of cannabis, the need for reliable and accurate analytical results from laboratories will become increasingly apparent to those outside of the testing world. While certain portions of each state’s testing requirements may align with those of other states, they vary considerably in other areas. For example, both Colorado and Connecticut require testing for heavy metals, with considerably different limits, while Illinois requires no testing for heavy metals. However, all six US states that have legalized cannabis for medical use require some combination of microbiological, mycotoxin, residual solvent, pesticide, and heavy metals testing.

The need for consistent legislation regarding uniform testing methodologies and acceptable contamination limits becomes higher with each state that passes laws allowing for cannabis use. There is also the need for a governing body to oversee laboratory operations and ensure that such operations are conducted within defined specifications.

When US cannabis testing laboratories first began opening, they operated under what they considered to be best practices—whether those be guidelines issued by the Food and Drug Administration, the Environmental Protection Agency (EPA), or some other regulatory body. To date there is no single entity that oversees laboratory operations from state to state; it is still up to states to decide what testing should be done, and it is up to the laboratories to determine what methods should be used for testing.

Most laboratories only offered potency testing at first, as people were seemingly interested only in knowing how strong their cannabis plants were. They routinely discarded plants that were not high in tetrahydrocannabinolic acid (THCA), the precursor to the psychoactive Δ9-tetrahydrocannabinol (THC), though we now know that a number of these plants contain other medicinally beneficial cannabinoids such as cannabidiol (CBD), which has been found to aid in the reduction of seizures.

The other drawback to using GC is that decarboxylation efficiency at the injection port varies from instrument to instrument. Published methods that show validation of a GC method are scarce, and even the United Nations and the American Herbal Products Association (www.AHPA.org) have declared HPLC to be the preferred method of analysis for quantitatively determining cannabinoid concentration.

HPLC methods are also quite variable, though results should be comparable between them. Methods range from under 5 minutes to over 40 minutes and from three cannabinoids to over 10 cannabinoids. Because of the inability to ship cannabis samples across state lines, laboratories are prevented from conducting ring tests and verifying to outside agencies that their methodologies and continuing operations are on par with laboratories in other industries.

Some of these variables do not plague other laboratory tests. Pesticides have been quantified by various laboratories for quite some time, and routine methods of extraction and analysis have been developed and published by several different groups. This is the same with heavy metals and microbiological testing. The EPA and United States Pharmacopeia have indicated their preferred methods of analysis for heavy metals and microbiological testing, respectively.

Laboratories often get questioned by clients about why their results are different from lab to lab, when they submitted a sample from the same plant (Fig. 1). The most common answer is that each laboratory was analyzing the sample using a different method. Without properly validated methods, laboratory certification programs, and the ability to ship ring test samples across state lines, laboratories will continually need to defend their methods to the public. 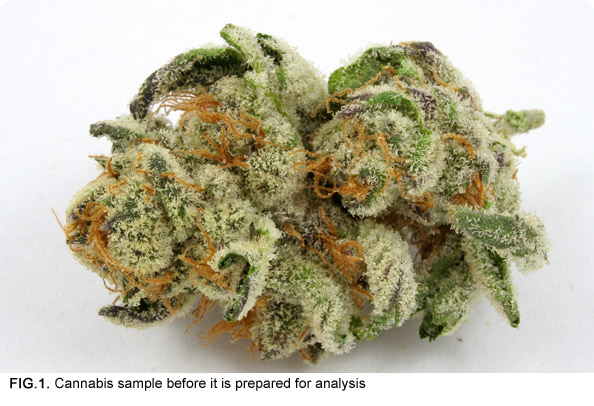 One of the main issues for cannabis-testing laboratories is the inclusion of several cannabinoid standards on the US Drug Enforcement Agency’s (DEA) Schedule I list of drugs. In order to purchase these standards laboratories must be licensed by the DEA; however, cannabis laboratories cannot become licensed because cannabis is still federally illegal and are therefore operating in direct violation of federal law. Standards that are available are not provided in concentrations higher than 1mg/mL. Without high-quality reference standards, developing methods that will be able to detect and quantify each component being sought is challenging. Laboratories have taken to making their own standards, when necessary, due to this lack of availability.

As more analytical labs open and put pressure on manufacturers of cannabinoid standards, more will become available. Historically, cannabidiolic acid (CBDA) has not been available as a reference standard; however, each lab testing in a state with mandatory testing is required to quantify this cannabinoid. Owing to demand by laboratories, though, this standard will be available shortly.

Because US laboratories cannot receive standards at concentrations higher than 1 mg/mL, the ability to validate extraction methods can become quite costly. A typical extraction of marijuana-infused food products involves approximately 1 g of edible sample and 10 mL of solvent. This requires 10 mg of a cannabinoid standard per sample validated at the upper calibration limit. Validation guidelines call for multiple samples to be extracted over the course of multiple days, which leads to a seemingly excessive cost for what is a fairly standard test. Laboratories that have validated a method for the extraction and quantification of concentrates tend then to use those highly concentrated samples as their stock standards for validating edibles at higher concentrations.

Overall, testing of cannabis and the operation of cannabis testing laboratories are heading in the right direction. States and countries that are adding usage laws are also adding testing laws. The rules around testing are becoming more consistent, and the methods that laboratories are using to do the testing are becoming more uniform. The proposed reduced scheduling of cannabis, from Schedule I to Schedule II, would greatly enhance the ability of laboratories to validate methods in an efficient manner. Federal oversight may help unify the laws across all states so that consistent testing standards are applied to all those producing in this industry and those testing in the industry.

Heather Despres is the laboratory director at CannLabs, Denver, Colorado, USA, a full-service testing lab for medical and non-medical-grade cannabis products. As the previous lab director for both Full Spectrum Laboratories and Irish Canadian Bioresearch, Despres has worked on building laboratories from the ground up, implementing policies for method validation and sample chain of custody, and ensuring that all results received by clients are accurate to the highest degree possible. Most recently, she has been a part of working groups held by the State Licensing Authority of the Marijuana Enforcement Division. She has been involved in the Labeling, Packing, Product Safety, and Marketing working group as well as the Random Testing and Mandatory Sampling working group. She can be contacted at heather@cannlabs.com.

Analyzing extracts in marijuana-infused products
Manufacturers of marijuana-infused products tend to extract the cannabinoids into products such as butter and cooking oil because of the lipophilic nature of the cannabinoids. Other methods of extraction involve the use of solvents such as CO2 or ethanol. For children, these are the safest forms of extracts, as other methods of extraction involve solvents such as butane and naphtha.

Analyzing these extracts presents some challenges in the laboratory, as the nature of the matrices can cause interference in instrumental analyses. While the lower limit of detection for typical flower and concentrate extracts is 0.01mg/mL, this is increased to 0.1 mg/mL for many edible products. Some sample types—including butter, coconut oil, honey, glycerin, chocolate, cookies, and caramel—need additional processing to remove any particulates that may form, especially in sample chambers that are refrigerated. This can involve additional solvent extractions or extra steps such as refrigerating the samples before they are filtered.

Medical marijuana for children
There are US families with children having seizure disorders who are relocating to states that allow for the medicinal use of marijuana to get access to it. Drug delivery to children with these disorders ranges from using eyedroppers to finding ways to get extracts down feeding tubes without having the lipophilic cannabinoids stick to the tubing.

The easiest way for parents to deliver this medicine is through the use of food products. Typical extractions for food products involve decarboxylating the flower beforehand and then extracting, generally via heating at low temperatures, into butter or cooking oils such as coconut oil. These are then tested for concentration and used in making other foods such as cookies or brownies, that are dosed specifically to meet the child’s needs.

Marijuana and food safety: a gray area
In the United States, food safety is generally governed by federal law, federal agencies, and federal funding. While a significant portion of state-legal medical marijuana is consumed as food, marijuana is still a federally illegal substance, which begs the question: Will such foods be covered under the US Food and Drug Administration’s Food Safety Modernization Act?

On August 29, 2013, US Deputy Attorney General James Cole issued a memorandum stating the US Department of Justice’s intention to step back and let the states take control of marijuana enforcement. However, the memo did not list food safety as a priority for marijuana enforcement. The interesting question is whether states are equipped to regulate food safety on their own. Read more.

Previously, more than 4,000 growers were licensed to produce medical marijuana for a maximum of two patients each. Under the new free-market system, private-dwelling production is banned, and imports are allowed. The government projects that the free market industry for medical marijuana will be worth $1.3 billion a year by 2024.