A customized approach to frying oil

By Michelle Peitz and Risha Bond

Usually frying is not considered an application for which algal oils are suitable. Often algal oils contain highly unsaturated fatty acids, such as docosahexaenoic acid (DHA) or eicosapentaenoic acid (EPA), that have poor heat stability due to oxidative sensitivity. Today algal oils are being developed using technology that allows specific fatty acid profiles to be targeted, thereby producing a wide array of functionalities. For instance, this technology can produce a monounsaturates-rich oil with very low polyunsaturates, opening the door to frying in algal oil.

In November 2012, ADM and Solazyme announced in a press release their entry into a collaboration to develop markets for algal food oils.

As part of this effort, algal oils with varied fatty acid profiles were examined in a laboratory frying study to explore the impact of fatty acid content on functionality. Algal oils with varied fatty acid profiles, used in the frying, were generated by Solazyme, Inc. with the company’s biotechnology platform, which uses heterotrophic microalgae to convert sugars into a wide range of customized triglycerides and bioproducts.

Solazyme is able to carefully control the environment of the microalgae inside large fermentation vessels, as opposed to pond-grown algae. Using large-scale indoor fermenters removes constraints of both seasonality and regional variability from oil production. The algal oils are produced very efficiently by the microalgae, with much more rapid growth cycles than traditional oil crops (days vs. months).

Solazyme’s technology enables production of oils that can mimic the oleic acid contents of high-stability vegetable oils, as exemplified by the “high-oleic algal oil” used in this fry study (80% oleic acid, see Fig. 1). It can also produce an oil with significant solids at low temperatures, suitable for par-frying applications, as seen in the “mid-oleic algal oil” examined (58% oleic acid/28% palmitic acid). Another profile the technology can offer is a high-oleic oil with an almost-zero content of the polyunsaturated fatty acids (PUFA) linoleic acid and linolenic acid 86% oleic acid/<0.1% PUFA). Such a fatty acid profile is not seen in today’s bioengineered oilseed crops and is only obtainable through Solazyme’s technology. This unique “high-stability algal oil” was also used in this laboratory frying study, with unprecedented results. 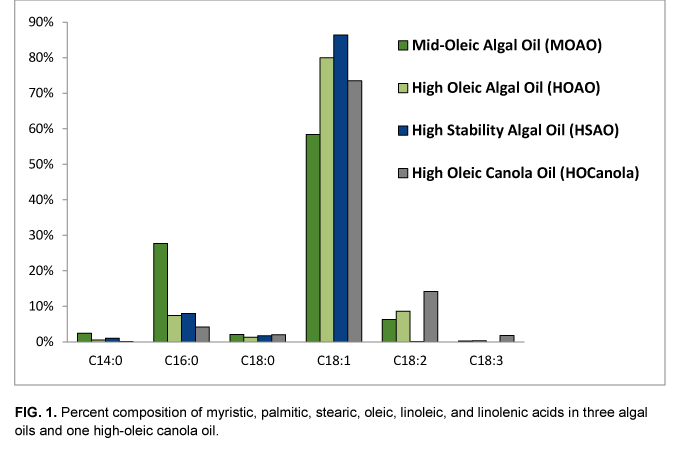 The three algal oils—mid-oleic algal oil (MOAO), high-oleic algal oil (HOAO), and high-stability algal oil (HSAO)—were evaluated alongside a high-oleic/low-linolenic canola oil (HOCanola) in a controlled laboratory setting. The HOCanola was used as an example of a commercial high-stability frying medium used in industry. All oils were refined, bleached and deodorized; and their initial quality was reflective of fresh oil. A standard bench-top laboratory frying protocol was used to stress the oil at frying temperatures for 80 hours in total over a 10-day period. During this time, a total of 46 kg of blanched, frozen potatoes were fried per fryer in even apportionments. The laboratory trial evaluated all normal frying reactions: hydrolysis, oxidation, and polymerization.

This study examined the oils “as is,” with no antifoam or added antioxidants. Initial oxidative stability index (OSI) values of fresh oil were 33.9 hours, 17.7 hours, 62.7 hours, and 18.4 hours at 110°C for MOAO, HOAO, HSAO, and HOCanola respectively (Fig. 2).As expected, after 10 days of frying, all oils, except for the HSAO, had less than 6 hours of inherent stability remaining by OSI measure. The HSAO at 10 days, with no additional protection, still had a 25 hour OSI value at 110°C. OSI is just one of the measurements that showed the impact of such low levels of PUFA in the HSAO frying oil. Another oxidation measurement that was performed was p-anisidine value (p-AV). Whereas OSI determinations survey inherent stability, p-AV measures secondary oxidation breakdown components. Increases in p-AV are expected in frying operations, with oil composition, product being fried, and frying procedures having an impact on how much the p-AV increases over time. When the p-AV for HSAO was measured at day 10 of frying, the value was 23. For comparison, the other algal oils were four times higher than the HSAO and the HOCanola was six times higher in p-AV, all treated under the same frying operations (Fig. 3). 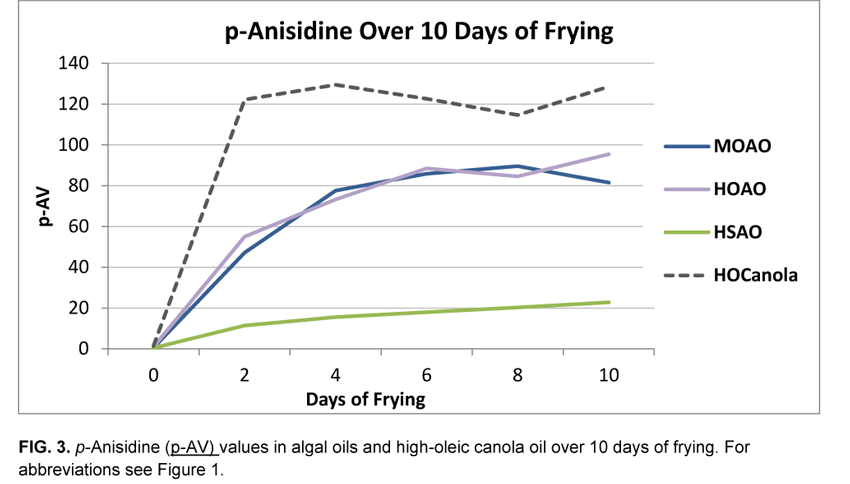 Determination of percent total polar materials (%TPM) also showed the HSAO to have fewer breakdown components, another indication of a longer fry life vs. the oils with more polar materials. After 10 days, the %TPM for HSAO was 15%, compared to the other oils that ended the study at 38–42%TPM. During the study all oils except the HSAO foamed after 3–4 days of frying—by day 10 substantial foaming was observed. This is a normal result of frying in oils with no antifoam additive and substantial levels of breakdown components, and it is remarkable that HSAO did not show foaming under these conditions (Fig. 4). Nonetheless, even with the degree of foaming observed and the high levels of breakdown components in MOAO, HOAO, and HOCanola, no polymerized oil built up on the fryers for any of the oils tested. This preliminary examination demonstrates that algal oils do show great promise as frying oils—and one, HSAO, gives outstanding results even as a neat oil. 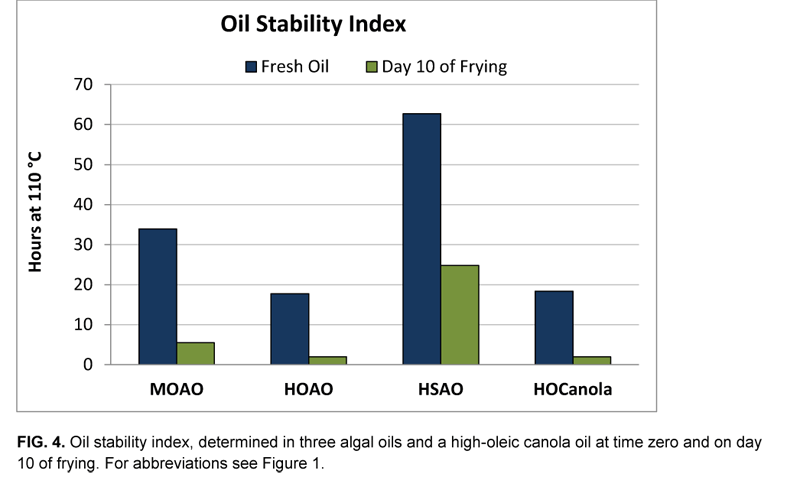 An additional aspect of the laboratory frying study was examination of the fried potatoes for flavor. The objective was to gain a basic understanding of what differences might exist. A panel of evaluators familiar with oil sensory characteristics tasted hot, fried potatoes throughout the 10-day period of frying. Samples were presented in blind, random order, although the panel members were aware of the oils used in the study. Feedback was that the algal oils did not have a consistent differentiation from the vegetable oil control. Development of fried flavor and inherent flavors was shown to vary at different time points, as would be expected with dissimilarities in fatty acid profiles. However, in this preliminary examination, sensory differences observed were not thought to be any more significant than what is detected with inherent differences seen in oilseeds.

Frying in algal oil may seem to be a novel concept, but with new developments in technology, algal oils have been customized to provide properties having parity or enhanced performance compared to a commercial high-oleic vegetable oil. The full potential is being determined as research continues. With Solazyme’s Tailored™ technology permitting custom profiling to application needs, one can ask: What would be an ideal fatty acid profile for an oil specifically designed for frying flavor and stability? What are the opportunities for extending shelf life in finished goods when polyunsaturates can be lowered to trace amounts? Is there a prospect to remove waste oil from a frying operation entirely? With these possibilities on the horizon, the future is exciting for custom profile algal oils.

Michelle Peitz works in technical sales at ADM Oils in Decatur, Illinois, USA. She can be contacted at Michelle.Peitz@ADM.com. Risha Bond is associate director, emerging business at Solazyme Inc., South San Francisco, California, USA. She can be reached at rbond@solazyme.com.