Arrested coalescence occurs when fat globules come into contact with one another, begin to combine, but halt this fusion before total coalescence occurs. This phenomenon is controlled by two opposing forces: the Laplace driving force to minimize total interfacial area and an elastic resistance that opposes deformation of the internal solid network. When interfacial forces dominate, it is favorable for two droplets to combine into one larger, spherical droplet, reducing the total interfacial free energy and resulting in full coalescence. Conversely, when a strong rheological resistance exists, such as the presence of a rigid internal solid fat network, or particles occupying the surface of fat globules (Pickering emulsions), the droplets may not coalesce at all. Arrested coalescence is seen when these two forces are nearly in balance, leading to unique anisotropic structures like those in video 1. This confocal image scans through a doublet found within an emulsion. The dark lances are solid fat crystals, which form a network within the droplets. The transmission electron micrograph shown in Figure 1a also captures crystalline fat entrapped within oil droplets in an ice cream sample. This solid matrix eventually arrests the structure, as it is energetically unfavorable to further compress or readjust the network, creating fat globule clusters as seen in Figure 1b. 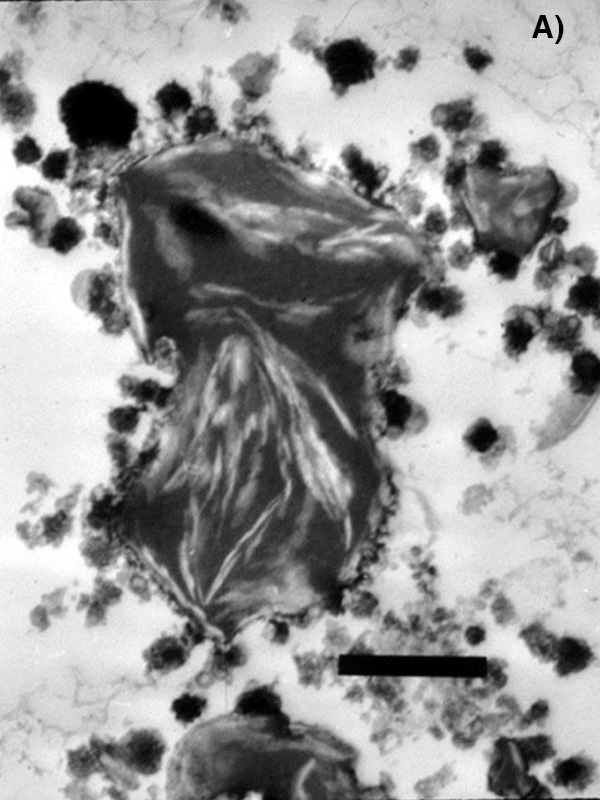 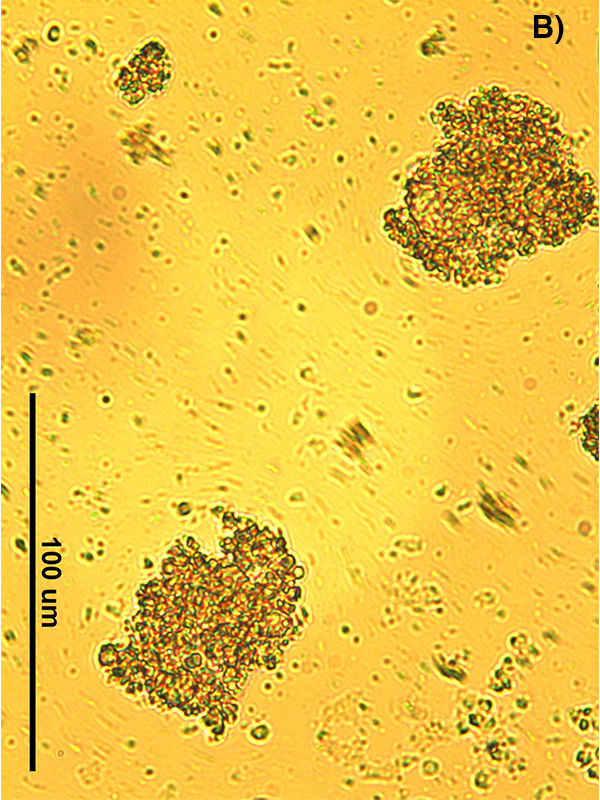 The occurrence of partially-coalesced fat networks is critical to the stand-up properties of whipped toppings, but it can also stabilize air cells and prevent rapid melt-down in ice cream. Figure 2 shows two ice cream samples dispersed on a microscope slide, one with almost no partially-coalesced networks (left-hand side or video 2) and the other with a high amount of fat destabilization (right-hand side or video 3), both melting at room temperature. On the left, most of the fat globules are single and free flowing, and the two labeled A and B, can be seen moving. Conversely, on the right, partially-coalesced networks, marked as PC, are able to hold the air cells in place and stabilize the microstructure, as the ice cream melts over time. The ability of emulsion droplets to destabilize can be influenced by the type of fat, solid fat content, emulsifier, and co-surfactant used in the product, as well as, processing parameters like shear forces and temperature. 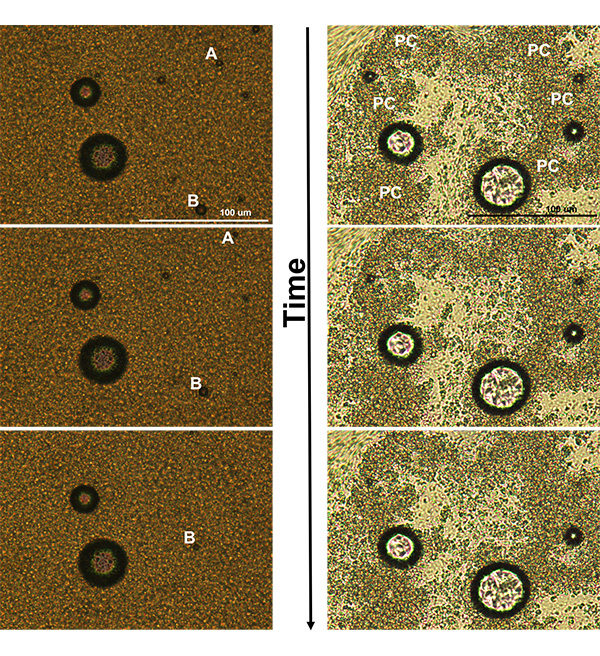 FIG. 2. (Left) Ice cream sample with very little partially coalesced structure. Over time the free fat globules move as the ice cream melts, dragging the air cells with them. Two air cells are marked A and B to easily visualize the flow seen in this ice cream. By the third image, enough time has passed that air cell A has moved off the screen. (Right) Ice cream with a large amount of partially-coalesced fat networks, marked as PC, that maintain structural integrity even as the ice cream melts. The lighter areas contain free fat globules that are flowing as the sample melts.

The most prevalent theory regarding arrested coalescence, described by Walstra in his book, Physical Chemistry of Foods, maintains that interfacial crystals protruding from fat globules are responsible for penetrating into neighboring droplets, initiating oil neck formation, and therefore promoting coalescence. This theory was not based on direct observation of such an event, but rather, experiments where the degree of destabilization within an emulsion appeared to correlate with the amount of interfacial crystals observed. Coalescence is also widely known to occur in emulsion droplets containing no solid particles, so the real explanation is likely some combination of phenomena.

Although Walstra’s theory of arrested coalescence is widely cited, the lack of understanding surrounding the detailed mechanism of partial coalescence of fat globules remained. To further explore this area, a technique known as micromanipulation, used to precisely move microscopic objects during medical procedures like in vitro fertilization, was reapplied to study droplet arrest. Here two capillary tubes, which can apply a positive or negative pressure, are used to capture fat globules within an emulsion and direct them into contact. This setup is pictured in Figure 3a, where the two micromanipulators are each loaded with one fat globule. The manipulators are then manually moved to gently touch the globules together to evaluate coalescence status while observing through a microscope.

FIG. 3. (a) Beginning point for all micromanipulation experiments. The two glass capillary tubes are used as micromanipulators and can exert a negative pressure to capture and subsequently move globules into contact. Droplets are composed of a mixture of palm oil and soybean oil. (b)End structure formed by two 3% SFC droplets achieving full coalescence. (c) Final doublet shape achieved when two 7% SFC globules are contacted. (d) A small oil neck is formed between two 11% SFC droplets. (e) At 16% SFC total stability is achieved. The two droplets preserve their own spherical shape and no coalescence is observed.

Utilizing the micromanipulation setup allows emulsions with different properties to be studied. Both Pickering emulsion droplets, where nanoparticles are contained at the interface, and partially crystalline emulsion droplets, where internal particles form a solid fat network, have been observed to undergo a wide range of coalescence behavior. In these studies, no interfacial fat crystals were observed, yet partial coalescence was achieved. Examples of the final structures created using two droplets composed of palm kernel oil and soybean oil can be seen in figure 3b-e. As the solid fat content (SFC) of the droplets is increased from 3b-e, the droplets arrest at an earlier stage of coalescence until total stability is achieved. Here structures range from full coalescence (3b) at the lowest SFC to no coalescence (3e) at the highest SFC. Figures 3c-d show structures that are partially coalesced. Further, Pawar et al. showed similarly that increasing surface coverage of nanoparticles on oil droplets also results in arrest at earlier stages of coalescence, eventually resulting in Pickering stabilization [1]. Nearly identical doublet assemblies to those in Figure 3 can also be seen by altering the surface coverage of nanoparticles situated at the interface of Pickering emulsion droplets. Note that no protruding, interfacial fat crystals are observed or needed for either Pickering emulsion droplets or partially crystalline emulsion droplets to initiate and undergo arrest.

This is not to say crystals at the interface of fat globule cannot initiate coalescence. Actually, such an event can be microscopically observed. Figure 4 shows one globule with crystals coaxed to the interface by adding a high amount of surfactant to the emulsion. The crystalline spears can be directed into the neighboring droplet and are seen to pierce through the interface. Oil begins to travel along the crystal, as if it were a bridge, merging the droplets. Therefore, crystalline fat at the interface can induce arrested coalescence, but is not a requirement. 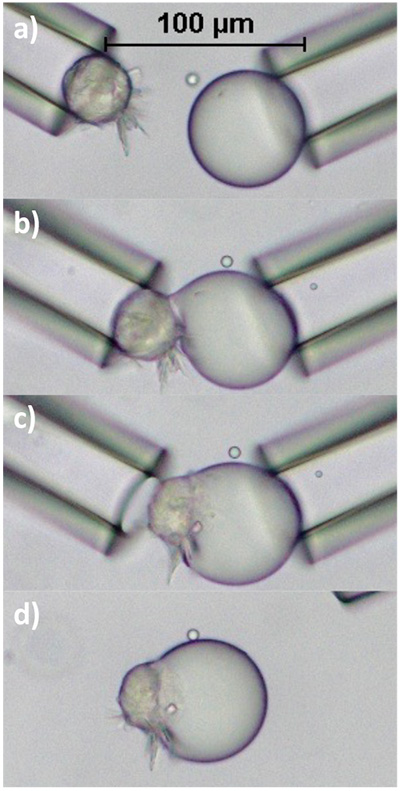 FIG. 4. (a) 100% Palm kernel oil droplet with interfacial crystals on the left manipulator and 4% SFC droplet composed of palm kernel oil and soybean oil on right the manipulator. (b) Interfacial crystals from left droplet are used to penetrate into right hand droplet. Oil begins to be shared between the two. (c) The oil being shared unites the droplets together. (d) Final structure showing the droplets arrested in a doublet configuration.
Fabricating glass capillary tubes as micromanipulators allows great flexibility for working with different-sized droplets. Droplet diameters as small as 10 µm, and up to 100 µm, have been manipulated. Experimentally, as the diameter of same-sized droplets is increased, coalescence becomes arrested at earlier stages because of a reduction in the interfacial driving force.

Moving beyond the shapes formed by two droplets, the next logical step is forming triplet structures. Here, two droplets are forced together and allowed to form a stable shape, then a third droplet is added to the existing doublet and its arrest studied. It was found that the orientation of the third droplet, relative to the first two, could change drastically from the original contact point, as the triplet underwent restructuring to lower its interfacial area. Conversely, the original positioning of the triplet can be preserved if droplets are composed of high solids. In this case, shape change would necessitate rearrangement or breakdown of the internal fat matrices, which is energetically unfavorable.

Investigating the fundamental behavior of doublets and triplets has led to numerous insights; however, in foods, partially-coalesced fat networks are likely to contain hundreds, if not thousands of individual droplets. Further studies into the mechanism of how these extensive, three-dimensional networks are created will be key to better controlling their occurrence in aerated foods. Additionally, investigating alternative shapes or assemblies of particles to achieve unique structures, as shown in Figure 5, could aid in drug delivery and provide enhanced functionality to consumer products, as these structures have higher surface area. Understanding how droplets can be used as building blocks to manipulate product microstructure will provide opportunities to optimize current food quality and to create new templates to design future food, consumer goods, and pharmaceuticals. 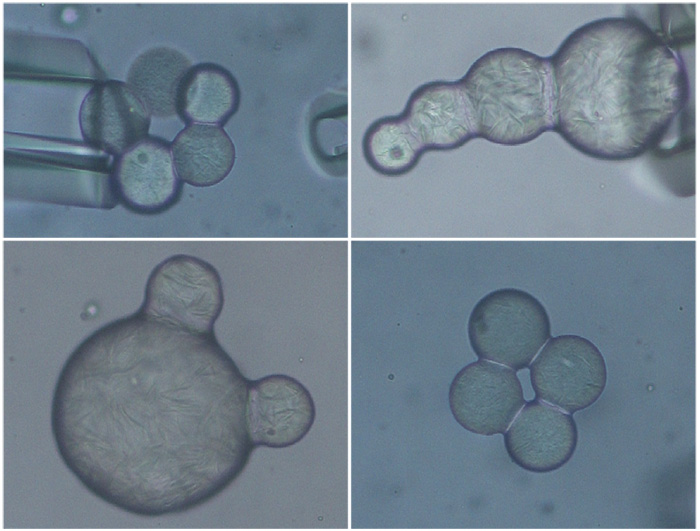 FIG. 5. Multiplets made by successively adding droplets to an existing arrested structure. Different anisotropic shapes can be attained depending on where the droplet is added.