The World Health Organization, the US Food and Drug Administration, and various health authorities throughout the world recommend a minimum consumption of about 2,100 food calories per day, as part of a nutritionally balanced diet, to ensure a healthy and active life (1). A country’s ability to produce or purchase sufficient food to effectively satisfy that nutritional dietary threshold defines, in part, a nation’s food security status. Interactive computational models such as the Global Food Security Index (GFSI) provide analytical tools for estimating the level of food security among countries or regions (2). The current index lists 28 countries in severe need of improvement, primarily in Sub-Saharan Africa (SSA) and Indonesia. The situation is endemic in SSA, which may be the most food insecure region in the world (3).

Immediate and longer-term food and nutrition security needs in SSA are being addressed on a massive scale under a comprehensive action plan developed by a “High-Level Task Force on Global Food Security” led by the United Nations (UN) Secretary-General and the Director-General of the Food and Agriculture Organization (FAO) (4). A principle tenet of the international plan recognizes the priority of investing in agricultural research “to improve the productivity of local foods so that they (the countries) are more competitive and contribute to make improvements in nutrition.” Current US Department of Agriculture-Foreign Agricultural Service (5) estimates of the market situation for food and feed crops in SSA show that cereal crops, principally corn, sorghum, and millet, dominate domestic production; rice, wheat, barley, oats, rye also contribute to the total food supply (Table 1). 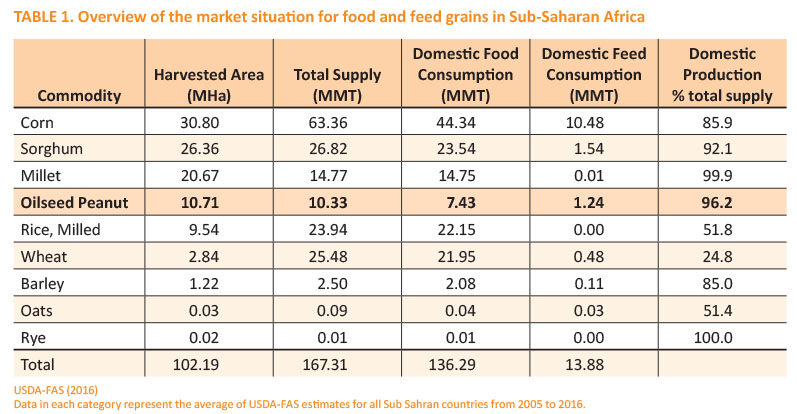 Collectively, cereal grains account for nearly 95% of domestic food consumption in SSA. Meat and poultry products are a rare dietary option in all SSA countries, with the exception of South Africa. (5). Limited sources of protein-rich foods condition symptoms of dietary protein deficiency in about 60% of Sub-Saharan Africans. Thus, the nature of local food production in SSA presents a formidable constraint on humanitarian efforts to improve human health through nutritionally balanced diets.

Estimates of the nutritional impact of peanut consumption on dietary protein quality show that SSA nations may be divided into two groups of 11 countries, where peanut accounts for greater or less than 10% of total daily caloric intake, a threshold that correlates with estimates of total peanut protein consumption (Table 3a). Within group averages weighted by country population, the group of SSA nations that consume a higher level of peanut foods per capita on a daily basis exhibit a positive total dietary protein balance; unfortunately, those countries account for only about 30% of the total SSA population (Table 3b). 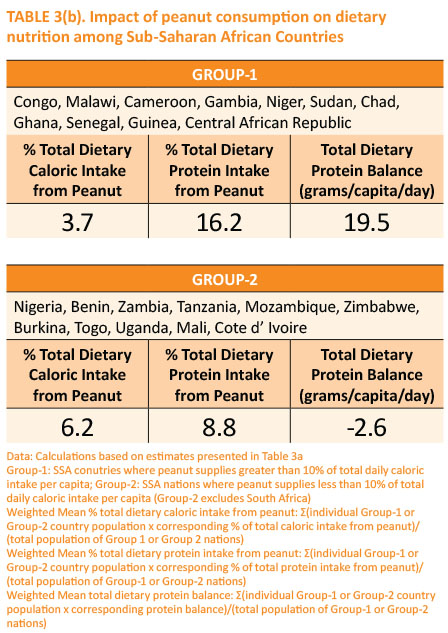 Worldwide, SSA ranks second in global oilseed peanut production, first in harvested area, and second in total demand for oilseed peanut (Table 4). What then is the major constraint on wider implementation of the UN’s endorsement of peanut consumption as a treatment for acute malnutrition in SSA? The answer appears to be the low yielding ability of peanut varieties grown in SSA. Technological advances in peanut breeding have improved average yields in the United States (4.0 MT/ha), China (3.4 MT/ha), and South America (3.1 MT/ha); however, from 2005 to 2016, peanut yields in SSA have averaged about 0.9 MT/ha. In effect, SSA produces only about 26% of world peanut production on about 45% of the global harvested area. Thus, developing the peanut as an intervention to help correct acute malnutrition predominately is constrained by an inability to implement cost-effective yield-enhancement technologies.

Fortunately, recent technological breakthroughs made by the International Peanut Genome Initiative offer an opportunity to improve the yielding ability of oilseed peanut varieties in SSA (http://PeanutBase.org). The basis for these breakthroughs (7) is embodied in the ordered chromosome scale assemblies of two wild specie progenitor genomes (Arachis duranensis, Arachis ipaensis) and the pending genome assembly of cultivated oilseed peanut (Arachis hypogaea). Visualization of annotated chromosomal structures of those genomes accelerates discovery of useful variations in disease-specific resistance genes, construction of genetic markers that pinpoint those alleles, and deployment of advanced breeding methods that mediate transfer and accumulation of disease-resistance genes in agronomic varieties of cultivated peanut. The international peanut research community has targeted a broad array of bacterial, fungal, viral, and parasitic diseases to control peanut crop damage and economic losses caused by Aspergillus flavus (aflatoxin), groundnut rosette disease, Aspergillus niger, bud necrosis collar rot, peanut rust, bacterial wilt, and late and early leaf spot (8). Genetic resistance to these diseases will provide a cost-effective means to realize future increases in oilseed peanut supply in SSA. Initial deployment of those varieties near processing plants in Nigeria, Sudan, Senegal, Tanzania, Cameroon, Ghana, and Burkina that account for about 75% of SSA crush capacity (5) also should enhance the supply of peanuts and demand for nutritious foods such as peanut butter.