The health benefits offered by long-chain omega-3 fatty acids, medium-chain triglycerides (MCT), and conjugated linoleic acids (CLA) to humans are well documented. A growing number of studies have shown that these lipids offer many of the same health benefits to their pets as well.

The long-chain omega-3 fatty acids, EPA (eicosapentaenoic acid, C20:5 n-3) and DHA (docosahexaenoic acid, C22:6 n-3) are found in oils from coldwater marine fatty fish such as tuna, sardines, and anchovies. Scientific research over the years has clearly established that EPA and DHA contribute to the normal function of the heart, while DHA contributes to maintenance of normal brain function and normal vision in humans.

Dietary supplementation with EPA and DHA provides benefits throughout a lifetime. When provided pre- and postnatally, they can accelerate the maturation of the brain and the visual system. In adults, they may protect against coronary heart disease, improve bone health, and reduce inflammatory processes, especially in rheumatoid arthritis. For the elderly, supplementation may improve cognitive function. Recent research has shown these omega-3 fatty acids provide value in the same health arenas for pets.

In 2006, work conducted by Bauer and colleagues demonstrated the positive effects on visual development of providing puppies with DHA supplementation. Zicker and coworkers published a study in 2012 investigating the effects on cognitive development of providing fish oil for the first year of a puppy’s life. Puppies were fed a control diet low in DHA or a diet with moderate or high levels of DHA. Researchers monitored a number of parameters, including the ability of the puppies to learn new tasks. In the reversal task, pups were taught to navigate a positional (T) maze to access a food reward. Then they had to learn to reverse the direction traveled through the maze to find the reward. Puppies receiving moderate and high levels of DHA were able to learn this reversal task with significantly fewer errors than puppies receiving low DHA levels. In addition, puppies on the high DHA diet were able to complete the task successfully more times in a row than dogs on the other diets (Fig. 1). 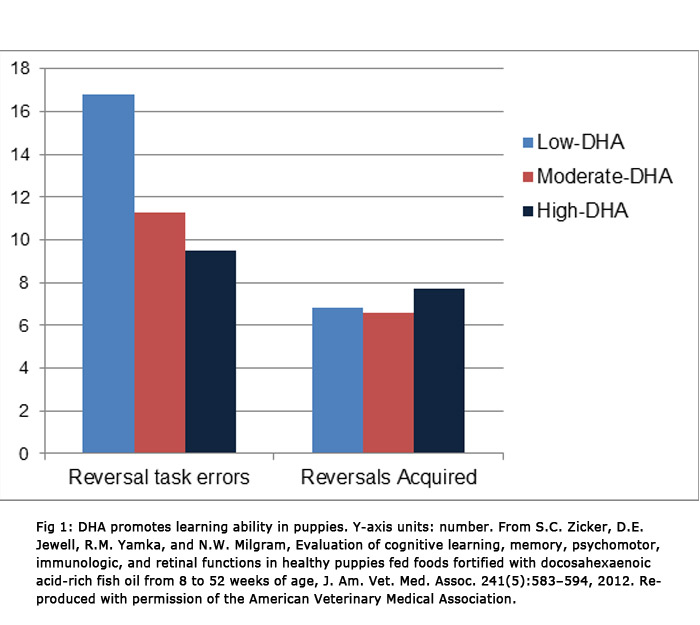 MCT have been used in human medical nutrition for more than 50 years. MCT are the C8 and C10 fatty acid esters of glycerin. In comparison, the long-chain triglycerides (LCT) in most fats and oils are primarily made up of C16 and C18 fatty acids. This difference in fatty acid chain length is responsible for the contrasts in physical and metabolic properties between LCT and MCT. MCT are absorbed more Reversal task errors.

Reversals Acquired quickly and digested more easily than LCT. Unlike LCT, MCT are hydrolyzed completely in the gut. The resulting medium-chain fatty acids are able to enter the circulatory system directly via the portal vein. From there they are transported to the liver, where they are rapidly oxidized. Therefore, MCT can provide an important source of energy, especially for patients with impaired LCT metabolism, for premature infants, and for the critically ill. The ultimate products of oxidation of MCT are the ketone bodies acetoacetate and β- hydroxybutyrate. These ketones are the only alternative source of energy for the brain. This is important in the case of starvation or in diseases involving impaired glucose metabolism, such as Alzheimer’s disease. Research has demonstrated that providing MCT to these patients can help to improve cognitive function.

Research has also shown that dogs can receive the same benefits to cognitive function. In 2010, Pan and coworkers subjected aging beagles to a battery of cognition tests to compare the effects of an MCT-supplemented diet to a control diet. In almost all test protocols, those animals receiving MCT showed significantly better performance than the control group.In addition, the more difficult the task, the more pronounced was the effect of the MCT. In one example, the dogs were taught to identify a landmark indicating a food reward. When asked to repeat this task one month later, the test group receiving MCT was able to complete the task with significantly fewer errors than the control group (Fig. 2). 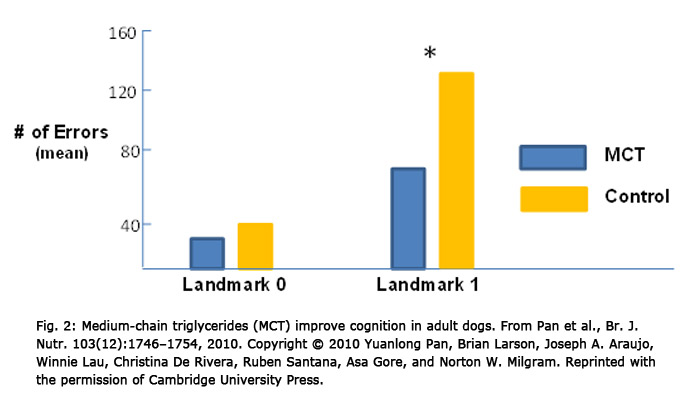 Another feature of MCT is their ability to increase energy expenditure and fat oxidation compared to consumption of LCT. This can lead to decreased body fat. In 1982, Baba and colleagues fed rats 150% of their daily caloric requirements, with 50% of calories coming from either MCT or LCT. While both groups gained weight, the MCT-fed group gained significantly less weight than the group receiving LCT.

A similar effect has been shown with dogs. In a study conducted by Miller and coworkers (2004), two sets of dogs, one obese and the other lean, were fed either a diet containing MCT or a control diet with LCT. Both groups were fed fewer calories than maintenance to ensure weight loss. Both lean and obese dogs receiving the diet lost significantly more weight than dogs on the control diet (Fig. 3). In fact, the lean dogs were losing so much weight on the MCT diet that the study had to be stopped early. 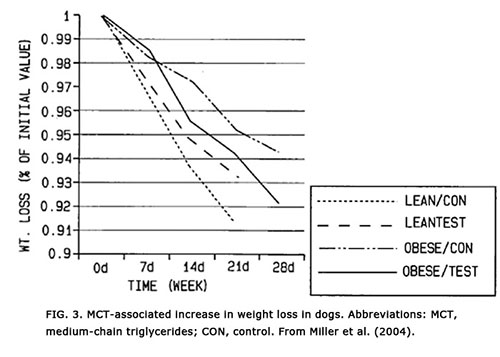 CLA were first identified by researchers (Ha et al., 1987) at the University of Wisconsin-Madison (USA) as potent anticancer agents in lab animals. Since their discovery, they have been investigated extensively, particularly for the ability of CLA to reduce fat mass, increase lean body mass, and improve fat oxidation. Research has indicated that CLA may also help to reduce inflammation, increase bone mineralization, and improve exercise endurance, all of which mimic the effects of exercise on physiology. Commercial sources of CLA are 50:50 mixtures of the two active isomers, cis-9,trans-11- and trans-10,cis-12-CLA . They are derived from linoleic acid (cis-9,cis-12 C18:2) commonly found in safflower, sunflower or soybean oils.

While humans respond quite well to CLA supplementation for body fat loss, some animals, especially mice, dogs, and pigs, respond even better, resulting in dramatic effects. Research conducted by Hargrave and coworkers (2002) showed that a 1:1 mixture of the two CLA isomers caused a significant decrease in abdominal fat in mice. This work also helped to establish that it is the trans-10, cis-12 CLA isomer that is responsible for body fat reduction (Fig. 4). 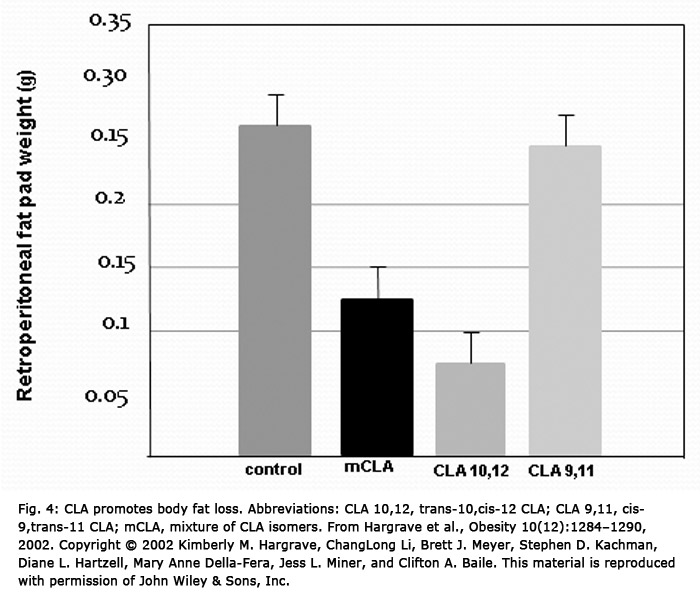 CLA’s ability to increase endurance capacity has been demonstrated in several trials. Kim and colleagues (2010) fed mice for 10 weeks on a CLA diet; the mice significantly increased their time to exhaustion on a treadmill compared to mice on the control diet. Similarly, Mizunoya and coworkers (2005) showed that mice fed a CLA diet for only one week significantly increased their time to exhaustion in swimming trials.

Ten years prior to the CLA swimming endurance trial, Fushiki and coworkers fed mice an MCT diet for six weeks and found that their swim time to exhaustion was significantly increased compared to the LCT-fed control group. This finding leads to the question, what effect would a combination of MCT and CLA have? Although few studies on the interactions of MCT and CLA have been done to date, a study by Hargrave and colleagues in 2005 showed that animals fed a combination of CLA and MCT lost significantly more body fat than animals fed on either diet alone.

While a great deal of research has been performed, ongoing work continues to demonstrate the health benefits that specialty lipids such as the omega-3 fatty acids, MCT, and CLA can provide pets, to help them lead healthier lives and bring continued joy to their owners.

Jenifer Heydinger Galante is senior research manager for Stepan Lipid Nutrition, headquartered in Maywood, New Jersey, USA. She holds a Ph.D. in Organic Chemistry from the University of Wisconsin-Madison (USA). She can be contacted at jheydinger@stepan.com.

Global pet food market to reach $75 billion by 2017 According to a market report published by Transparency Market Research, “Pet Food Market— Global Industry Size, Market Share, Trends, Analysis and Forecast, 2011–2017” (published August 2012, see http://www.transparencymarketresearch.com/pet-food-market.html), the global pet food market was worth $58.6 billion in 2011 and is expected to reach the value of $74.8 billion in 2017, growing at a compound annual growth rate (CAGR) of 4.2% from 2011 to 2017. North America is expected to remain the largest regional segment for the pet food industry in terms of revenue generation, accounting for around 40% of the total revenue. Asia Pacific will be the fastest growing segment due to a growing trend toward and increasing importance of pets in homes.

A number of official methods and recommended practices of the AOCS are available for the analysis of the fat and fatty acid content of pet food ingredients and finished products. Five of the most recently validated methods are: