Sesamol is a phenolic compound found in sesame seeds and sesame oil and is regarded as a major antioxidant component in the oil. While raw sesame seeds contain only a trace amount of sesamol, sesamol is produced from decomposition of sesamolin during the roasting process of sesame seeds (Wanasundara et al.,1998).

Sesamol has many important biological activities and health-promoting benefits such as inducing growth arrest and apoptosis in cancer and cardiovascular cells and enhancing vascular fibrinolytic capacity (Jacklin, et al., 2003). For an order quantity of 100 kg, synthesized sesamol can be purchased for $60/kg and natural sesamol for about $100/kg. Although sesamol is relatively inexpensive compared to other natural antioxidants and is well documented to have strong antioxidant activity and health benefits, it is not being used in frying oils yet. The rest of this article considers current barriers to the use of sesame oil in frying. 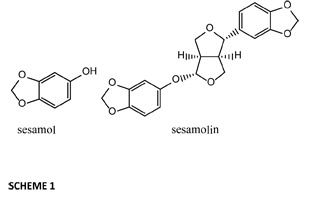 How effective is sesamol in frying?

The antioxidant activity of sesamol in frying oil was evaluated during the following situations:  frying with (i) soybean oil (SBO) containing sesame oil, (ii) sesamol in heated methyl linoleate, (iii) lignans found in sesame seed, and (iv) sesamol in a lard model system. Among 10 lignans and model compounds that we tested, sesamol was the strongest radical scavenger and the best antioxidant for heated SBO (Hwang et al., 2012). Sesamol showed about 60% higher radical scavenging ability than TBHQ (tert-butylhydroquinone), a synthetic antioxidant, toward ABTS [2,2′-azinobis-(3-ethylbenzothiazoline-6-sulfonic acid)] radical. However, the antioxidant activity of sesamol observed in frying experiments was not as good as that demonstrated in heating studies and radical scavenging ability tests. To exhibit higher activity than 200 ppm of TBHQ, a higher concentration of sesamol was required. This prompted our research group to investigate causes of the unexpectedly inferior antioxidant activity under frying conditions. 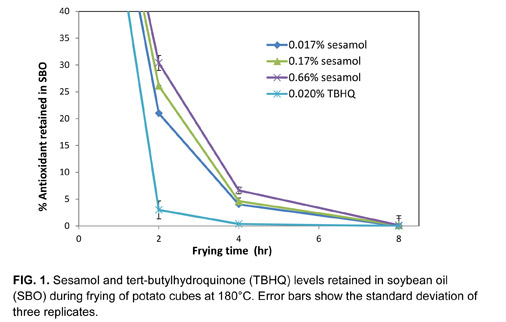 Evaporation, one possible reason for concentration decreases during frying, was examined with thermogravimetric analysis (TGA). The experiment was conducted under nitrogen to minimize oxidation/decomposition. TGA of sesamol and TB

How could the antioxidant activity be improved?

If evaporation is one of the important factors inhibiting sesamol effectiveness, finding a method to reduce volatility would be critical to using this natural antioxidant for frying oil. As one possible solution, we tested a multiple addition approach, in which the same amount of sesamol was added portion by portion throughout the frying process to keep the sesamol concentration at a certain level. The frying experiment was carried out with SBO and small cubes of potato at 180°C. Eight times every hour, 0.083% of sesamol was added was tested, and results were compared with the single addition method in which 0.66% sesamol was added at the beginning of frying. 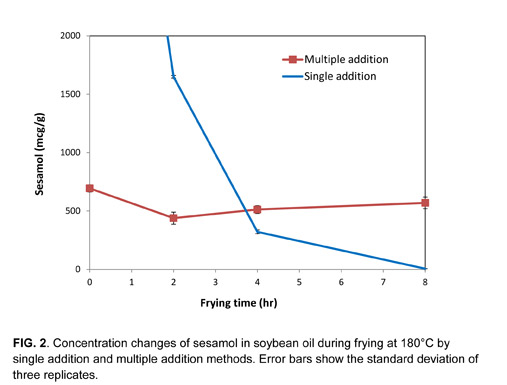 Oxidation products, determined as polymerized triacylglycerols after 2, 4, and 8 hr frying time, are shown in Figure. 3.  The same amount of sesamol added using the multiple addition method showed better antioxidation activities than the single addition method, despite the fact that overall concentration in the soybean oil was initially much lower. It is evident that the level of sesamol throughout the frying process is more important than the initial concentration of sesamol and that keeping the sesamol at a certain level is important for good antioxidant activity. 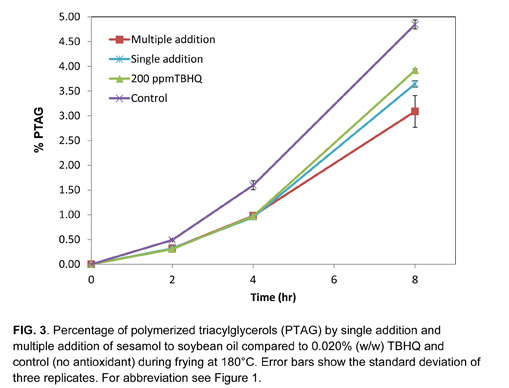 Our research group has invented another method to reduce volatility of sesamol for which we have made patent application.  We intend also to study preventing and reducing decomposition of sesamol under frying conditions.  By using several combined technologies, sesamol may be used in the frying industry as a natural antioxidant.

People have consumed sesamol for thousands of years as a natural component in sesame seeds and sesame oil. In the latter, the sesamol concentration is up to 900 ppm. Sesamol was found to be non-mutagenic by the Ames assay, but showed a positive test for mouse lymphoma cell cultures. Sesamol was positively associated with the occurrence of several types of tumors when fed to rats and mice at a level of 2% of the diet for 96–104 weeks. However, several other natural and common antioxidants such as caffeic acid and catechol were also found to be positive for tumors in these studies, and usage at such a high level of the diet is very unlikely.

The National Cancer Institute nominated sesamol for further carcinogenicity testing by the National Toxicology Program (NTP) in 1989, based on the positive test result for mouse lymphoma. However, after reviewing the available data, the NTP did not recommend any further testing.  Neither sesamol nor sesame extracts containing sesamol are listed in the US Food and Drug Administration’s (FDA’s) inventory of Generally Recognized as Safe (GRAS) substances or in the GRAS Notice Inventory. Companies that want to use sesamol or sesame extracts containing sesamol as a food ingredient would need to evaluate all of the available data and file a notice to the FDA of GRAS determination under the specific conditions of use as a food ingredient.

Hong-Sik Hwang is a research chemist at NCAUR (National Center for Agricultural Research), Agricultural Research Service (ARS), US Department of Agriculture (USDA; Peoria, Illinois). He has been with NCAUR since 2010. Prior to joining NCAUR, he worked for Indium Corporation for nine years. He received his Ph.D. in organic chemistry from Texas Tech University, Lubbock, Texas, USA, in 1996.

Jill Winkler-Moser received a Ph.D. in Food Science and Human Nutrition from the University of Illinois, Urbana-Champaign, USA. She has been a research chemist at the NCAUR, ARS, USDA since 2005, and is lead scientist of the project team that focuses on improving the stability, functionality, and healthfulness of oils. She can be reached at jill.moser@ars.usda.gov.