Editor's note: This paper is an update of a presentation delivered at the 99th AOCS Annual Meeting & Expo in Seattle, Washington, USA, May 19, 2008.

The scientific and popular press is awash in headlines and articles depicting the impending collapse of the global wild fisheries. Headlines such as "Oceans in Peril," "Ocean Life Fading, What Can Be Done?" "The Fishing Catastrophe and What We Can Do About It," "SOS for Fading Ocean Life," "Tuvalu About to Disappear into the Ocean," "SOS for Fading Ocean Life," and "Ocean Time Bomb" are just a few examples. In more recent times, attention is being paid to the pelagic fisheries with such headlines as "Eating Smelly Fish Could Save Endangered Species," "Most Fish Goes into Animal Feed," "Our Oceans Overfished to Feed Pigs," and "Pets Eating into Fish Stocks." One report has indicated that the oceans will be empty by 2048.

The common link in all these headlines is the notion that the ocean fish stocks are being depleted owing to overfishing. When the industry and responsible government entities responded, saying that the "industrial fish species" are not being overfished and are useful in feeding animals and farmed fish that are consumed in the human diet, the emphasis moved to the concept that these fish are being wasted on animals when they could be used for human consumption. The fact is that these industrial fish are classified as industrial because they are small, oily, and very bony. These characteristics make it technologically very difficult (but not impossible) to convert them to food use. It becomes an issue of economics, because once the oil and bones are removed, there is very little of the mass left.

The effect of all these headlines is to create not only misconceptions in the marketplace but also concerns among consumers about the availability of fishmeal and fish oil. Since the aquaculture market consumes a major portion of the world's production of fish oil and half of the world's production of fishmeal, their concerns are routinely addressed with industry publications and at conferences. But what about the nutraceutical or omega-3 market? Will there be enough fish oil to meet their current and future needs? The purpose of this paper is to alleviate those fears or at least put the situation into perspective.

Depending on what you wish to portray, you can run trend lines of the global wild catch and aquaculture production and have them cross anywhere from 2020 to 2040, at somewhere between 80 and 100 million metric tons (MMT). If nothing else, the data show that, by assuming trends continue as they are now, eventually the aquaculture and global landings line will cross. If we use Figure 1 as one extreme (the trends never cross), then Figure 2 is the opposite extreme. 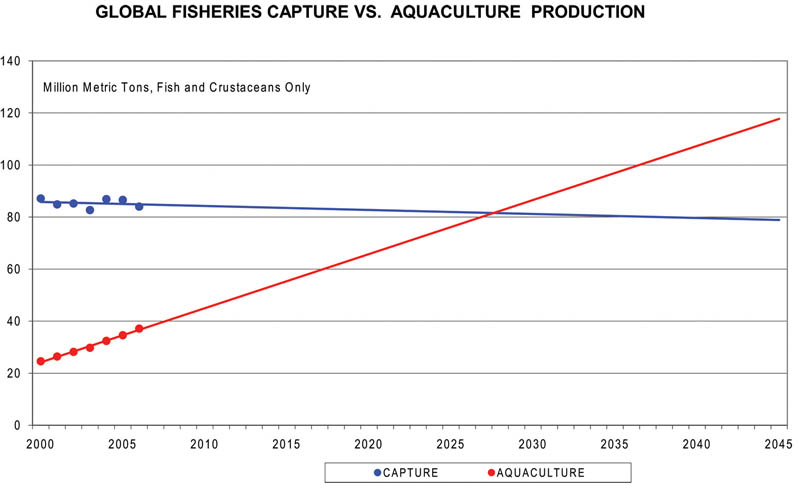 The market composition for the global fish catch comprises (i) fish sold fresh, frozen, cured, and canned on the edible side, (ii) other (primarily pet food and bait), and (iii) for reduction to fishmeal and oil. The data clearly show that the volume of fish sold frozen, cured, and canned has been decreasing, whereas the amount of fish sold fresh has been increasing. The fish used for reduction to fishmeal and oil has also been decreasing and now accounts for about 20% of the total fish landed. The explanation for the reduction in fish sold canned, cured, and frozen is that, as third world countries develop, their populations require more animal and fish protein, thus the locally caught fish are consumed at home rather than processed. The market distribution for the global fish catch is shown in Figure 3.

A number of fish species are caught specifically for the production of fishmeal and oil, but from the perspective of the omega-3 market, only the oil from anchovy, jack mackerel, and Atlantic menhaden are suitable, with the menhaden being borderline. Other fish species are caught for edible purposes and the cuttings or by-products converted to fishmeal and oil. In this group only the oil from sardine/pilchard, tuna, and hoki (Blue Grenadier) are suitable for the omega-3 market. It has been estimated that about 83% of the production of fishmeal and oil comes from whole fish and 17% from cuttings and by-products (FIN [Fishmeal Information Network], 2008). The species suitable for omega-3 oil (both whole fish and cuttings) account for about 17 million metric tons (MMT) or 52% of the overall 33 MMT. Salmon, both wild and farmed, is marginal at best for the omega-3 market even though several companies sell the oil for this purpose. In salmon, the total overall omega-3 content is low, and depending on what is fed to the farmed salmon, it can be lower than the wild species, especially if high levels of vegetable oils are used in the feed. The extreme situation, of course, is catfish and tilapia, which have negligible levels of the omega-3 fatty acids because fish oil is not used in their feeds, yet they are sometimes marketed as omega-3 rich products. Salmon oil is in desperate need of real-time fatty acid profile analyses of commercial batches to determine how it fits into the omega 3 scheme.

The individual omega-3 fatty acids in the major groups of commercially available fish oils are compared in Table 1. The values in Table 1 are averages and subject to seasonal variations in composition, fish catch, available food, and others. Therefore, I usually suggest that even though oils below the red line might seem marginal or completely unacceptable, producers should still test these oils over the season (monthly or by batch if that is possible) to determine whether there are times when these oils might have unusual fatty acid profiles. The table gives ranges for the principal omega-3 fatty acids in anchovy, jack mackerel, and hoki, which support the fact that these oils do vary. Pollock, Norway pout, and wild salmon are other examples where there might be individual batches of oil that are much higher in omega-3 than the norm. Some of the literature data indicate that there might be marked differences in the fatty acid composition of the oil depending on whether it comes from the liver or the depot fat. A gas chromatograph in the processing plant could pay big dividends if it were able to identify high omega-3 batches over the processing season. 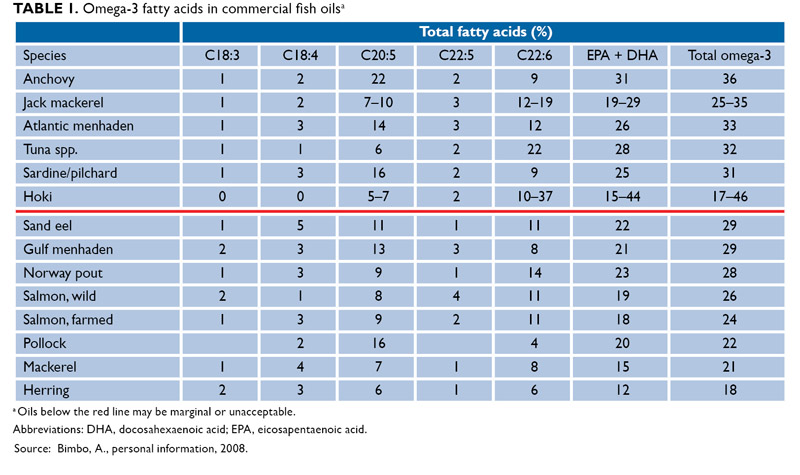 Whether it is whole fish caught specifically for fishmeal and oil production or cuttings from the edible fisheries, the raw material is generally processed in the same way. The fish are cooked and pressed to remove the liquids (oil and water), the solids are dried, and the liquid is separated into oil and water. The water phase is concentrated by evaporation, and the concentrate is added back to the fish solids prior to drying. Bimbo (2000) has thoroughly discussed the process.

Another category of raw materials that can be used for omega-3 oil production includes krill, single-cell organisms such as marine algae, and genetically modified oilseed crops. These will be addressed in Part 2 of this paper (scheduled for April 2009).

Although fish oil is produced in more than 30 countries, six groups account for almost all of the fish oil production. For this paper, I have removed Denmark and Sweden from the EU (European Union)-27 category and included them in the Scandinavian group. Global fish oil production is shown in Figure 4. 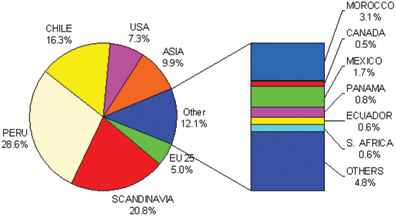 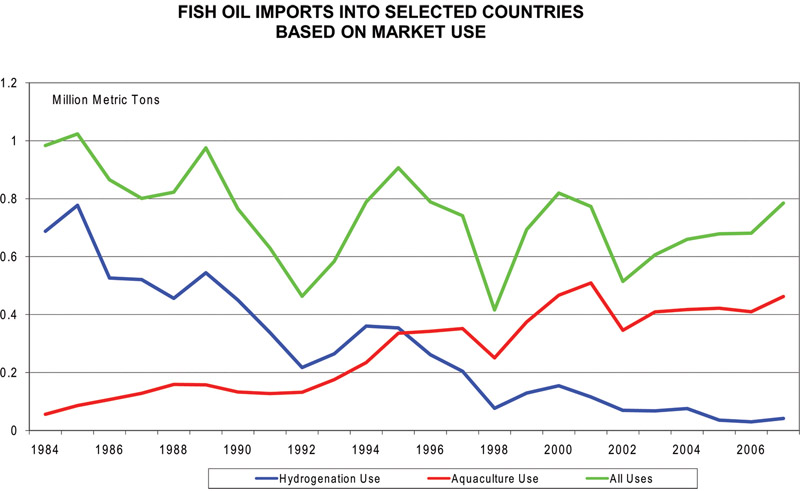 The omega-3 market is generally small and only began to develop in the mid-1990s. Today it represents about 10% of the global crude fish oil production. If there was a major supply interruption (for example, another major El Niño event) then the market that could afford to pay the higher premium for the omega-3 oils would get the oil. That market would be the nutraceutical market, not aquaculture.

Look for part two of this article in the April issue of inform.

Anthony P. Bimbo is a consultant on marine oils, working out of Kilmarnock, Virginia, USA. He may be contacted by e-mail at apbimbo@verizon.net.