Solid fats are widely used to provide a desired texture in structured food products such as margarine and spreads. The hydrogenation process can produce solid fats from vegetable oils that are liquid at room temperature, and partially hydrogenated vegetable oil has been a common ingredient in food products. However, trans fats generated during partial hydrogenation are known to increase the risk of coronary heart disease by raising the level of bad cholesterol (low-density lipoprotein, LDL) and lowering the level of good cholesterol (high-density lipoprotein, HDL). Consequently, the US Food and Drug Administration (FDA) has declared that partially hydrogenated oils will no longer be considered "Generally Recognized as Safe" (GRAS) and that food companies must phase out their use by 2018.

Palm oil, coconut oil, fully hydrogenated vegetable oils, and their modified oils have become the most popular alternatives to trans fats in the food industry. However, these alternatives contain high contents of saturated fats.

Structuring edible oil with an organogelator has become an important research strategy for replacing trans fats without increasing the amount of saturated fats (Marangoni, 2012). An organogel, also called oleogel, is a class of gel made of a liquid organic phase immobilized by a three-dimensional network formed by an organogelator.

Although many types of organogelators have been developed, plant waxes such as candelilla wax (CW), rice bran wax (BRW), sunflower wax (SW), and carnauba wax are of great interest due to their availability, low cost, and great gelling ability. Some plant waxes have demonstrated potential health benefits. For example, when rats were fed with diets containing up to 1% SW, their serum cholesterol levels were lowered. It was also found that gelation of oil with an organogelator can control the release of lipids into the blood which, in turn, attenuates the post-prandial increases in triglycerides, free fatty acids, and insulin levels induced by the acute ingestion of fat. Therefore, one can expect multiple health benefits from food products that have been structured using organogels.

In addition, most plant waxes are by-products. For example, SW is produced during the refining of sunflower oil. Therefore, developing food products containing wax-based organogels facilitates the use of these agricultural by-products.

Sunflower wax (SW) can make a gel with concentrations as low as 0.3 wt%. Candelilla wax and rice bran wax can also form gels at concentrations of 0.5-1 wt%. In comparison, partially hydrogenated soybean oil containing trans fats needed a minimum concentration of 18 wt% to form a gel. This indicates that only a small amount of wax may be used in place of a large amount of hydrogenated vegetable oil to achieve a similar texture. Fig. 1 shows the preparation of the organogel of 0.5% SW in SBO.


Fig. 2 shows how the firmness of organogel depends on the amount of wax. Three waxes, SW, RBW, and CW were compared. As expected, organogel firmness increased with an increasing amount of wax. SW showed the greatest firmness, followed by CW and then RBW. The organogel containing 3% SW showed greater firmness than the gel containing about 20% hydrogenated soybean oil. The excellent gelling property of SW and the high firmness of the organogel were explained by the effective way in which the oil was immobilized with networks of numerous thin plate-like crystals (Hwang et al., 2015). 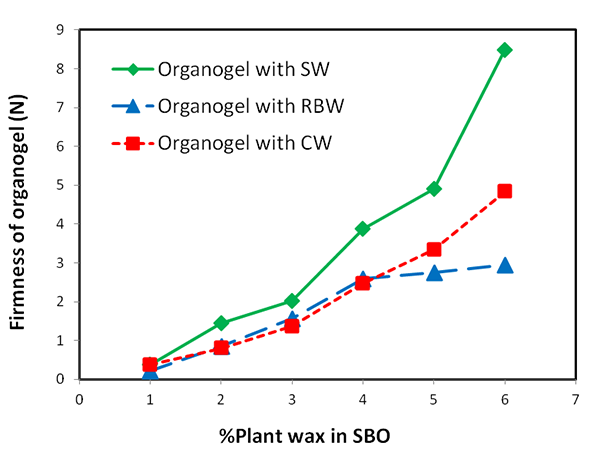 Preparation of margarine from organogel

A wax-SBO organogel was incorporated in a margarine formulation comprised of 80% organogel, about 20% water phase, and several minor ingredients such as emulsifiers and salt. Unfortunately, margarines containing CW showed phase separation. RBW-containing margarines showed very low firmnesses as shown in Fig. 3. Margarines prepared with SW-organogel showed the most promising results. It was found that while the firmness of commercial spread products ranged from 0.14-0.57 N, the hard margarine products showed much higher firmness ranging from 16.7-20.2 N. These results indicate that about 2% SW may be used in margarine to achieve the firmness of a commercial spread product. Firmness of the hard margarine could be achieved with 10% SW. 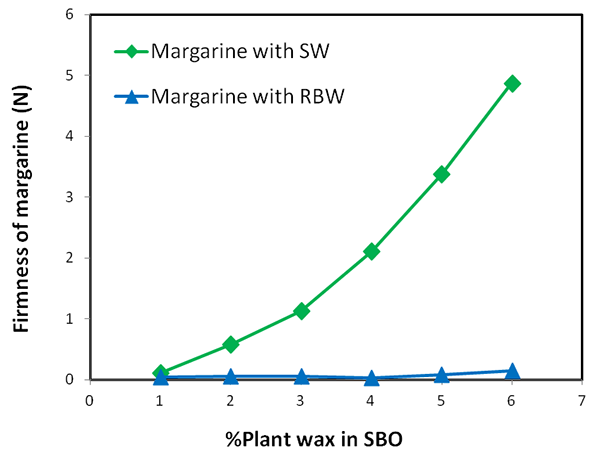 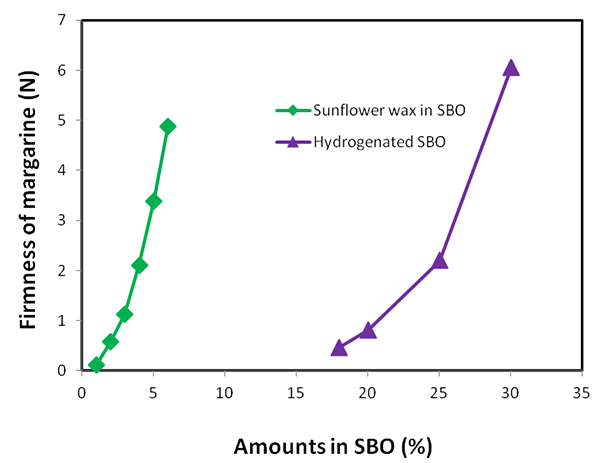 Since SW-SBO organogels worked well in the margarine formulation, a variety of healthy vegetable oils were evaluated to see whether they also could provide margarines with reasonable firmness and other properties. Fig. 5 shows the firmnesses of margarines prepared with 3% SW and 12 other vegetable oils. Their firmnesses were found to be comparable to that of SBO margarine, indicating that a number of healthful margarine and spread products can be made from vegetable oils rich in polyunsaturated fatty acids using SW as an organogelator. 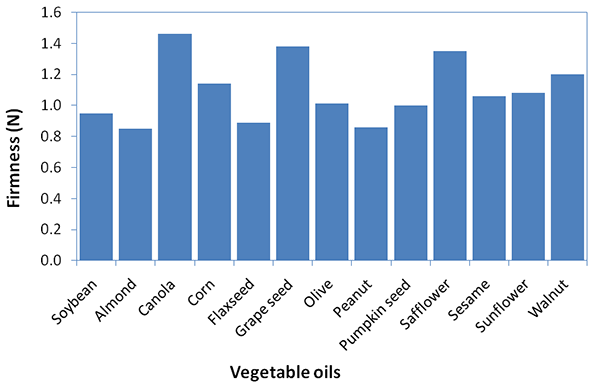 Other food products with high commercial potential that have been prepared from organogels of vegetable oils include ice cream, cookies, meat, bread, and chocolate.

Hong-Sik Hwang is a research chemist at the National Center for Agricultural Research (NCAUR)-Agricultural Research Service, US Department of Agriculture in Peoria, Illinois, USA. He has been with NCAUR since 2010. Prior to joining NCAUR, he worked for nine years at Indium Corporation. Hwang received his Ph.D. in organic chemistry from Texas Tech University, Lubbock, Texas, USA, in 1996. He can be contacted at HongSik.Hwang@ARS.USDA.GOV.