Editor's note: The following article is based on the address given by Ken D. Stark, the 2009 AOCS Young Scientist Research Award winner, at the 100th AOCS Annual Meeting & Expo, held in Orlando, Florida, USA, May 3-6.

The quantity and type of dietary fat intake influence cellular membrane composition and lipid metabolism, which can impact cardiovascular disease (CVD), obesity, inflammation, and neurological development and function. Consumption of some types of fatty acids, such as omega-3 fatty acids, provides health benefits, while others, such as saturated and trans fatty acids, can potentially increase the risk of disease. Assessing individual dietary and cellular fatty acids, and determining their specific impact on biological processes, is becoming increasingly important. For example, whereas ª-linolenic acid (ALA, 18:3n-3), eicosapentaenoic acid (EPA, 20:5n-3), n-3 docosapentaenoic acid (DPAn-3, 22:5n-3), and docosahexaenoic acid (DHA, 22:6n-3) are all omega-3 fatty acids, they accumulate in different lipids and tissues, and we are continually defining their distinct roles in health and disease.

Nutrient intakes including fatty acids can be estimated at the population level through aggregate methods such as food disappearance data, but for clinical utility, approaches that provide data specific to individuals are required. Estimates of an individual's dietary intake can be completed by average intake methods that involve food frequency questionnaires and surveys, and by daily food consumption methods that include recent intake recall and food diaries. Assessing nutrient intakes at the level of the individual is associated with a series of limitations that are spread throughout the process of estimating the actual intake. This includes the skill and consistency of the researcher during participant interviews, and the participant's ability to accurately report his or her intake and the ability to resist tendencies to change dietary habits during the observation process. There is also potential for errors and inconsistencies in handling the reports, both at the level of the researcher and in the software being used. Finally, the dietary assessment is limited by the actual food database being utilized. This includes potential errors in the accuracy and precision of the existing data, inconsistent methodological approaches to generate nutrient composition data, the completeness of the data, and the constantly changing food supply.

In addition, 16:1n-7 and 18:1n-7 are potential markers of low-fat/high-carbohydrate diets. Increased contents of n-7 fatty acids in tissues and blood reflect increased endogenous fatty acid production stimulated by excess carbohydrate intake. This increased endogenous 16:0 production results in increased ∆-9 desaturation of 16:0 (at the n-7 position) with potential elongation to 18:1n-7. Low exogenous fat intake reduces the availability of 18:1n-9 and 18:2n-6 and results in greater incorporation of n-7 fatty acids into tissue lipids. The use of models combining four to five fatty acids measured in blood have been successful in differentiating between moderate- and low-fat diets. Empirical relationships developed by Bill Lands for determining the fatty acid compositions of human plasma phospholipids from dietary intake are available online (http://efaeducation.nih.gov/sig/dietbalance.html ).

Blood-based biomarkers have a practical advantage over tissue-based biopsies. Adipose biopsies can provide very good, long-term dietary intake information, but they are far too invasive to be used at the level of routine clinical screening. Plasma and erythrocytes tend to be the blood fractions analyzed most often, although whole blood, platelets, and leukocytes have been analyzed as well. Plasma and erythrocyte measures tend to reflect shorter-term intakes, but they may be suitable for estimating long-term intake. The preparation of plasma-free erythrocytes and erythrocyte-lipid extraction requires specialized and time-consuming methodologies, but the fatty acid composition of the total lipid extract of erythrocytes is extremely similar to the fatty acid composition of erythrocyte phospholipids. Lipid class separation in erythrocytes prior to fatty acid determinations is unnecessary.

Plasma lipids, on the other hand, include triacylglycerols, cholesterol esters, and phospholipids. Fatty acid determinations of plasma total lipid extracts are often avoided because the fatty acids in the triacylglycerols component can be influenced by recent dietary intake and the triacyglyerol pool can be highly variable depending on whether the individual was in a fasted or fed state. Therefore, plasma-based fatty acid determinations are typically associated with prior lipid class separation such as thin-layer chromatography. A finger-tip-prick blood sample on chromatography paper is an extremely rapid blood collection technique that does not require trained phlebotomists and holds considerable potential for field studies and screening (Fig. 1). This technique does limit the results to the fatty acids composition of total lipids in whole blood, and it is very difficult to isolate specific blood fractions and individual lipid classes. However, it is important to point out that in the Physicians' Health Study, it was higher EPA + DHA levels in whole blood that was  associated with lower risk of sudden cardiac death. 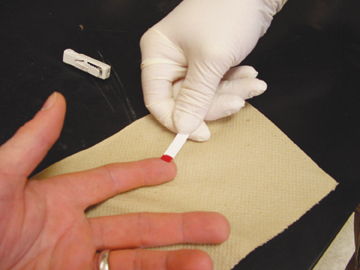 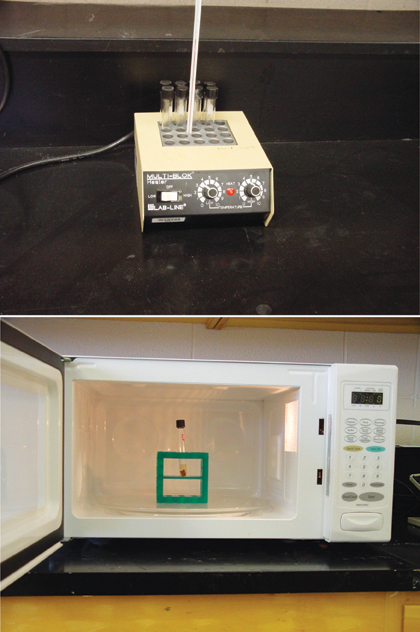 Combining these processing techniques with fast gas chromatography can result in tremendous gains in sample throughput and increased cost efficiency, and a lower cost per sample. It is estimated that more than 350,000 North Americans die each year from sudden cardiac death, while fish oil supplementation is associated with a 45% reduction in the risk of sudden cardiac death. Regular monitoring of omega-3 fatty acid intakes through blood analyses could prove highly effective for first-line prevention of sudden cardiac death. High throughput, cost-efficient analytical methods could enable fatty acid determinations in large-scale clinical trails and potentially lead to routine clinical fatty acid profiling by health care professionals.

Ken Stark received an undergraduate degree from the University of Toronto and he completed his graduate studies at the University of Guelph. While at Guelph, he was an AOCS honored student. He spent two years at the National Institutes of Health as a post-doctoral fellow examining dietary and behavioral influences on maternal-fetal metabolism of fatty acids. He is currently an assistant professor in the Department of Kinesiology at the University of Waterloo where he heads the Laboratory of Nutritional & Nutraceutical Research. Contact him at kstark@uwaterloo.ca.