Food texture and nutrition: the changing roles of hydrocolloids and food fibers

Creating healthful food formulations is one of the key challenges facing the food industry. In the past, the production of food ingredients has led to the purposeful extraction, removal, substitution, and even disposal of many nutritional components. With the drive toward “naturalness” and the use of “less processed” food ingredients, the food texture industry is responding and changing. We are seeing:

The texture of food is one of the primary attributes affecting its quality. Along with taste and smell, texture defines a food and how we perceive that food’s flavor and mouth feel. Having a texture that we perceive as appropriate for the foodstuff concerned is vitally important to our enjoyment of food. For example, if we eat a low-fat yogurt that has a rich and creamy texture, we are less likely to perceive it as low-fat and we will enjoy it more. With the current drive toward more healthful eating, food texture and the development of creative texture solutions are becoming increasingly important.

Hydrocolloids have traditionally been used to provide textural functionality in foods such as gelling in jams, fruit fillings, and confectionery; thickening in dairy-based drinks and desserts; and water binding in meat products (Fig. 1). 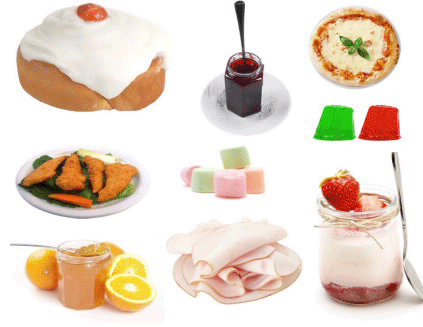 Fig. 1. Some typical food applications that make use of the textural functionality of food hydrocolloids: bake stable fillings and glazes in bakery products; gelling function in jams, marmalades, and jellies; thickening and stabilization function in yogurts and dairy based desserts; confectionary; water binding in cooked meats; crispy coatings and oil barrier formation in breaded/deep-fried products.

By definition, hydrocolloids are substances that form colloidal systems when dispersed in water. Also known as gums, they are typically polymers of carbohydrates (also proteins) and are derived from a wide range of natural sources or are produced synthetically (Table 1). Hydrocolloids are widely exploited in industry, not just in the food sector, for their ability to control important functional properties including thickening and gelling, stabilization, dispersion, and emulsification. 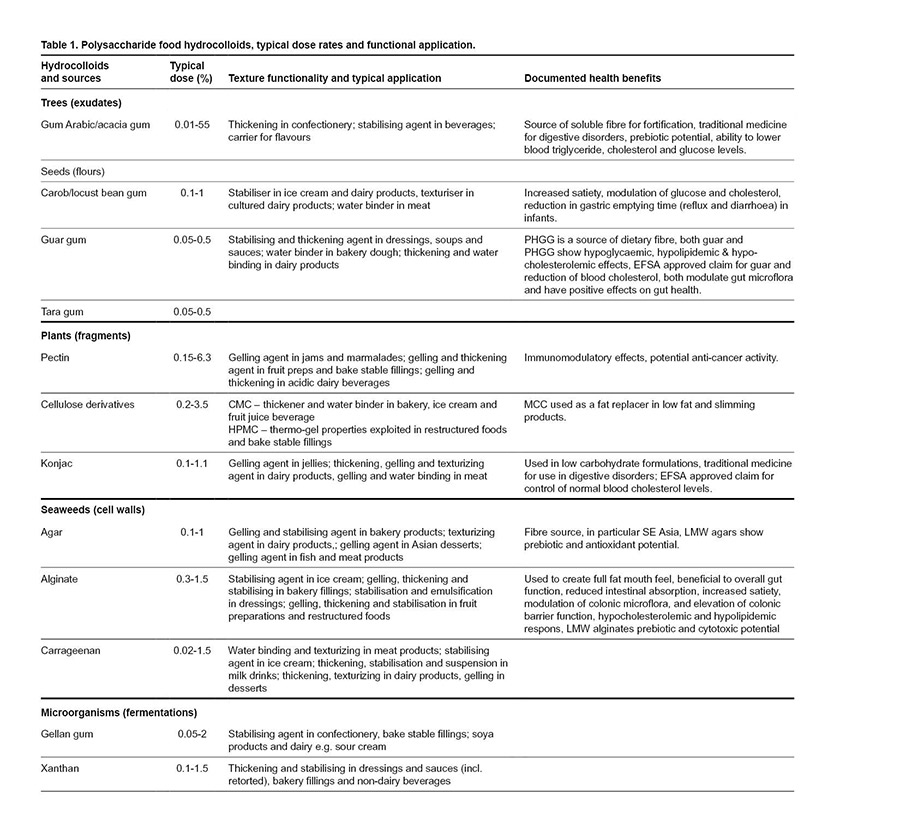 As gelling and thickening agents, hydrocolloids are classed as food additives and their use is subject to EC Regulation 1333/2008. They are generally added at very low dosages (<2%, Table 1). This is because they typically have high molecular weight, and technological functionality can therefore be achieved using such low levels of inclusion. They are a versatile group of food additives that can be used to create a spectrum of different gel types and viscosities as appropriate for their intended application. The intrinsic properties, functional behavior, gelling mechanism, and nature of the colloidal systems that are formed vary. Each hydrocolloid behaves differently under different processing and formulation conditions such as pH and temperature—both of which can affect key parameters like solubility and gel stability. All of these factors can be manipulated to produce exactly the right texture solution. Furthermore, blends of hydrocolloids can be used synergistically (Fig. 2). 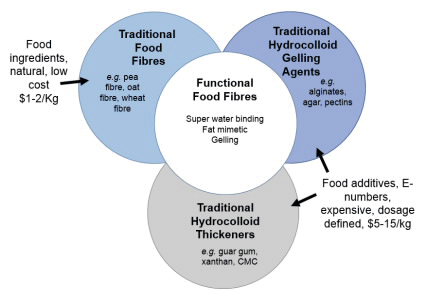 The demand for food hydrocolloids has risen significantly in recent years, partly in response to the rapid expansion in the convenience foods and ready meals sector but most importantly as a response to the rise in consumer awareness and growing demand for more healthful foods. Recent projections by Marketsandmarkets.com in October 2014 [1] estimate the market for hydrocolloids to exceed €7.9 million (~$9.63 million) by 2019. Hydrocolloids are finding ever-increasing application on the basis of functional properties that allow for the formulation of more healthful foods. Formulating for no/low fat, sugar, and salt (sodium) is a key driver. However, removing such ingredients from foods has significant implications on their functional, textural, and organoleptic attributes. Hydrocolloids can be used to provide functional solutions that allow for the reduction and replacement of these ingredients.

Reducing and replacing ingredients with hydrocolloids

Reducing sugar: Pectin is a natural polysaccharide found in the cell walls of higher plants. It is widely used to gel, thicken, and stabilize foods, particularly, fruit-based applications. It is possible, through processing, to modify the basic galacturonic acid backbone of pectin to produce LM (low methoxy) and amidated LM pectins (LMA) which have specific gelling properties. These pectins will gel in low-sugar concentrations (<60%) and thus have wide application in low-sugar jams, marmalades and jellies, and specialist fruit-based dietary products such as those marketed to diabetics.

Reducing fat: By using hydrocolloids, calorie-dense fats and oils can be replaced with what is essentially structured water. Initially, starch gels were used, being characteristically soft, fat-like, and spreadable. Improved formulations now exist that make use of hydrocolloids as “fat mimetics.” Cellulose derivatives like MCC (microcrystalline cellulose) are used in low-fat/no-fat ice creams and dressings. When activated in water with high shear, MCC forms a 3D network with unique fat mimetic properties with shear thinning, thixotropic behavior, and plastic texture.

Reducing salt: The relationship between viscosity and flavor perception is well- established; changes in viscosity are known to affect the release of both aroma compounds and of tastants like salt and sugar. Viscosity itself also contributes to the overall mouthfeel of a foodstuff. Innovative advances are being made in the use of hydrocolloids to control the microstructure of foods.

Although not widely commercialized outside of Asia, there is substantial scientific support for the potential health benefits to humans of low-molecular-weight (LMW) hydrocolloids. This is not surprising given that many hydrocolloids including agar, konjac, and gum arabic are used as traditional medicines in different cultures. Some LMW agars have demonstrated prebiotic potential in vivo, also antioxidant and hepatoprotective effects; similarly, LMW alginates have demonstrated prebiotic effects and there is also evidence for their cytotoxic activity; LMW pectins are known for their immunomodulatory properties (Table 1).

Hydrocolloids can also be exploited for their inherent nutritional value as they can contain a large proportion of dietary fiber, between 60–90% (Viebke, et al., 2014). [2] In general terms, dietary fiber is primarily derived from the cell wall material of plants (cereal foods, fruits, pulses, nuts, and vegetables) and is composed of complex, non-starch carbohydrates (cellulose, hemicellulose, pectins, gums, and mucilages) of 10 or more monomeric units and ligning — none of which are hydrolyzed in the small intestine of humans. From a regulatory perspective, a precise definition of dietary fiber was determined by Codex in 2009, this is discussed in detail by Viebke, et al., 2014.

Dietary fiber can be further classified on the basis of its solubility. Fibers are classified as either soluble (pectins, gums, and mucilages) or insoluble (cellulose, hemicellulose, and lignin). Both types of fiber are important to human health as they have different physiological effects and both implications for texture: hydrocolloids are potential sources of both. The majority of commercial fibers in the United States are insoluble while in Europe both soluble and insoluble fibers have similar market share. Insoluble fibers are typically derived from cellulose, oat, wheat, and pea, among others, and provide textural functionality such as water binding, thickening, anticaking, and dough improvement. The soluble fibers market is dominated by inulin along with polydextrose and resistant starches. These fibers are used primarily for fiber fortification and some for sugar replacement. According to a Markets and Markets report (March 2014) [3], the global market value for fibers in 2013 was $2.272 million with a forecasted value in 2019 of $4.210 million—a compound annual growth rate (CAGR) of 13.1%.

In the past, hydrocolloids have not been widely used for fiber fortification, primarily on account of cost and formulation issues. The use of hydrocolloids is relatively expensive at $5–$15/kg versus the cost of traditional dietary fiber ingredients such as those derived from pea, wheat, and oat (typically $1–$2/kg). The superior gelling and thickening properties of hydrocolloids also makes it difficult to include them at physiologically beneficial levels or at a sufficient level to make a fiber claim.

An exception is partially hydrolyzed guar gum (PHGG) which is a variation of standard guar gum that is sold in the marketplace. As the name suggests, it is a hydrolyzed version of guar gum. It is a clear and colorless material unlike traditional guar which is cloudy and has a viscosity in the range of 7–12cps at 5%, whereas standard guar typically has a viscosity of 3000–5000cps at 1%. Commercially available PHGG comprises approximately 80% dietary fiber and low viscosity allows it to be used at concentrations sufficiently high to have a dietary fiber effect.

With the rapidly accelerating growth of the soluble fibers market, the challenge for hydrocolloids manufacturers must be to push the development of innovative and cheaper processing methodology that will allow for the production of lower-molecular-weight products with nutritional potential.

Traditionally, the hydrocolloids and fibers sectors have been viewed as distinct entities, albeit with some overlap in functionality (technical or nutritional), but with advances in processing technology and the drive toward “naturalness” and “less processed” food ingredients, we are seeing the overlap expanding and the emergence of a new entity of “functional fibers” (Fig. 2). These are generally minimally processed vegetable, fruit, and cereal materials that contain both soluble and insoluble fractions with different functionalities. Successful products currently in the market place are derived from citrus and oat.

From the legal point of view, in Europe, the manufacturing process determines whether a functional fiber is an additive (with an E--number) or a food ingredient. As previously mentioned, hydrocolloids fit into the first category, being extracts of the original source material and generally modified physically and chemically so that they can no longer be considered food ingredients. Traditional fibers (e.g. fruit fibre, pea fibre, oat fiber, inulin, FOS, and resistant starch) are food ingredients; however, the distinction is somewhat blurred with regard to functional fibers.

More sophisticated processing techniques are being employed to produce functional fibers, including chemical, enzymatic, mechanical (shearing and microfibrillation), thermal, or thermos–mechanical (extrusion) treatments. The resulting products have more controllable particle size and superior water binding ability that can also provide viscosity and gelling behavior that is on a par with some hydrocolloids. Consequently, functional fibers are now being used to provide textural functionality that has, until recently, been fulfilled by hydrocolloids. Functional fibers are mainly used in bakery and meat applications where water binding is key but also as stabilizers in beverages, to prevent the formation of ice crystals in frozen foods, and as a barrier to oils and fats in breaded/fried foods.

With the general global push toward achieving food security, resource efficiency, and minimization of waste, the future of functional fibers looks interesting. Smart usage of agricultural waste and processing by products is at the forefront of many research agendas. Many biomass streams have already been successfully converted to functional ingredients for the food industry and fiber producers are continuously looking for promising new candidates.

Sarah Hotchkiss is projects manager at CyberColloids. CyberColloids are experts in hydrocolloid and polysaccharide chemistry. The company is engaged in research activities aimed at developing novel processing methodologies, new ingredients, and innovative applications for new raw materials and downstream products that are derived from plants and seaweed—thus providing creative research solutions and adding value to existing processing practices. She can be contacted at sarah@cybercolloids.net.

What’s an E-number?
Since 1986, food additives—colors, preservatives, anti-oxidants, stabilizers, gelling agents, thickeners, etc.—have been identified in food labels, either by name or by E-number. An E-number says that an additive has been approved for its intended use across the European Union. Approval depends on scientific testing and monitoring and is reviewed in the light of new scientific information.