The need for rapid, onsite chemical analyses is as apparent as it has ever been, especially for compounds detrimental to health or to the environment, such as toxic industrial species, explosives, chemical warfare agents, and environmental toxins. Onsite analysis can allow early warning of a harmful release, saving time and resources and increasing safety compared with lab analysis of field samples. The utility of a field-portable, analytical device goes well beyond security applications, though. Many chemical analyses would benefit from being performed at the original location or native environment of the sample of interest. 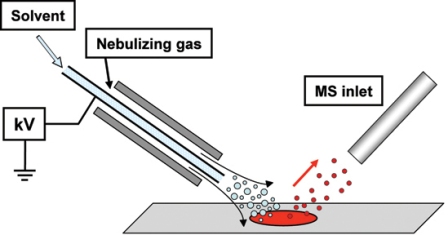 Several analytical technologies with varying levels of performance and feasibility have emerged as candidates for continued development and evaluation as portable analytical instruments. Of these technologies, several exhibit significant drawbacks, including long analysis times, high false positive and negative rates, high limits of detection, and narrow applicability.  Mass spectrometry (MS) has the potential to fulfill the major criteria for field-portable analytical instruments. Of the general-purpose methods of chemical analysis, MS has proven to be one of the most sensitive techniques, and detection of ultra-trace quantities of specific compounds has been demonstrated, even from complex mixtures (as little as 1 part in 1012, even ca. 10-15 g in favorable cases). The high specificity of MS comes from tandem mass spectrometric analysis (two or more coupled stages of mass analysis), which allows both molecular weight and structural data to be gathered.

Recent advances in vacuum and electronic technologies have led to the miniaturization of MS instruments, thus making portability feasible, and commercialization of portable MS systems has grown rapidly. Most of the commercial equipment currently available uses membrane introduction or gas chromatography (GC) in combination with MS. Although this offers an added degree of separation, it also increases the time required for analysis. In a typical GC/MS analysis, preconcentration, followed by thermal separation of components on a capillary column, may increase the analysis time to several minutes or hours, with the actual MS analysis taking only a small percentage of the total analysis time.

Several research groups have designed and reported handheld MS prototypes (Ouyang et al., 2009), and while these instruments typically require as little as 50 ms to acquire a complete mass spectrum, conventional sample preparation typically can take several hours, depending on the sample matrix in question and the desired analyte. While a significant savings in time is realized by performing analyses onsite, these instruments still require extensive preparation of samples before their introduction into the GC interface and lack the versatility in analysis and breadth of applicable samples that is desired for field-portable instrumentation.

Ionization of analyte outside of the instrumental vacuum system can be advantageous compared with traditional analytical methods that require extensive sample preparation and ionization in vacuo. Electrospray ionization (ESI), for which John Fenn was awarded the Nobel Prize in Chemistry in 2002, readily allows for the analysis of chemicals in solution and has revolutionized the analysis of biological macromolecules and thermally labile compounds. Atmospheric pressure chemical ionization (APCI) has allowed rapid analysis of volatile and semivolatile chemical species in complex gas matrices without preconcentration. Techniques such as ESI and APCI have allowed analysis of liquid and gas phase analytes, but there are still substantial limitations to these ionization methods. Using ESI requires that pure liquid analytes be dissolved into organic solution before spraying and that natural aqueous solutions (e.g., contaminated groundwater) undergo extensive preparation, including filtration, desalting, and addition of organic solution, in order  to attain acceptable ionization efficiencies. There is also one glaring constraint: the lack of surface analysis ability.

The ability to directly analyze untreated condensed phases and surface-bound species at ambient conditions had not been investigated until recently. New ambient mass spectrometric methods (Cooks et al., 2006), in which ionization takes place both at atmospheric pressure and directly from the native sample without prior preparation, have rapidly been developed, and several interesting applications have come from their implementation. As recently proposed by Venter et al. (2008), these newly developed methods can be distinguished by the processes used for desorbing analytes from the sampling surface (momentum, laser, or thermal desorption) and the subsequent ionization (ESI or APCI) of these molecules.

One of the simplest and most versatile of these ambient MS techniques is desorption electrospray ionization mass spectrometry (DESI-MS; Cooks et al., 2006). DESI-MS uses charged microdroplets of solvent (usually 1:1 methanol/water) generated by traditional ESI methods to desorb condensed-phase and surface-bound analyte, releasing these neutral molecules as secondary ions. Recent fluid dynamic simulations have shown that a thin solvent layer quickly forms on the surface in question, and as new microdroplets impact this layer, progeny droplets containing analyte are released and evaporate with assistance of the heated capillary inlet of the mass spectrometer, forming ions from the desorbed neutral molecules. A schematic of DESI-MS can be seen in Figure 1. Although operating parameters can be tuned to provide optimal performance for certain analytes, typical voltages used for electrospraying are 3-5 kV and solvent flow rates are ~3 µL/min. Both the DESI emitter and the capillary inlet of the mass spectrometer are positioned within 1-2 mm of the sampling point. The incident angle of the DESI source and collection angle of the atmospheric inlet are fairly critical, being 45º and 15º relative to the sample surface, respectively.

As in traditional ESI, DESI is a "soft" ionization method, yielding mostly protonated or deprotonated molecules in positive or negative ion mode, respectively. Multiply-charged ions can form, and adduct formation with low-mass alkali metals is common, considering the amount of salts and minerals that are present in untreated samples. DESI-MS allows highly sensitive analysis, and picogram detection limits are routinely obtained. The solvent used in DESI can also be manipulated, not only to enhance ionization efficiency of certain species but also to increase selectivity of the ions formed. For example, ions of enzyme-substrate complexes can be readily formed by addition of specific substrates to the DESI solvent.

To date, DESI-MS has been applied to several classes of chemicals, such as peptides, pharmaceuticals (as depicted through direct tablet analysis in Fig. 2), natural products, agricultural chemicals, and industrial polymers. There is also a vast array of surfaces and substrates that DESI-MS can be applied to, such as glass, plastics, leather, metal, plant surfaces, ultra thin-layer chromatography plates, powders, and biological matrices such as urine, saliva, and stomach contents. Although the quantity of literature using DESI-MS is continually growing, it is still a relatively young and untested technique. Its ability to directly analyze unconventional samples and surfaces has led to success in experiments that would be traditionally viewed as haphazard. 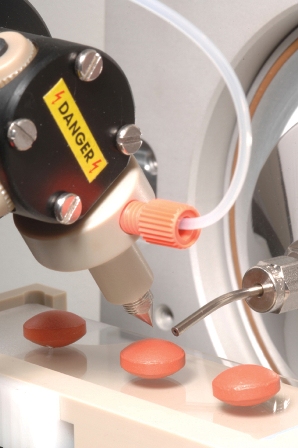 More importantly, DESI has been recently demonstrated on field-portable MS systems, a coupling designed to allow rapid, direct chemical analysis from surfaces in their native environment, ridding the need for sample transport back to satellite laboratories for analysis. The research groups of R. Graham Cooks and Zheng Ouyang at Purdue University (West Lafayette, Indiana, USA) have coupled DESI-MS with both portable (Mulligan et al., 2006) and handheld (Ouyang et al., 2009) systems. These prototype instruments mark an important step toward a field-portable MS instrument, but these systems are not constructed for or rugged enough for constant operation in harsh environments. Recently, ICx Technologies, Inc. (Arlington, Virginia, USA)/Griffin Analytical Technologies LLC  (West Lafayette, Indiana) has developed a field-ready mass spectrometer capable of ambient MS (Wells et al., 2008). It is the first robust, commercial-grade instrument of this kind. Customized DESI-MS ionization sources are also currently available from Prosolia, Inc (Indianapolis, Indiana) for most laboratory-scale, atmospheric inlet mass spectrometers. Commercialization of technologies like those of ICx/Griffin and Prosolia is a key milestone in making this technique available to scientists and practitioners in all fields of science.

It is exciting to think of the impact that DESI-capable, field-portable systems could have in the near future, as they are well suited for law enforcement and corrections, forensics, and homeland security. The robust nature of the technique suggests it could be applicable to future threats and samples of interest. This technology could also have an immediate impact on industrial hygiene and quality control, and the ability to directly analyze consumable products as they are being made, imported, or sold could revolutionize food safety. Researchers are already busy applying DESI-MS to several high-profile food safety concerns, such as melamine screening in milk products and bacterial profiling in foodstuffs (for more on melamine, see inform 20:563-565, 2009).

In the essay "Hazards of Prophecy: The Failure of Imagination" in Profiles of the Future (1961), Arthur C. Clarke stated, "Any sufficiently advanced technology is indistinguishable from magic." While there is still much to do to optimize these instruments, field-portable DESI-MS systems have already been shown capable of rapid and routine analysis of traditionally difficult samples.