The American Cleaning Institute (ACI), which represents producers and consumers of oleochemicals in North America, has long requested government policies that limit the use of animal fats for biofuel production. But such requests have intensified as competition and prices for these historically low-cost raw materials continue to rise. Most recently, the trade group urged the US Congress and the US Environmental Protection Agency (EPA) to remove animal fats from all biofuel tax credit schemes as well as the EPA’s Renewable Fuel Standard (RFS) Program.

“We are not opposed to biofuels. We are opposed to misguided government subsidies that negatively affect the price and availability of animal fats, a key feedstock for the oleochemical industry,” said Douglas Troutman, ACI Vice President and Counsel, Government Affairs, in a recent statement.

“Energy tax credits, if used, should encourage the development and use of new raw materials that do not compete with established uses such as oleochemical production,” he added.

According to ACI, members of the US House Ways and Means Committee are currently examining ideas to reform the tax code. ACI hopes that the unintended consequences of energy tax incentives for using tallow as a feedstock will come up in these discussions.

For example, the American Jobs Creation Act of 2004 included a $1 per gallon ($0.26 per liter) tax incentive for production and use of biodiesel to make biofuel competitive with traditional diesel fuel. Additionally, the Energy Independence and Security Act of 2007 (EISA) established a requirement for blending of a minimum volume of biodiesel into traditional diesel fuel under the EPA’s RFS, beginning in 2010.

“Since passage of the American Jobs Creation Act of 2004, government policy has increasingly driven and subsidized the diversion of animal fats to biofuel production via tax credit supports,” said ACI’s Troutman.

Historically, the oleochemical industry consumed about 10% of the production of tallow and grease in the United States, according to the National Renderers Association (NRA). Domestic tallow production in 2012 fell 5% to 2.65 million metric ton from 2011 production.

According to the NRA, the use of animal fats in biodiesel production increased by 98% between 2010 and 2011 as the RFS mandate ramped up its volume requirements (see Table 1).

Consumption of tallow for biodiesel production in Europe has also risen with the implementation of the Renewable Energy Directive (RED) of the European Union (EU), which set a target for the EU to reach a 20% share of energy from renewable sources by 2020 and to achieve up to a 10% share for biofuels in its energy transport use.

Under RED, tallow receives double tax benefits because it is considered a waste product not directly obtained from agriculture. This makes it a more attractive feedstock for biofuel producers. In addition, the European Commission proposed to amend RED late in 2012 with the stipulation that food crop-based biofuels will be capped at 5%, which could lead to more use of biomass-based feedstock that includes animal fats.

When products of different categories are mixed, the entire mix is classified according to the lowest category in the mix. For example, if Categories 1 and 3 tallow are mixed then this blend is classified as Category 1.

Consumption of animal fats for soap and oleochemicals manufacture in the EU was steady at 547,000 metric tons of animal fats or about 22% of total fats consumed in 2011. EFPRA plans to release its 2012 statistics in the second quarter of 2013.

Given the supply inelasticity of animal fat, its increased consumption in the energy sector led to historic price rises in 2011 for tallow and greases (Fig. 1). 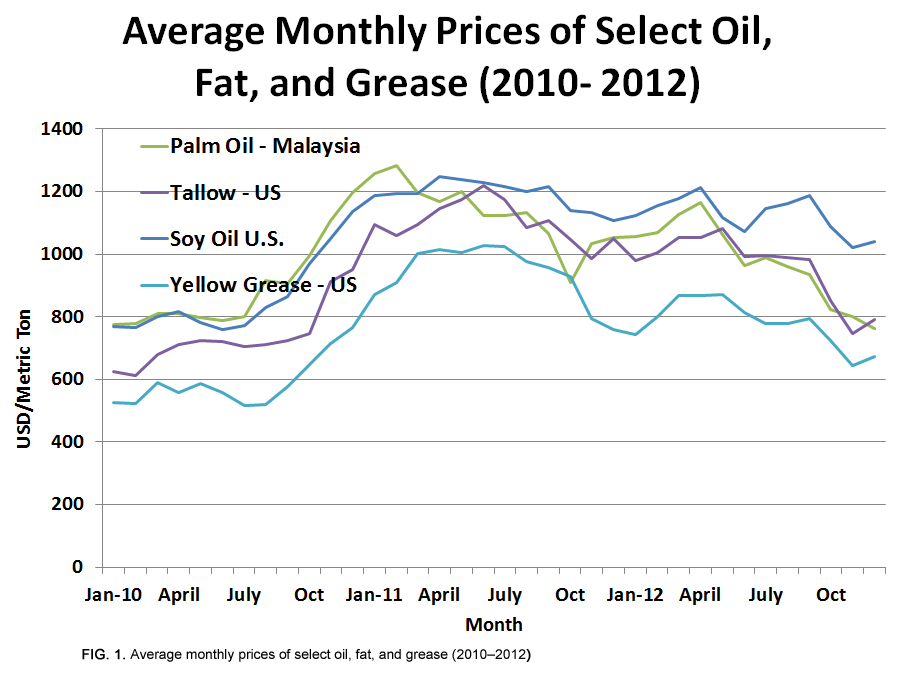 Tallow suppliers cannot respond to higher prices by expanding output since tallow is a by-product of meat processing. Tallow, previously a discount commodity, has now been commanding higher prices than palm stearin, especially in Europe. Palm stearin is increasingly being used to fill the hole in oleochemical raw materials supplies for those processors that rely heavily on tallow feedstock.

“In the medium term, we believe that stearin will greatly increase its presence in the EU fatty acid sector, whether directly as an input, or indirectly via larger imports of fatty acids from Southeast Asia as European tallow supplies become more constrained,” noted UK-based consulting firm LMC International on its 2012 Oleochemicals summary report.

LMC said it expects tallow prices to remain at historically high levels for a sustained period. Tallow and palm stearin, the main nonlauric raw materials for fatty acid production, are typically cheaper than crude palm oil. LMC noted that throughout 2011 and 2012, tallow prices were higher than they used to be even in relation to other oils and fats.

In the United States, tallow and grease prices saw record highs in 2011, according to the NRA. The average price for inedible tallow was $1,097 per metric ton, up over 34% from 2010 as reported by the US Department of Agriculture’s Agricultural Marketing Service (AMS).

Yellow grease averaged $957 per metric ton, up 38% from 2010. In 2011, the price of tallow was higher than that of palm oil for most of the year, while the spread between soybean oil and tallow narrowed very considerably.

“These lower prices also pulled tallow and grease down toward the latter half of the year. It must be noted, however, that the demand in the US domestic market did create a lag in the response to the downward pressure created by palm oil prices,” he said.

The NRA expects prices to recover in 2013 as palm oil prices are expected to have bottomed out.

“The average palm/soy spread over the last 10 years has been around $77 per metric ton but this more than doubled in 2012,” said Swisher. “Toward the end of the year, the spread was as high as $277 per metric ton. This spread is not sustainable and as stockpiles decline, prices for palm oil should rebound.”

Although tallow and grease use in the US biodiesel industry fell in 2012 by 6% compared to 2011, consumption in the feed, food, pet food, and oleochemical sector increased by 16% last year over 2011, according to the NRA.

Currently the NRA lumps all domestic usage of animal fats by taking production and subtracting exports and use in biodiesel. The US Census Bureau stopped reporting consumption data on tallow and grease in July 2012.

“Approximately 714,000 metric tons of tallow and grease went into the domestic biodiesel industry in 2012 which is down about 6% over 2011. This decline is mainly due to increased corn oil use in the biodiesel sector,” Swisher added.

“At the same time, DDGS going into the feed sector did not contain the energy that they once did, creating more demand for tallow and grease in feed rations,” he said.

For 2013, the NRA expects demand for animal fats to remain steady because of the increased RFS mandate, reinstated tax credits for biodiesel, continuous strong demand from the oleochemical industry, and added demand in the feed sector because of projected increases in domestic swine production and continued energy decreases in DDGS.

“Of course, as palm oil prices correct in early 2013 there could be added export demand,” Swisher noted.

Animal fats around the world

Brazil’s rendering association SINCOBESP estimated that 1.9 metric tons of animal fats were produced in Brazil in 2011 and were primarily used domestically. Around 42% was used for cleaning products/soap, 32% in animal feed, and 18% for biodiesel. Tallow in Brazil is mostly used for soaps (56%), biodiesel (25.6%) and animal feed (12.5%)

The Latin American rendering association, La Asociación Latino Americana de Plantas de Rendimiento (ALAPRE), reports that the rendering industry in Brazil consists of 512 registered plants under federal inspection with meat packers and recyclers comprising the largest segment. About 34% of the processors are independent processors, with 343 integrated to slaughterhouses. Biodiesel production focused on animal fat in Brazil is concentrated in four states: São Paulo, Mato Grosso, MatoGrosso do Sul, and Rondonia.

In Argentina, about 60% of the rendering industry is concentrated among five companies. In 2011, production of protein meals and animal fats reached 800,000 metric ton, according to ALAPRE.

Tallow exports to China, Australia’s largest market, were disrupted in 2012 as consumers found industrial tallow from Chinese food factories, the association said. In 2011, sales to Singapore expanded to almost 100,000 metric ton from a mere 35 metric ton in 2010 mostly due to demand from Neste Oil’s biodiesel plant. Demand from the Neste Oil plant, however, weakened at the end of 2011 as Neste Oil also sourced its tallow from North America and South America to round out supply and quality issues.

Australia is said to be looking to export tallow to the EU for biodiesel use, but EU authorities are concerned over Australian cattle being treated with growth hormones. Australian renderers are working with the EU government and are waiting for the market to open.

According to the US Department of Agriculture’s Foreign Agricultural Service report on Canada Biofuels published in June 2012, Canada’s share of biodiesel production using animal fats was expected to fall to 38% from 60% share in 2011 as new biodiesel plants started using other feedstocks primarily canola oil.

On top of this decline from the biodiesel sector, the Canadian Renderers Association (CRA) continues to face challenges with tallow export to China and grease theft.

Canadian tallow export to China has been open since mid-2012 but so far no product has been shipped due to a the presence of a box on the importation certificate that requires a Chinese import permit number, and according to renderers, China does not issue import permits.

The Chinese government’s concern is there is no control over the tallow once it arrives. China has closed its market to Canadian tallow for several years because of concern about mad cow disease