Wal-Mart Stores Inc. (Walmart; Bentonville, Arkansas, USA) has introduced a line of four “all-natural” household cleaning products under its Great Value private-label brand in 2,000 US stores. That brand, which debuted in 1993, includes hundreds of household consumer products. Is the company simply “greenwashing” or has it recognized that the technology behind the new formulation promises a big change in the green cleaning products arena? 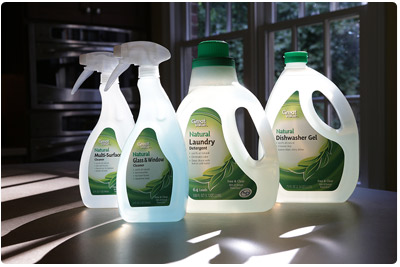 On the face of it, the November 2013 product introduction of “100% chemical-free” (in Walmart’s words) Great Value Naturals cleaning products seems straightforward: The company, which is by far the world’s largest retailer, has since 2009 been assessing companies and products along its supply chain using a 15-question Sustainability Index. In addition, Walmart is a founding member of the Sustainability Consortium (www.sustainabilityconsortium.org)—a worldwide coalition of participants from industry, government, and academia “that work collaboratively to build a scientific foundation that drives innovation to improve consumer product sustainability.”

Sustainability aside, there is profit to be had in the green category. Global spending on green cleaning products is expected to reach $9.3 billion in 2017 from an estimated $2.7 billion in 2012, according to Global Industry Analysts Inc. (GIA; San Jose, California, USA). That growth trajectory is still only a fraction of the relatively steady $150 billion market for all household cleaning products, GIA noted, but it is still an attractive niche market for manufacturers and retailers.

Who buys green products and why

The Shelton Group is a marketing communications agency based in Knoxville, Tennessee, USA. The company focuses entirely on energy efficiency and sustainability and conducts an annual Eco Pulse™ survey of US public opinion about green products and preferences. The 2013 report turned up a number of interesting facts that go a long way toward explaining the relatively slow growth of green consumer product sales.

The percentage of respondents searching for greener products climbed (from 59.9% in 2009 to 70.2% in 2012) and then leveled off (65.5% in 2013), Shelton says (see Table 1). “It is likely that we have simply reached the maximum potential market for green products,” the report notes. Demographically, the Shelton data show that minorities were more likely to be searching for greener products than were nonminorities (73% to 61%). Householders with children were also more likely to be searching than were householders without children (72% vs. 62%). Respondents 65 years old or older were the least likely age group to be searching (55% vs. 68% of those 64 and younger).

Shelton has also tracked increasing concern by consumers about the chemical content in a variety of nonfood products. This concern “varies by category and is generally vague and uninformed,” the report says. For example, although more than 50% of those polled claim to be searching for more natural alternatives within the personal care category, “only 18% say they are regularly buying them—and this number hasn’t changed in three years.” Even respondents who are worried about this issue are mostly unable to identify chemicals (from a list) that they feel they should be concerned about.

The Eco Pulse study found that the only product category for which there is a broad, mainstream awareness and concern about chemical content is household cleaners. “We think it is not just coincidence that this is also the category with the highest green product market penetration among consumer packaged goods,” the report’s authors write.

“Great Value Naturals cleaning products are made from plant-based, all-natural Evolve® cleaning technology and are sold exclusively at Walmart,” the company news release stated. “The products are 100% chemical-free [by which the company means “petrochemical-free”] and toxin-free, biodegradable, nonallergenic, and packaged in recycled materials.”

The products are priced below well-established brands such as Clorox Co.’s Green Works, the Method cleaning product line, or Ecover (which purchased Method in 2013). The Walmart line includes:

Evolve, according to Walmart, “is the first all-natural cleaning technology that is lab-tested to achieve results at levels of efficacy previously seen only through the use of petroleum-based cleaners, detergents, degreasers, and solvents.”

Benjamin Shell, CEO of Agaia, the Fort Lauderdale, Florida, USA-based company that developed the Evolve technology and has only been in business since 2011, remembers his approach to Walmart with both clarity and pleasure.

“We sent samples on a Friday in early 2012 and heard back from them the following Monday,” recalls Shell. Walmart is not alone in exhibiting enthusiasm about the performance of the Evolve technology. Shell reports that Agaia is in the process of picking up a number of major industrial cleaning clients that he is not at liberty to name and is licensing Evolve for private branding to a “growing list of Fortune 100 and 500 companies.” Agaia distributes its products in North, Central, and South America; Asia, and Europe; those products include a full range of industrial and institutional (I&I) cleaning and laundry solutions and will soon include consumer products.

On its website, Agaia suggests that its I&I products can reduce operating costs up to 30% through a reduction in labor costs as well as usage of water and electricity. The laundry detergent is effective at 110–120°F (43–49°C), Shell says; further, Evolve reduces rinsing by 60% or more, saving both water and electricity.

AOCS member Jeffrey Harwell, a professor at the University of Oklahoma, worked as a consultant to Benjamin Shell’s brother, Christopher Shell, a chemical and petroleum engineer by training, on the development of the Evolve technology. The brothers were introduced to Harwell through Candida West of the US Environmental Protection Agency, who had co-authored an article on surfactants and subsurface remediation with Harwell.

Although Harwell is bound by the terms of a nondisclosure agreement, he says that the Evolve technology “likely exhibits a significantly different cleaning mechanism than traditional cleaners and laundry detergents.” Benjamin Shell suggests that the mechanism involves hydrogen bonding rather than covalent chemistry.

As part of the development process, Harwell says he “threw out a crazy suggestion” concerning “a surprising formulation component” and also tweaked the pH of the formulation. “We had used the component as part of our work on surfactants in environmental remediation,” he added. “Ironically, we never actually employed it in that arena.”

Shell says that efficacy testing conducted by Phillips & Associates (Minneapolis, Minnesota, USA) has shown that the Evolve technology cleans better than petroleum-based formulations. In a commercial laundry setting, the base Evolve technology (Evolve 203L) remediated 100% of 14 of 16 different standard stains and 40–50% of the final two (lipstick and black shoe polish). Phillips has called it “the most powerful technology” the company had ever tested, according to Agaia.

The Material Safety Data Sheet (MSDS) on the Agaia website and the patent filing (US8455426, granted June 4, 2013) give some tantalizing clues about the new formulation, which is 100% renewable, including the use of essential oil-based fragrance rather than synthetic perfumes.

The patent describes a liquid cleaning composition containing alkyl polyglycoside (APG) surfactants, an alkylated vegetable oil, water, and a sodium-containing base. APG are nonionic surfactants derived from sugars and fatty alcohols; the MSDS for the undiluted formulation describes the product as being amphiphilic in its action. The MSDS also asserts that the formulation “contains no chemical, petroleum or synthetic ingredients or catalysts.” It is “manufactured from edible food stock oils where possible.” The composition is identified as being 72% “proprietary plant-based surfactants”; 8% palm, soy, coconut oils; 10% glucose/dextrose; 4% natural fatty acids; and 6% GRAS-exempt ingredients.

Industry observers have questioned the “all-natural” claim made by both Walmart and Agaia (having deemed the “chemical-free” claim as patently absurd). Agaia, for its part, points to the use of plant-based feedstock and catalysts in the production of the APG as the basis of its “all-natural” claim. Shell also noted that Agaia has relied on “a certification by Oklahoma University, who reviewed all ingredients and their MSDS, as well as manufacturing methods, to determine our all-natural claims.”

“The notion that you can perform a chemical reaction with so-called ‘natural’ ingredients and say that the resulting product is neither chemical nor synthetic is ridiculous,” said Warren Schmidt, a surfactant consultant based in Cincinnati, Ohio, USA, and a member of the Inform Editorial Advisory Committee. “Further, there is no such thing as a ‘natural fatty alcohol,’ as the alcohol is made by the catalytic hydrogenation of fatty methyl esters.”

This difference of opinion points to a fact of product marketing, whether of food or home/textile care: The word “natural” is, essentially, meaningless. In the United States, the Federal Trade Commission (FTC) is charged with administering consumer protection legislation in pursuit of free and fair competition in the marketplace. The FTC abandoned the effort to regulate “natural” claims as early as 1978, deciding instead to scrutinize claims “on a case-by-case basis” (Federal Register 48:23270, May 24, 1983). In 2010, the agency declined to define “natural” in its Proposed Revision to its Guides for the Use of Environmental Marketing Claims. FTC noted that no commenters had provided data on how consumers understand the use of the term and that “natural” conveys different meanings depending on the context. Likewise, the US Food and Drug Administration (FDA) has declined to define “natural” with respect to food, food ingredients, drugs, and cosmetics.

A number of class-action lawsuits have been filed challenging “natural” claims, where products contain synthetic ingredients such as dipropylene glycol, propylene glycol, triclosan, and tetrasodium ethylenediamine tetraacetic acid (in a “natural” deodorant—see Trewin v. Church & Dwight, Inc., filed in March 2012). The lawsuits have led to a renewed effort within industry to set third-party natural standards such as the Natural Products Association Home Care Standard, which was introduced in February 2010.

Benjamin Shell says Agaia plans to bring the Evolve brand to the retail consumer market eventually. Toward that end, Doug Meyer—former president/CEO of Burt’s Bees—has been hired to head the Agaia Home Division. “Lots of financial partners” are in the works for 2014, Shell says, adding that he plans to “continue to demonstrate to the world that there are all-natural solutions for removing toxic chemicals from the home.”