Fatty acids are an important feedstock for the chemical industry and are expected to increase in global worth at a rate of about 13.6% per year (from 2012) to $13 billion  by 2017. The growth in this market is due to several chemical and economic factors. Fatty acids are easily isolated from vegetable, algal, and fish oils as well as animal fats. They are biorenewable and environmentally safe, so their use allows the manufacture of “green” products that are desired by consumers. Fatty acids are also rich in carbon and hydrogen, and for the most part they contain only two oxygen atoms per fatty acid. These traits make them very stable and unreactive, which is important for commercial products, such as engine oils and lubricants, that are placed under harsh conditions.

Currently and historically, the chemical industry has used petroleum feedstocks to produce everything from oils to paints to pharmaceuticals. Because the price of crude oil has gone up by a factor of 10 in the last 15 years, the price of petroleum feedstocks has also increased. This cost increase has made it financially attractive for the chemical industry to use inexpensive, plentiful, biorenewable feedstocks such as fatty acids.

Fatty acids have very similar chemical and physical properties, which make separating them a challenge. Current methods to separate fatty acids on an industrial scale, which are decades old, can separate fatty acids to reach purities of an individual fatty acid of 80% and, in some instances, up to 90%. The costs associated with these purifications increase with increasing purity, and there are significant limits on what purities can be reached at a reasonable cost.

Separations based on membranes are an exciting new method that can potentially change how fatty acids are purified and what purities are economically possible to reach. Membrane separations are well integrated into the chemical industry and are generally viewed as an attractive purification method. The best membrane purifications can be completed at room temperature or slightly above, do not require additional solvent, and use pressures up to 1,000 pounds per square inch (7 megapascals). They are typically a very low-cost way to purify molecules. As an example, a common use of membranes on a large scale is spiral-wound reverse osmosis membranes that purify water by removal of salt or other unwanted impurities.

Before 2013, no membrane that could separate and purify fatty acids was known. This is not surprising since fatty acids possess nearly identical molecular weights and small sizes that make separating them with a membrane very challenging. Most membranes separate molecules based on their different sizes, similarly to how a coffee filter retains large coffee grinds but allows water to pass through. Unfortunately, not only are the sizes of fatty acids similar to one another, but the size of each fatty acid is constantly changing due to bond rotations (Fig. 1). 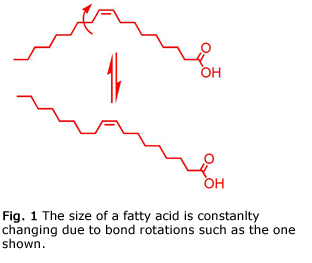 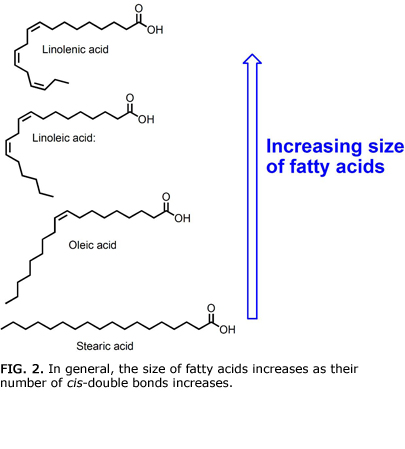 The membranes developed by Bowden’s group can be tuned to selectively retain fatty acids (Fig. 3). For instance, a mixture of 64% linoleic acid, 24% oleic acid, and 12% saturated acids was added to a separation vessel with one membrane. After pressurization at 150 psi, the linoleic acid was selectively retained and constituted 90% of the retentate. After passing the retentate through a second membrane having identical composition, a stream that was enriched in linoleic acid (>97% purity) and a stream enriched in oleic acid (94% purity) were isolated. These separations show that linoleic acid could be rapidly separated from oleic acid and saturated acids. 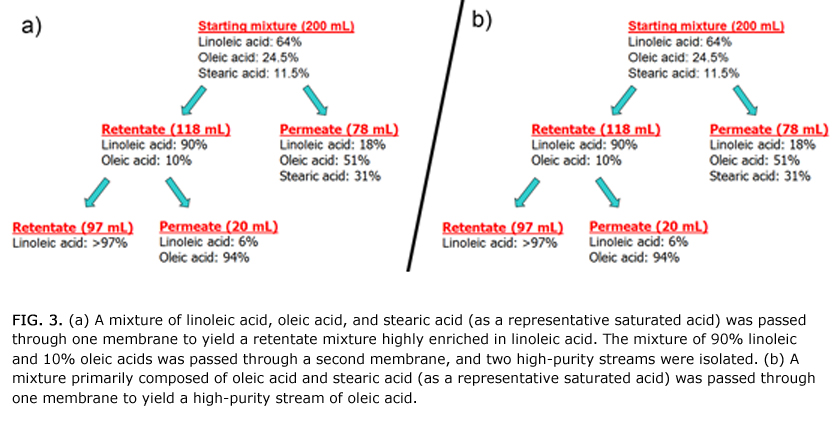 In a different series of experiments it was shown that oleic acid could be separated from stearic acid (Fig. 3b). In this case, a mixture of 2% linoleic/linolenic acids, 72% oleic acid, and 26% saturated acids was added to a separation vessel with a membrane designed to retain oleic acid. After pressurizing, the retentate was highly enriched in oleic acid (97% pure) and the permeate was enriched in saturated acids. In fact, oleic acid from inexpensive feedstocks could be purified to >99% using these membranes.

In addition to separating and purifying mixtures of fatty acids, we were able to separate and purify mixtures of methyl esters of fatty acids. The membranes separate molecules based on their sizes, which are determined largely by the number and location of the cis-double bonds rather than whether an acid or ester is present. The separations of mixtures of the common fatty acids found in vegetable oils (stearic, oleic, linoleic, and linolenic acids) was similar regardless of whether fatty acids or the esters were used.

This work was extended to the purification of eicosapentaenoic acid ethyl ester (EPA-EE) and docosahexaenoic acid ethyl ester (DHA-EE). These omega-3 fatty acid esters originate from fish and are sold as health supplements worldwide. Fish oil typically contains only 30% EPA and DHA in the form of triglycerides; to purify EPA and DHA, one must convert them into ethyl esters. Because EPA (C20 and five cis-double bonds) and DHA (C22 and six cis-double bonds) have high molecular weights and high degrees of unsaturation, they are challenging to purify. The membranes that we developed can quickly and easily separate the saturated, monounsaturated, and other polyunsaturated fatty acid esters from EPA-EE and DHA-EE. In addition, these membranes can separate EPA-EE from DHA-EE. For example, in one experiment a mixture of 39% EPA-EE and 40% DHA-EE was passed through a membrane. The retentate had a composition of 17% EPA-EE and 62% DHA-EE, and the permeate had a composition of 52% EPA-EE and 24% DHA-EE. Further passes through membranes allowed the purification of both EPA-EE and DHA-EE to >90% purities.

Many aspects of these separations indicate that they will be successful when applied on an industrial level. The flux of these experiments was typically 10–50 L m-2 h-1 despite little optimization. The separations can be completed at room temperature or slightly elevated temperatures, and only a few passes through a membrane are needed to reach high purities (>90%). Mild pressures of 150 psi were used for many experiments, so the pressure can be increased to accelerate the flux through these membranes. These separations have been applied on less than 1 kilogram size scales so far, but Pure Oleochemicals is working to scale these separations to be appropriate for industrial applications.

Membrane-based separations compare favorably to the current methods used to separate fatty acids, including distillation, winterization, and urea clathration. Distillation requires large amounts of energy due to the high boiling points of the fatty acids. Winterization involves the addition of a solvent and cooling to precipitate the high-melting-point fatty acids. After filtration, the solvent must be removed and recycled. To increase the effectiveness of winterization an additive such as urea can be added, but this additive must also be removed at the completion of the separation. These technologies are mature and been used for several decades, but there are limits to the purities of fatty acids that can be produced at economically viable prices. The use of membranes is a radically new purification method that will open up new opportunities to complete current purifications for a lower cost, to solve purification challenges that are not possible with current technologies, and to produce high purity fatty acids for a low cost.

Ned Bowden is a professor of chemistry at the University of Iowa and the CEO of Pure Oleochemicals. He can be reached at nedbowden@gmail.com.