We live in an information-driven society deluged by advances in wireless communications, the Internet and integrated computer networks, and various other technologies. When compared to previous generations, we are spoiled by the way information has become available at the push of a button or click of a mouse. Gone are the days of using a card catalog or Chemical Abstracts to search for scientific literature (or even of setting foot into a library), as it is quicker and easier to get the information we need through e-journals and web resources such as SciFinder and Web of Knowledge.

We are just as impatient for chemical information. Identifying unknown species and determining physical properties, quantities, and specific interactions of target analytes is essential for many fields of science, so it is not surprising that the pursuit of higher-performing chemical instrumentation and associated methods that allow chemical information to be acquired “on demand” drives the fields of analytical chemistry and engineering. Realistically, however, the speed of chemical analysis is typically limited by sample preparation time and the throughput of the chemical instrumentation that is used. Following are some strategies that are being used to overcome these limitations.

One of the greatest increases in sample throughput could come from reducing or eliminating the time and resources required to transport samples from the field to the analytical laboratory, a necessity for most instrumentation classes that can add minutes to several days to an overall analysis, depending on the target of the study. As previously discussed (inform 20: 625–627, 676, 2009), mass spectrometry (MS) is highly amenable to miniaturization, allowing analysts to take portable MS systems into the field. This effectively brings the chemistry lab to the sample and eliminates sample shipment/transport.

One of the most mature categories of portable MS systems are those that use gas chromatographic separation (GC/MS), brought on by the need for rapid, on-site analysis of volatile and semivolatile species important to human health, homeland security, and environmental monitoring. Several rugged instruments are commercially available. Torion Technologies, Inc. (Tridion-9) and Smiths Detection (Guardion) both offer suitcase-style GC/MS systems that use solid-phase microextraction (SPME) fibers for sample introduction and low thermal mass GC assemblies to expedite chromatographic separation. Flir Systems, Inc. has developed the Griffin 460, one of the most versatile portable GC/MS products available, which allows sample introduction via direct syringe injection, direct air sampling, purge-and-trap and headspace methods, and SPME. The Griffin 460 is also compatible with Flir’s portable, sorbent tube air sampler, the X-Sorber. These handheld devices allow both time- and volume-based collection in harsh environments, record both operator and sample information to preserve chain of custody, and store sample location via an on-board global-positioning system. Analysis of volatile species without the need for GC separation has also been demonstrated, as is the case for the 1st Detect MMS-1000, which uses selective membrane introduction, and the Syft Technologies Ltd. Voice 200, which uses mass-selected reagent ions to ionize and detect target species and is robust to high-moisture samples.

Miniaturized systems have also been developed to target semi- and nonvolatile species, using ionization methods such as electrospray ionization (ESI) and atmospheric pressure chemical ionization (APCI). ESI and APCI, which produce ions at atmospheric pressure, offer a significant engineering challenge to instrument development because of the need to sample externally generated ions with reduced-size vacuum systems. There are fewer commercial instruments of this type, but those that are available offer high performance and flexibility in application despite their small form factor. The Advion, Inc. expression is a compact quadrupole MS system that has been designed specifically for use in fume hoods and can be coupled to high-performance (HPLC) and ultra-high performance liquid chromatography separation through both ESI and APCI ionization sources. Microsaic Systems offers one of the smallest footprint ESI-capable MS systems available. The Microsaic 3500 MiD, as seen in Figure 1, utilizes “plug and play” chip-based components produced via microelectromechanical systems fabrication techniques, reducing the size of the ionization source, vacuum interface, and quadrupole mass analyzer. While applicable as a detector for HPLC, this system has also been implemented in continuous reaction monitoring by coupling to flow chemistry systems, allowing the observation of reaction intermediates and competing synthetic pathways of benzyne synthesis via diazotization (Browne et al., 2012).

Portable MS systems that are coupled to GC and LC separation have revolutionized many analyses once confined to the laboratory, but they still require extensive sample preparation due to the constraints of chromatography, thus increasing total analysis time. To combat the need for sample preparation, several portable MS platforms have been developed to allow coupling to ambient ionization methods (ambient MS), negating the need for chromatographic separation. Ambient MS methods, as recently reviewed (Huang et al., 2011), use a variety of different mechanisms to desorb and/or ionize target analytes directly from samples of interest, including complex matrices such as biological fluids, foodstuffs, cosmetic and pharmaceutical formulations, and tissue cross-sections.

The research groups of R. Graham Cooks and Zheng Ouyang at Purdue University have pioneered the development of portable MS systems capable of ambient ionization methods (Xu et al., 2010), and a ruggedized commercial product offering similar capability, the Flir Systems Atmospheric Inlet MS (AIMS), is now available. The systems from Cooks and coworkers and Flir Systems have been extensively applied to desorption electrospray ionization (DESI) for analyte ion generation, a well-established ambient method that uses a pneumatically assisted electrospray to desorb neutral analyte from samples of interest as secondary ions that are detected via MS.

Coupling DESI to high-performance portable MS systems offers intriguing capabilities, particularly in trace surface analysis. Figure 2 shows a negative-ion DESI mass spectrum acquired from trace residues of ascorbic, linolenic, and erucic acids with the Flir Systems AIMS. Even at low deposited amounts (165 ng each), each analyte is seen with high sensitivity and selectivity due to MS/MS capability. Detection limits in the low- to sub-nanogram range are commonly obtained on these systems. 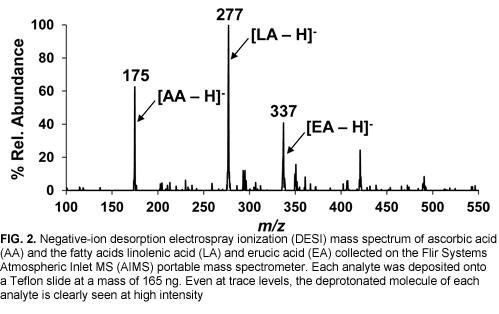 The maturation of portable MS systems capable of ambient ionization could not come at a better time, as we are arguably in the golden age of MS ionization method development. In a recent review by Weston (2010), 29 different ambient MS methods appeared in the literature between 2004 and 2009, and novel ways to analyze samples directly continue to be developed. Although not every ambient MS method can be coupled to portable instrumentation, several have been demonstrated or hold high promise for implementation. For instance, García-Reyes and co-workers (2009) used low temperature plasma probe—a plasma-based method that uses energetic particles created from a discharge gas such as helium to desorb/ionize analyte—for quality assessment of raw olive oil samples. Besides potential adulterants, free fatty acids, phenolics, and associated volatile species were all readily detected with this method. Eberlin and coworkers (Alberici et al., 2009) developed easy ambient sonic-spray ionization (EASI), which is solvent-based like DESI but creates charged droplets purely through high-pressure nebulizing gases rather than voltage assistance. By using EASI-MS, direct characterization of main soybean biodiesel components was accomplished, including free fatty acids and triglycerides, depending on the quality of the fuel.

Work continues toward broadening the applicability and simplifying the design of ambient MS methods. One of the simplest ambient MS methods reported is paper spray ionization, as depicted in Figure 3a. Paper spray MS allows generation of gas-phase analyte ions of samples deposited onto chromatographic paper that has been pre-cut into triangles. After application of a small aliquot of solvent to the paper and high voltage via a spring clip electrical connection (e.g., an alligator clip), pre-loaded analytes migrate through the paper to the tip, where they are ionized via localized electrospray and field ionization mechanisms. While a paper spray ionization source can be assembled from general consumables found in most labs, it has proven to be highly useful, particularly for therapeutic drug monitoring from whole blood spots (Espy et al., 2012) and contaminant analysis from foodstuffs such as meat, powdered spices, and milk (Zhang et al., 2012). Interestingly, it seems that in the case of plant tissues, one can bypass the use of chromatographic paper by substituting in a triangular section of the tissue itself, a technique denoted as leaf spray MS. As seen in Figure 3b, it is operationally similar to paper spray MS. A recent report shows that leaf spray MS can be used to screen pesticide residues directly from the peel and pulp of fruits and vegetables, including independent analysis of the flavedo and albedo components of orange peel (Malaj et al., 2012). 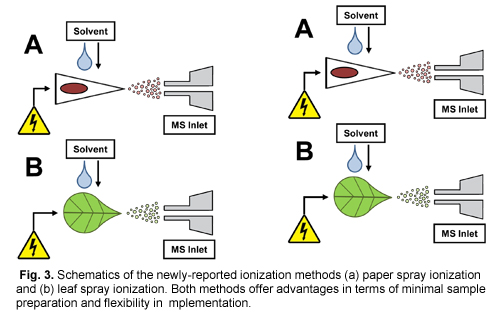 The combination of ambient ionization methods with portable MS technologies offers great potential in chemical analysis, and researchers from various fields of science are already taking advantage of the enhanced throughput and negligible preparation requirements. Portable MS systems continue to be produced with smaller form factor and higher performance, but due to the restrictive nature of critical instrumental components, size reduction may never reach the point where we each have our own personal mass spectrometer. Then again, that’s what “they” said about the computer. . . .

Christopher C. Mulligan is an assistant professor of analytical chemistry at Illinois State University (Normal, Illinois, USA), where his research involves the design and application of portable MS instrumentation with specific interest in method development for homeland and travel security, food safety, forensic science, and environmental monitoring. He is currently developing portable MS systems for use in crime scene investigation with the help of funding from the US National Institute of Justice. Mulligan can be contacted at mulligan@ilstu.edu.

Kyle E. Vircks is an M.S. candidate in the Department of Chemistry at Illinois State University (Normal, IL). His current research in the Mulligan lab involves the utilization of portable instrumentation and ambient mass spectrometry in forensic science. His specific areas of interest in forensic science include drug chemistry and fire debris analysis.