Surfactants and detergents are major commodities employed within several industries, including pharmaceuticals, personal care products, cleaners, laundry detergents, paints and coatings, foods, lubrication, and mining. In 2010, the worldwide market for surfactants reached $24.3 billion, and 10 million metric tons were produced. Unlike soaps and detergents produced before the early 1900s, most of which were made with animal fats or vegetable oils, surfactants produced during the past 100 years have become increasingly dependent on petroleum. More recently, concerns about the long-term economic and ecological sustainability of fossil fuels have led to renewed interest in biobased feedstocks.

The biobased resource most often used to make surfactants is the fatty acyl group derived from seed oils, which are becoming more readily available to manufacturers due to the growth of biodiesel, which provides an abundant and consistent supply of fatty acid methyl esters as chemical intermediates. The hydrophilic moiety of surfactants can also be derived from renewables that readily occur in a biorefinery operation, such as sugars, glycerol (a low-value co-product derived from biodiesel), amino acids, and their derivatives. Other biorefinery-derived chemicals, such as phospholipids, sterols, and glycols, can also be used as source materials.

Surfactants are traditionally manufactured using chemical processes that consume large quantities of energy, such as temperatures that exceed 100°C, involve high acidity or alkalinity, and/or use organic solvents. Bioprocessing approaches, particularly replacing chemical processes with those that use enzymes, are receiving attention as examples of “green manufacturing” that can lead to an enhanced sustainability profile (Table 1). 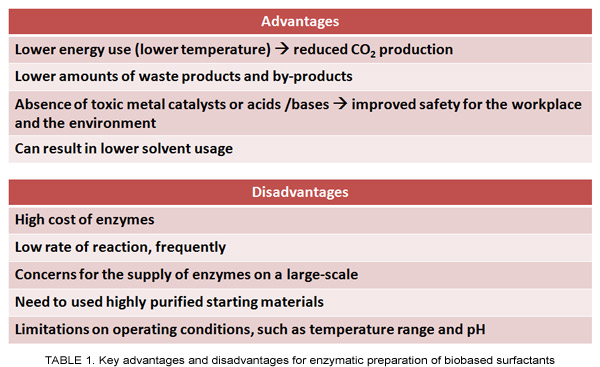 Moreover, enzymatic processes proceed at lower temperatures and in the absence of highly acidic or alkaline conditions, leading to improved process safety and reduced production of CO2 and other “greenhouse gases.” Milder operating temperatures also reduce unwanted side reactions involving labile groups, such as the degradation of double bonds that occur in unsaturated fatty acyl groups. Replacing metallic or acid/base catalysts with biocatalysts reduces the release of heavy metals and other potentially harmful chemicals to the environment as well as their occurrence in the final product. Furthermore, owing to the high selectivity of enzymes (e.g., the preference of enzymes for specific functional groups, or regioselectivity, of a starting material), the product distribution is frequently narrowed compared to chemical syntheses. For many enzymatic processes involving two or more starting materials, stoichiometric proportions of these substrates can be employed, leading to reduced amounts of unused substrates in the final product, hence to a reduced burden for downstream purification.

The advantages of enzymatic processes must be weighed against several inherent disadvantages, the most significant of which include the relatively high cost of enzymes, a frequently lower rate of reaction, and uncertainty of a consistent supply (Table 1). Other disadvantages include the susceptibility of enzymes to inhibition by minor components that occur in oleochemicals, such as peroxides, aldehydes, ketones, and heavy metals. These disadvantages deter the current use of enzymatic processes, as they require prepurification processes and create operational limitations, such as temperatures below 100°C to avoid enzyme denaturation. Scientific progress may change this trend. For example, developments in enzyme immobilization technology, recombinant DNA technology, and discovery of extremophiles are yielding more active and stable enzyme preparations, making it possible to increase their operational lifetime. Such developments will make enzymatic bioprocessing increasingly attractive for high-value specialty surfactants, such as structured phospholipids for use in lung surfactant preparations and drug delivery vehicles, and fatty acid ester-based surfactants in nutraceuticals and pharmaceuticals.

The molecular structures of biobased surfactants prepared using enzymes are depicted in Figure 1, while the enzymes used to prepare them are listed in Table 2. 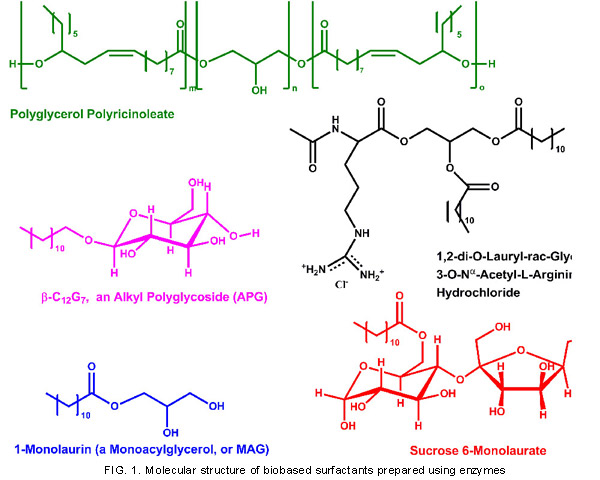 The enzymes most commonly used for biobased surfactant synthesis—lipases—catalyze the formation of ester bonds between fatty acyl groups and polyhydric alcohols, or polyols, to prepare several biocompatible and biodegradable nonionic surfactants for use in foods, cosmetics, pharmaceuticals, and personal care products. Examples include sugar or sugar alcohol esters, monoacylglycerols (MAG), fatty acid ethoxylates, and polyglycerol polyricinoleate. The development of several commercial lipases in free and immobilized form that are highly thermophilic and possess good catalytic activity has accelerated interest in and performance of these reactions. Lipase-catalyzed formation of ester bonds requires nearly anhydrous reaction media to prevent the hydrolysis of ester bonds. Lipases are typically employed as a dispersed solid that is suspended in the reaction medium or else placed within a packed column, with the reaction medium transported through the column using low-pressure pumping to allow for their recovery and reuse.

Most lipases possess regioselectivity, thereby limiting the number of hydroxyl groups of polyols that can serve as acyl acceptors. For example, in Figure 1, lipase-catalyzed esterification of fatty acid and sucrose occurs mainly at the primary hydroxyl of the glucose monomeric unit of sucrose, that is, the 6 position. Therefore, lipase-catalyzed reactions often result in a narrower product distribution than chemical catalytic approaches.

Lipase-catalyzed synthesis of polyol-fatty acid esters is hindered by the poor miscibility of the lipophilic fatty acyl group and the hydrophilic polyol, leading to poor mass transfer and hence low reaction rates. Several approaches have been taken to address this deficiency, such as using polar organic solvents or ionic liquids and derivatizing or complexing the hydroxyl groups of the polyols to achieve cosolubilization. Alternatively, the use of small amounts of polar solvent as adjuvant has been successful. Adjuvants solubilize sufficient amounts of substrate to enable esterification to occur, but at low overall amounts and lower temperatures to promote precipitation of monoester upon its formation. Another approach to minimizing the use of solvent is to suspend particles of polyol immobilized onto a solid support, or in case of saccharides crystals of acyl acceptor directly, in solvent-free reaction medium. The fatty acyl substrate/ester product mixture serves as solvent, with the capacity for suspended particles increasing with time resulting from the formation of biobased surfactant. The author of this article has used this approach to prepare mono- and disaccharide–fatty acid esters under solvent-free conditions at 65°C, achieving 85–95% yields and requiring a minimal level of further purification. Lipases can also form biobased surfactants via hydrolysis; for example, lysophospholipids are readily formed via lipolysis of phospholipids, yielding a surfactant frequently possessing a higher HLB [hydrophilic lipophilic balance] value, lower surface and interfacial tension, and decreased sensitivity to pH than its parent. MAG are readily formed during lipolysis of triacylglycerols using 1,3-positional selective lipases in systems enriched in calcium, leading to irreversible soap formation for the released free fatty acids. Lipases can also form amide bonds between a hydrophile and a lipophile. Examples reported in the literature include N-acylated derivatives of ethanolamine and N-methyl glucamine.

Lipases and proteases (e.g., papain) have been used to prepare amino acid surfactants. Most of the successful biotransformations occur using the carboxylate moiety of amino acids as acyl donor. Either ester or amide bonds are then formed using fatty amines or fatty alcohols as cosubstrate, respectively. The amino acid substrates are typically acylated (protected) at their α-amino group using acetate or carboxybenzyl (Cbz) groups. Amino acid surfactants have been prepared enzymatically using arginine, aspartate, (Cbz-S-derivatized) cysteine, glycine, phenylalanine, serine, and tyrosine. The only successful enzymatic conversions of free amino acids have been the esterification of the ε-OH group of homoserine and amide bond formation at the ε-amino group of lysine, using several different acyl donors.

One example of an arginine-based amino acid surfactant is given in Figure 1. The surfactant was synthesized in a two-step process. First, the Nα-acetylated amino acid hydrochloride was esterified with glycerol using either lipase or papain. Subsequently, the product from the first step was reacted with two mole equivalents of lauric acid, leading to ester bond formation at the two free hydroxyls of the glycerol moiety. Amino acid surfactants are very effective emulsifiers that have been used frequently in cosmetics and personal care products. Arginine-based surfactants have excellent antimicrobial activity and biodegradability.

Alkyl glycosides and polyglycosides (AG and APG, respectively) have also been synthesized enzymatically. Glycosidases catalyze the formation of acetal bonds between monosaccharides and fatty alcohols in low-water medium, yielding a mixture of α- and β-pyranoside isomers. When lactose, a disaccharide, was used as glycosyl donor in the presence of 1-hexanol, hexyl galactoside and glucoside were formed, owing to the enzymatic hydrolysis of the β-1,4 glycosidic bond occurring between the monosaccharide units of lactose. A recent report demonstrated the ability of cyclodextrin glycosyl transferase from Bacillus macerans to form APG, to transform dodecyl-β-D-maltoside (C12αG2) into C12αG7 using α-cyclodextrin as glycosyl donor, with the latter present at an eightfold molar excess. The conversion was 50%. Although not competitive with chemical synthetic approaches, these recent results suggest the potential ability to enzymatically produce AG and APG under mild conditions with further technological development.

Other examples of enzymatic synthesis include the ability of phospholipases to tailor-make “structured” phospholipids through selection of the fatty acyl group (via phospholipases A1 and A2, or lipases) and head group attached to phosphatidic acid via phospholipase D-catalyzed transphosphatidylation, including novel, nonnatural head groups. In addition to employing enzymes, microorganisms frequently have been used to form biobased surfactants (referred to as biosurfactants) such as rhamnolipids, sophorolipids, mannosylerythritol lipids, trehalose lipids, and liposaccharides. The latter topic is beyond the scope of this short review.

Although not yet cost competitive with chemical synthetic approaches, enzyme-catalyzed syntheses possess many intriguing advantages as green-manufacturing approaches to prepare biobased surfactants, including milder and less energy-intensive processing conditions and the reduction of by-products that can harm the environment or the user of the product. Further development of more active and stable biocatalysts, and new bioprocessing technology, will improve the viability of this approach.