The power of mass spectrometry in the detection of fraud

Fraudulent products cost industry billions of dollars each year. Perfumes are a good example. Figure 1 shows two look-alike products.
The original product  on the right, was purchased from Douglas, a high-street retailer in Prague, Czechoslovakia. The look-alike copy on the left was purchased from a Vietnamese merchant in the same city. The price for the 90-mL look-alike was equivalent to $7.70, whereas the 30-mL original J’Adore perfume made by Christian Dior and purchased from Douglas cost $72.80—an almost 30-fold price difference. To the untrained nose, the scents were very similar, showing the expert knowledge the producers of fraudulent products have acquired in composing products with very similar fragrances and appearances. 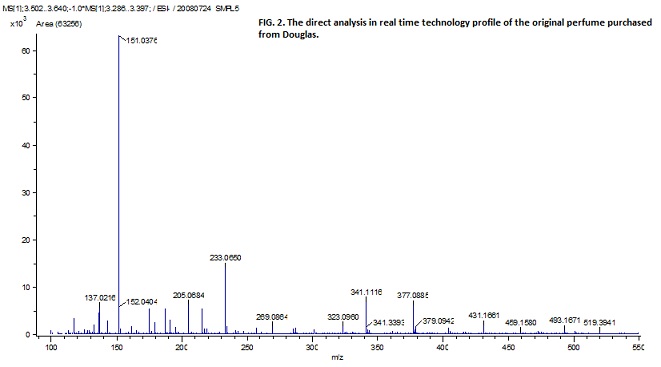 However, several reproducible peaks were identified that allowed us to clearly distinguish between the fraudulent product and the high-street product. 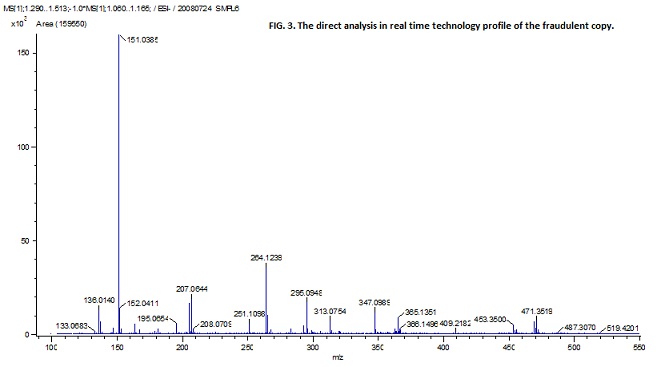 In the textile and fragrances industries, look-alike products are usually a straightforward copy—good or poor—of the original (jeans, T-shirts, handbags, etc.), but the palette of fraud options in the food industry is much wider. Straightforward replacement with lower-quality products or faked labels is just one option. There is also the often-favored option of blending, which is more difficult to detect. 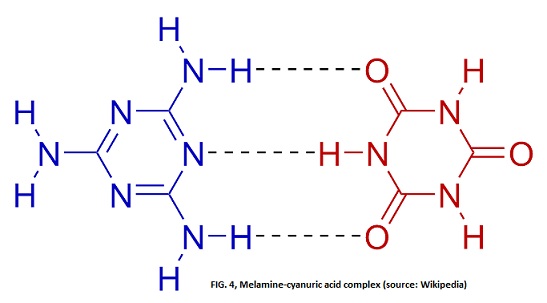 The fraud industry is extremely inventive: If the makers of fraudulent products know what analysts look for to detect a fraud, they can specifically add an identical or seemingly identical component but leave the remaining, lower-quality components portion unchanged. One blunt and lethal attempt at fraud was the addition of melamine to infant formula to mimic a high protein content (see who.int/csr/don/2008_09_22/en/index.html). A very simple and commonly used method for determining protein content is a Kjeldahl analysis, in which the total reduced nitrogen content is determined. Since the fraudsters knew this, they added melamine, a small molecule with very high nitrogen content, to the formula. In Kjeldahl analysis of the formula, the trace levels of melamine led analysts to believe that the products had a very high protein content, and therefore a high nutritional value. Unfortunately, the melamine was contaminated with cyanuric acid, which forms a complex (Fig. 4) and precipitates as lethal crystalline spicules in the kidney, killing some animals and humans. Unlike in the textile industry, where the use of products does not tend to have a negative health impact, fraud in the food industry can cost lives.

In this case, novel technologies help to identify and prevent fraud. Tandem mass spectrometry (MS/MS) is one of the common modern detection systems used for the analysis of melamine and cyanuric acid. MS/MS looks at not only the individual composition of a molecule but also its total mass and charge, thereby helping to identify the actual substance. The use of (forbidden) pesticides or veterinary drugs can also easily be detected if reference materials are available, as it is the case for most of them.

Another area of application of this technology is in premium products that, as in the textile industry, are often copied or blended with lower-quality materials. One example is single malt whisky. Here, some producers of the water of life (from the Gaelic uisge beatha or iskie bae, commonly known as whisky/whiskey) tend to use sugar profiles to characterize the brand and quality of the whisky. These can either be naturally occurring profiles in the grains used for distilling or intentionally added as markers. By using these profiles, an MS analysis can identify not only a replacement product but also a blending of lower-quality whisky with the original product. This is possible because the MS analysis also has the option to quantify the analytical target, in this case the sugar molecules. For this, standards of known concentration—typically isotopic versions of the target molecule that cause a slight shift in mass but have otherwise identical properties—are added that allow the quantity of the analyte in the unknown sample to be determined. An alternative method for quantification is standard addition, which requires measuring the same sample twice: once without the added standard, and once with it. The amount of target can be determined by calculating the difference between the two.

In the category of premium oils, if it is suspected that extra virgin olive oil has been adulterated with hazelnut oil, principal component analysis (PCA) can be used to identify blends of olive and hazelnut oil. With gas chromatography–MS, for example, principal components of hazelnut oil and of olive oils are identified and compared with the unknown sample. The PCA approach tends to be more reliable than just looking at one or two individual components, as some individual components can change with weather, storage, and processing conditions. However, when using the PCA approach, it is important that all possible aspects be covered by analyzing samples from different harvesting periods, storage, and processing conditions against a reference in order to include the variability aspect in the profile.

MS analysis does not stop at small molecules. More recently, food protein analysis has become a new playground for mass spectrometrists. To give just one example of where MS can be used for protein analysis, some ethnic groups reject eating either pork or beef products. And while in many cases polymerase chain reaction (PCR) is a good tool for identifying the species from which the meat originated, it fails in others. One example is in hydrolyzed protein from pigs or cattle, which is sometimes injected into chicken breasts to increase their weight through the retention of water. Here, DNA is often completely destroyed. The proteins are degraded and may no longer be detected by enzyme-linked immunosorbent assay (ELISA), while large quantities of smaller peptides are still present. The latter can still be detected by MS, making it possible to differentiate products based on what is suitable for a specific ethnic group. A similar situation exists for allergens in processed products, where PCR is unable to detect egg and even ELISA fails to detect large quantities of the proteins present, whereas MS easily detects the target peptides (Table 1).

MS is an excellent technology for identifying fraud when the fraudulent action relates to a change of composition of the product, that is, a replacement, blend, or addition. Other technologies may aid this, such as Site-specific Natural Isotope Fractionation (SNIF), a technology that allows the geographic origin of a product to be determined. However, as fraud gets more sophisticated, methods must be developed further. Initial approaches are underway to give MS the ability to detect unknown compounds: the so-called nontarget analysis. This, however, requires that the original product with all of its (biological) variability be available—an immense challenge with respect to computer power and storage, since each analysis generates tens to hundreds of gigabytes of data that need to be compared and evaluated. The current rate of storage capacity and computing power will not be a significant bottleneck for the future, making MS one of the most powerful technologies for the detection of fraud.

Counterfeit perfumes are big business. During 2011, US Customs and Border Protection (CBP) officials seized a total of $51 million worth of them. The most frequently intercepted fake was counterfeit Sex in the City perfume related to the highly popular HBO movie and television series.

CBP had targeted 138 commercial shipments of perfumes for possible trademark infringement, and 52 shipments were seized for infringing a trademark, including the one for Sex in the City. The domestic value of the seized shipments, which contained more than one million pieces, was nearly $8 million. If the trademark had been genuine, the manufacturer’s suggested retail price of the perfume would have been more than $45 million.

In the past year, the CPB uncovered more than 30 entities involved in the importation of counterfeit perfume. During that same time, 24,792 seizures of counterfeit and pirated goods with a total domestic value of $178.9 million and a manufacturer’s suggested retail price of $1.1 billion were intercepted before entering the United States.