Oilseeds of the future: Part 1

"Better food starts with better seed," Monsanto Co. suggests in a promotional booklet. Monsanto is not alone in this thought: Seed breeders the world over are working to modify oilseeds to improve the nutritional value of their oils and to provide better functionality for food formulation applications. To find out about some of the modified oilseeds working their way through the research and development pipeline, inform recently solicited information from a variety of companies and research institutions via an e-mailed questionnaire.

The responses-which will be printed in three parts in May (canola/rapeseed/mustard), June (cottonseed and flax), and July (safflower, soy, and sunflowerseed)-are by no means exhaustive. Some institutions or companies declined to participate (for example, the Donald Danforth Plant Science Center and Syngenta AG). Others are conducting modification work dealing only with industrial oils or agronomic traits.

Nonetheless, a number of researchers did participate. Here-primarily in their own words-is the latest information about a variety of breeding programs being conducted around the world.

When: Field-testing of advanced strains is occurring now. Seed is expected to be available in two to three years (including seed scale-up) for industrial applications and five years for food uses. 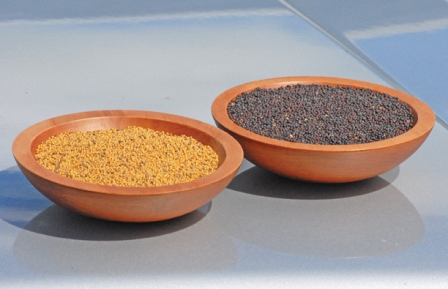 Samples: Samples are expected to be available in two years.

Higher plants do not produce these healthful fatty acids, but a number of other organisms such as algae, fungi, and mosses do. Genes from such organisms were identified, characterized, and transferred into canola by genetic transformation. After an extensive selection process, the best combination was taken forward into development. Plants with commercial levels of ARA, EPA, and EPA/DHA in the canola oil have been identified and are currently being developed into commercial products.

How: Genetic modification (genes for the synthesis pathways are transferred into oil crops).

Benefits: The BASF EPA/DHA canola oil product will deliver a similar percentage of EPA and DHA as traditional marine oils, typically certain types of fish oil. Health benefits for the consumer include reduced risks for cardiovascular diseases, certain neurodegenerative diseases, inflammatory diseases, and cancers-backed by scientifically proven health claims. An additional consumer benefit will be the convenience of use through the ability to increase intake of EPA/DHA in a form that is more readily available and assimilated into today's diets.

When: Commercial levels of ARA and EPA have been obtained in canola oil. Performance field tests have been completed, further and extensive agronomic and yield trials are actively ongoing in a number of potential geographic growing regions. Commencement of commercial production is envisaged sometime within the next five to seven years.

Samples: Samples of oil will be available for further testing and evaluation within the next 12 to 24 months.

How: Genetic modification: Food Futures National Research Flagship researchers have taken key LC-PUFA genes from marine microalgae, a form of lower plant, and transferred them to land plants. "In a world first, the team was able to demonstrate synthesis of the key nutritionally active omega-3 LC-PUFA, EPA and DHA, in the seed oil of the model oilseed plant Arabidopsis thaliana," CSIRO's Surinder Singh explains. Following this key breakthrough, the team has been working to transfer an optimized group of microalgal omega-3 LC-PUFA encoding genes into canola and cotton.

Canola or cottonseed oil containing EPA and DHA can revolutionize the ability of agrifood industries to deliver the nutritional benefits of LC-PUFA. For example, this type of oil can be used directly to produce omega-3-enriched margarines, fish and animal feeds, as an ingredient in other processed foods, as a nutritional supplement (such as in infant formula), and in specialized nutraceutical applications and will go a long way in meeting the projected worldwide increase in demand for omega-3 LC-PUFA.

When: The technology has progressed beyond proof-of-concept stage. Commercial production of omega-3 LC-PUFA canola and/or cottonseed is targeted to begin in 2015.

Samples: Samples are not available currently. No date has been set for their availability.

What: High-nervonic acid Ethiopian mustard (Brassica carinata): The proportion of nervonic acid (24:1Δ15) has been raised from 2% in WT (nontransformed wild type) to 45% in the transgenic lines containing a proprietary KCS (3-Ketoacyl-CoA Synthase) gene.

When: Stable fourth-generation (T4) transgenic lines were tested under confined field trials near Saskatoon in the summers of 2007 and 2008. Limited quantities of seed are available for planting now; another confined transgenic field trail is planned for this year. Scale-up will follow in 2010.

Benefits: There is an increasing interest in the production of high-nervonic acid oils for pharmaceutical and nutraceutical applications. Such oils have value for symptomatic treatment of neurodegenerative diseases involving sphingomyelin impairment (e.g., multiple sclerosis, Parkinson's disease) and as supplements in infant formula and baby foods.

Samples: Although small samples have been made available to some commercial labs and university research programs, there is still a need to assess the safety of the high-nervonic acid oil for routine human and animal consumption. The researchers anticipate the new oil will be available for use by the pharmaceutical/ nutraceutical/ nutritional supplement industries within five years.

How: Genetic modification (using a gene from Arabidopsis thaliana).

When: Seed is expected to be available in five to seven years, with oil available for use by the food industry in five to 10 years.

Benefits: The effectiveness of phytosterols in lowering low-density lipoprotein cholesterol in humans has been established by medical research. Phytosterol-containing foods with therapeutic claims have been approved by the FDA and are now available in the marketplace. "Our objective is to broaden the health benefits of the canola oil, and help to generate added value to producers and processors," researcher Jitao Zou says.

Samples: Samples should be available for evaluation in a year.

What: (i) XCEEDTM canola-canola-quality Brassica juncea with the Clearfield® production system and (ii) high-stability B. juncea.

How: Conventional plant breeding was used, including mutagenesis, for both varieties. (i) Oriental mustard (B. juncea) was converted to XCEED canola by reducing the erucic acid and glucosinolate content and raising the oleic content to be equal to those found in canola from B. napus. These changes were made by exploiting rare fatty acid variations within B. juncea and interspecific crossing with B. rapa to reduce the glucosinolate content. Clearfield technology provides resistance to imidazolinone herbicides. This trait was created by interspecific crossing with B. napus and mutagenesis. (ii) High-stability XCEED canola has a high oleic acid content and reduced polyunsaturated fatty acid content. Mutagenesis has been used to create this trait. All production is classed as nongenetically modified in international markets.

Benefits: (i) XCEED canola has greater heat, drought, and frost tolerance than other canola cultivars, which expands and stabilizes canola production and therefore the supply of canola oil. XCEED canola has low seed chlorophyll content, which reduces the cost of refining. XCEED canola protein has been found to be suitable for food applications. The seed has a yellow seed coat with low fiber content, which provides a high-quality meal with good protein digestibility. (ii) High-stability oil will not oxidize as quickly as traditional canola, which reduces the need for hydrogenation and thereby reduces trans-fat content in the oil.

Product  (i) In test crushes conducted on canola-quality B.

summary: juncea, the US Food and Drug Administration (FDA) and Health Canada found that the oil produced was equivalent to canola oil from B. napus and B. rapa. Likewise, the FDA and the Canadian Food Inspection Agency says the meal was acceptable as canola meal. Subsequent studies conducted by the Canola Council of Canada have shown that the meal has good palatability and superior protein digestibility. ( ii) High-stability B. juncea has not yet been fully evaluated. However, conventional canola-quality B. juncea oil has been found to have good oxidative stability in comparison with conventional canola oil from B. napus (Journal of the American Oil Chemists' Society 85:693-699, 2008).

Samples: XCEED samples are available for evaluation. High-stability B. juncea samples should be available in 2012.

Catherine Watkins is associate editor of inform. She can be reached at cwatkins@aocs.org 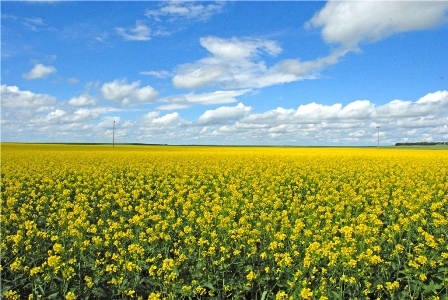 A field of Xceed canola in Canada. Courtesy of Viterra Inc.