Dealing with the media: A cautionary tale

Go to the Turner Classic Movies website and you will find this statement: "We have the following four movies starring Larry Johnson available."

Such words are not usually seen in conjunction with the name of an eminent food scientist such as Lawrence A. Johnson, a former AOCS president who is a professor and director of the Center for Crop Utilization Research at Iowa State University (ISU; Ames, USA). Johnson appears on the Turner site because of a roughly 20-second interview with him-edited down from two hours-in the 2008 documentary Food, Inc.

From two hours to 20 seconds

Here is a transcript of Lawrence A. Johnson's comments, as presented in the movie Food, Inc. There is one clear edit (identified); there may well be others.

We are now engineering our foods. We know where to turn to for certain traits like mouthfeel and flavors, and we bring all of these pieces together and engineer new foods that [EDIT] don't stale in the refrigerator, don't develop rancidity. And, of course, the biggest advance in recent years was high-fructose corn syrup. You know, I would venture to guess if you go and look on the supermarket shelf, I'll bet you 90% of them would contain either a corn or soybean ingredient. And most of the time they would contain both.

Johnson is no stranger to media appearances. He participated in the History Channel's Modern Marvels program on corn in 2007 and the Discovery Channel's HowStuffWorks program, also on corn, in 2008. He has given countless interviews for magazine and newspaper articles and has never before had a problem. And therein lies a cautionary tale.

For those who have not yet seen the movie, here is a quote from the media kit: "In Food, Inc., filmmaker Robert Kenner lifts the veil on our nation's food industry, exposing the highly mechanized underbelly that's been hidden from the American consumer with the consent of our government's regulatory agencies, US Department of Agriculture, and Food and Drug Administration." The movie features lengthy interviews with well-known food activists such as Eric Schlosser (author of Fast Food Nation), Michael Pollan (author of Food: An Eater's Manifesto), and Stonyfield Farms' Gary Hirschberg. Together, they make a case against modern agribusiness, minus any dissenting opinions.

"I do not support the political positions that the movie advocates," says Johnson. "To be front and center in it is disappointing," he adds. "I worked my whole career to better the food industry, to better what is available to consumers, and to support sound science."

When the movie producers approached Johnson and ISU, however, the fact that the producers were not interested in balance or fairness was not clear. Taking two hours out of his busy schedule, Johnson spoke on camera about the marvels of food science.

"I talked about what wonderful things corn does for consumers and for the food industry," he said, adding that he could tell halfway through the interview that the result was not going to be positive. "I tried to educate them about today's consumers-that they are after convenience, diversity, and safety of the food supply. Those attributes really cannot be delivered without using food ingredients. And corn and soy are a wonderful source of food ingredients."

Johnson also objected to the producers' suggestion that the food industry limits consumer choice. "That just is not true, and I tried to tell them that. The food industry reacts to what the marketplace wants."

In the end, the producers edited together several of Johnson's many comments, creating a sound bite that in itself is not damning to the industry but serves as a jumping off point for the film (see box on page 137).

"ISU and I continue to believe it is important to be transparent, to communicate, and to participate in discussions that are grounded in sound science," Johnson said. "This experience, however, shows that we have a lot of education to accomplish, especially when media events like Food, Inc. want to make an issue black and white, and if you disagree with how they've crafted their viewpoint, you're on the wrong side. People do need to make their own decisions, but I am hopeful they seek out unbiased, scientific sources.

"Too many people are too far away from the farm. Very few of them understand the food industry. We need to be more proactive in educating people about agriculture and the food supply," he continued.

Johnson is not the only party who feels ill-served by the movie's producers. Seed giant Monsanto Co. dedicates a portion of its website to refuting the idea-splashed across the movie screen in large type as ominous music plays-that the company declined to participate in the film.

Darren Wallis of the Monsanto public affairs department is the person who took the call from the producers requesting that Monsanto participate. Wallis writes in his blog (http://tinyurl.com/lxmaqd) about asking a number of questions of the producer: "Who would be in [the movie]? Who would present the opposing view? Who was funding the film? Would the film present balance and fairness or present one side of the story?"

Over several weeks of correspondence with the producer, Wallis never felt he had answers to those key questions. Even so, Monsanto invited the producer and a film crew to a trade show "to learn more about Monsanto, agriculture, and talk with farmers," Wallis notes in his blog. "They opted not to come to the show."

Tellingly, inform emailed the producers of Food, Inc. several times, asking for their response to Wallis' statements. The producers opted not to respond.

Dealing with the media

Most journalists and documentarians are dedicated to providing fair and comprehensive accounts of events and issues. Case in point: Stephen Schneider, a climatologist at Stanford University who studies climate change, told Nature (461:848, 2009) that only twice out of the roughly 3,500 interviews he has given has he been "set up" by unethical journalists.

Twice is two times too many, however. The best way to avoid being used is to spot hidden agendas before you say "yes" to an interview. After all, interviews-once given-cannot easily be withdrawn. Trying to withdraw them can actually draw more media attention to a partisan project and your part in it. So do your homework, by using these tips, before agreeing to be interviewed.

BEFORE AGREEING TO THE INTERVIEW

1.     Do not take cold calls. Understand the journalist's topic and slant first and call back before deadline. You may well not be the right expert for the interview.

2.     Ask about starting assumptions and the proposed audience.

3.     Research the previous work of the journalist and any companies behind the project. Look for a partisan or sensational tone. If you sense a lack of balance, do not accept the interview.

PREPARING FOR THE INTERVIEW

3.     Practice transitional bridges such as "what is important here is," or "the real issue is," or "that is a good question, but what is really important is . . . ."

1.     Do not say anything you do not want to have repeated. There is no such thing as "off the record."

5.     If you are being quoted in a print piece, ask to have the quotes read back to you. (Do not ask to see the story before it goes to print.)

6.     Double-check the journalist's understanding of the science during the interview.

1.     Send written materials, if applicable, after the interview.

2.     If your meaning was not conveyed accurately, let the reporter know (in a helpful, nondefensive way).

3.     If the misstatement is serious, call or write a letter to the editor.

4.     Keep a record of all your interviews. List the journalist's name, affiliation, phone number and/or email address, and story idea, along with your talking points. Rate your performance and try to do better next time.

Catherine Watkins is associate editor of inform and can be reached at cwatkins@aocs.org. 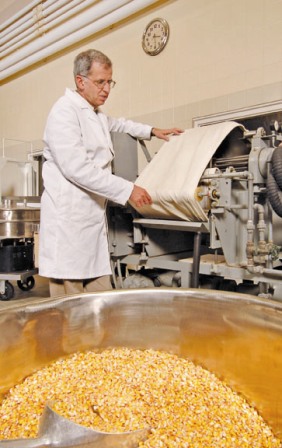 Lawrence A. Johnson, a professor and director of the Center for Crop Utilization Research at Iowa State University (ISU; Ames, USA), is pictured in an ISU dry processing pilot plant. The 2,600-square-foot pilot plant is designed for the experimental processing and scale-up of industrial milling, cooking, dry separation, drying, and extrusion systems for grain processing and other industrial processes. Photo courtesy ISU/Bob Elbert.